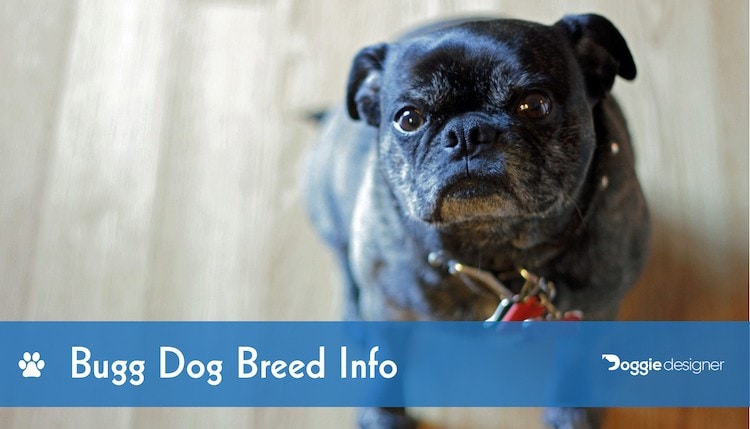 It’s hard to picture a dog that’s more adorable and playful than the Bugg. If you’ve never heard of this cute pup before, you’ve certainly heard of its parents — the Pug and the Boston Terrier. Both cute as well, the Bugg takes its traits from both parents, resulting in a bug-eyed Bugg dog with a flat face and a loving, playful temperament.

These small dogs come in a variety of colors. They can be mostly one color with patches of another color thrown in, such as a tan dog with black ears and snout or a white dog with brown and black patches at random. Or they can be multi-colored from head to toe, sometimes even turning out brindle. Some even inherit the classic Boston Terrier patterning.

Great for novice pet owners, these dogs don’t require too much care, though they will need a lot of attention. They have short coats and don’t shed very heavily, so they’re good for people who suffer from mild allergies, but they’re not hypoallergenic.

Bugg Puppies – Before You Welcome One Into Your Family…

With an average height of just 16 inches, these are very compact dogs that will never outgrow your lap. They’re highly energetic and love to play around, but because they’re so small, they don’t require much exercise. Their antics will meet the majority of their physical activity needs, so they’re perfect for people living in apartments or other smaller spaces where a large, active dog might be too confined.

Bugg dogs are lovers at heart, perfect for families and individuals alike. But they can become quite territorial over their owners, an issue that needs to be addressed quickly. They’re intelligent dogs that can be trained quite well, though they often tend to be stubborn like the Boston Terriers they’re bred from, meaning you’ll need a patient hand to work with these dogs.

Though they get along great with family members and other people, Buggs are attention hogs, preferring to always be center stage. Because of this, they don’t always get along well with other pets, so they’re best-suited for households where they’ll be the only pet.

1. Their Eyes Could Literally Pop Out of Their Head

One of the traits that people find most adorable about the Bugg is its big, protruding bug eyes. Both parents have similar eyes that seem to pop out of their heads, but ironically, those eyes could literally pop right out of their heads!

It may seem crazy, but it has happened. These dogs are what’s known as a brachycephalic dog breed. This means they have flat faces, short snouts, and shallow eye sockets. Both Pugs and Boston Terriers are brachycephalic as well, which is why this issue is rampant in the Bugg breed.

Because of the shallow eye sockets, their eyes can pop out of their sockets due to a condition called proptosis. It happens most often when the dog is playing or fighting with other dogs.

2. They Tend to be Territorial if Not Trained Early

Dogs often take on the traits of their parents. Boston Terriers are known to be territorial of their owners and environment, and the Bugg dog can often display the same behavior. If you get a Bugg, you’ll want to train them early on and socialize them with many other people and pets so that they don’t develop that territorial streak. If they do, it will be very hard to break them of it later.

3. They’re Officially Called Buggs, But Some Call Them Pugins

Temperament & Intelligence of the Bugg Dog 🧠

Overall, Buggs are known as highly intelligent dogs. They’re also very playful and energetic, loving to goof around and act a little nutty. They’ll cuddle up against you while you watch a movie, but they’ll be happy to get up at any point for a quick play session.

Friendly with just about all people, Buggs are great pets for a family. They need a lot of attention that a family can easily provide. But they do bond closest with one person, so they’ll probably pick a clear favorite. Still, they get along great with kids and guests, so long as you don’t allow them to become territorial while they’re young.

As a dog that prefers to be the center of attention, Buggs aren’t the best with other pets. However, they can be trained to get along well with others, provided they’re properly socialized from a young age. If you let a Bugg grow older without proper socialization, they can be very territorial and may be aggressive towards other animals in their home.

Things to Know When Owning a Bugg:

Because they’re a smaller breed, Buggs will do well on a dry food mix that’s intended for smaller dogs. They don’t have any particular dietary requirements, but they do tend to overeat. You’ll want to be conscientious about how much food you’re giving a Bugg throughout the day so that they won’t become overweight. These dogs will generally continue to eat whatever they’re given, so it’s up to you not to overfeed them.

Small and energetic, these dogs don’t require too much exercise. They’ll get a lot of physical activity from running around and being nut jobs, as well as playing with you. A short walk each day should provide plenty of exercise on top of regular playing and their own general silliness.

Buggs are highly intelligent dogs that can learn very quickly with proper positive reinforcement. However, they don’t respond at all to negative reinforcement, which is akin to animal abuse with these dogs.

Be sure to begin training Buggs early as they can develop a stubborn streak like Boston Terriers if they’re allowed to. You’ll need to be firm but positive with your Bugg. It may require a lot of patience and determination.

Buggs have very short, fine coats. They don’t shed very much, so you won’t have too much mess to clean up. However, they’re not hypoallergenic because they do shed some. To keep their coat free of dead hair, simply brush or comb them once a week or so.

Aside from regular combing, you’ll need to remember to trim your Bugg’s nails as well. But overall, these dogs are easy to care for and don’t require much maintenance.

The Bugg dog breed is a brachycephalic dog just like both parents. This means they have flat faces with protruding eyes. While this look is very popular and these dogs have been bred to continue the trait, it can also result in health complications such as breathing difficulties and eye problems.

Brachycephalic dogs have shortened bones in their faces. When this causes abnormalities in the upper airways, the condition is known as brachycephalic airway syndrome. There are several conditions that get grouped under this name, including stenotic nares, extended nasopharyngeal turbinates, a hypoplastic trachea, and several others.

All of these conditions can make it very difficult for your dog to breathe. Most dogs affected by this syndrome will breathe through their mouths more easily than their noses. They may have very loud breathing and will often snore when sleeping and snort when excited. This syndrome can develop into secondary problems and even put an increased strain on the heart from the increased effort required for breathing.

Brachycephalic ocular syndrome is also another big health issue to look out for in your Bugg. This syndrome is also a collection of conditions that can include medial canthal entropion, epiphora and tear staining, trichiasis, and more. This condition is marked by the protruding eyes commonly seen on these breeds. It can prevent the dog from blinking and may be very uncomfortable. It can also result in decreased vision.

Brachycephalic dogs like Buggs may also experience an eye proptosis. Because they have shallow eye sockets and protruding eyes, their eye may actually come out of the socket. It can happen during play or roughhousing, and sometimes it doesn’t take much pressure. The result is the total loss of an eye, forever marring the dog’s face and drastically affecting their vision.

On a lighter note — no pun intended — Buggs love to eat and are known to overeat if given the opportunity. While all animals are susceptible to obesity with prolonged overfeeding, Buggs are more likely to develop this condition than most. Be sure to monitor your Bugg’s food intake. If you provide them more feed than needed, they’ll likely still eat it.

Male Buggs tend to be a bit more stubborn and high energy during their teen years. Once they reach the age of three, they usually calm down and become more relaxed like females. For this reason, female Buggs are generally a bit easier to train, especially when they’re still puppies.

Physically, male Buggs tend to be a bit heavier while females are more slender and slightly shorter as well. Females also live a little longer on average, though the difference is small.

A breed that’s as adorable as dogs get with an energetic personality that’s always ready to play, Buggs can provide excellent companionship. They bond closely with a single person but love everyone, so they’re great for families. Take care to train and socialize them early so they don’t become territorial or stubborn.

While the flat face and bulging eyes might be a cute look, it also comes with some inherent health risks. If you’re going to own a Bugg, be sure that you’re aware of what potential health issues may arise and how you’re going to take care of them.