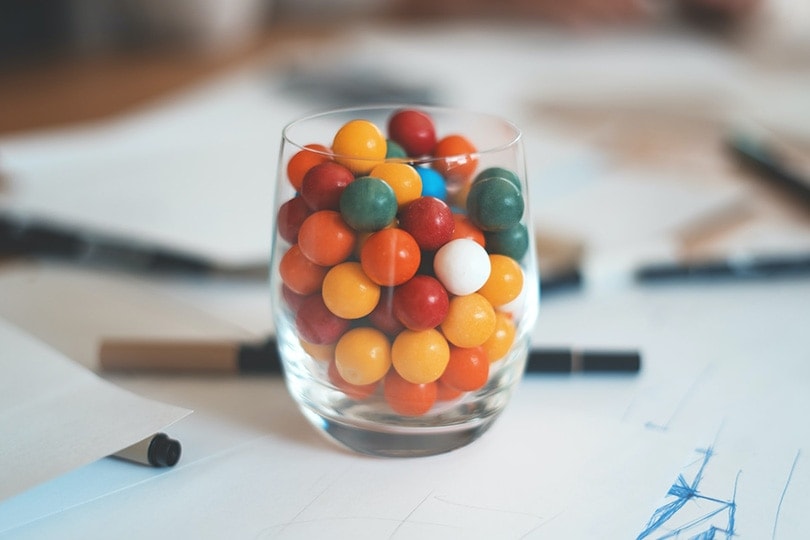 When we were young, we were always scared witless by the perceived dangers of swallowing gum. Our older cousins told us it would stay in our stomach for 80 years, or we would begin farting out gum bubbles! But in reality, ingesting gum doesn’t do much to harm us. Still, many gums on the market are known to be highly toxic to pets due to the added sweetener xylitol.

While Xylitol is proven to be toxic to the point of fatality to dogs, the effects on cats are less known, with many reputable sources citing totally different responses! We’ve explored the ins and outs of potential harm from your cat eating gum so you can be best informed about potential risks around your household.

Risk of Gum for Cats

A key ingredient for many gums on the market today is a sweetener named xylitol. Technically a sugar alcohol, it’s naturally derived from plants. For humans, it’s supposed to be a healthier alternative to sugar as it contains fewer calories, doesn’t contribute to cavities, and does not interfere with blood sugar levels. For those reasons, it’s prevalent in many of the popular sugar-free gums you can buy from the store.

Cats are not very well-known to eat many random things in the household (not like the usual family labrador!), so there are not many cases of gum-eating cats to draw conclusions from. Our research shows that vets will generally tell us xylitol is toxic to cats simply as it is proven to be highly toxic to dogs. But other sources, including this scientific study, conclude that the effect of xylitol is may not be a concern in cats.

The toxicity in dogs causes a spike of insulin and a dangerous drop in blood sugar levels, causing hypoglycemia. Liver failure tends to follow if the blood sugar levels are not correct quickly or too much xylitol is consumed that the effect cannot be reserved. The toxicity levels of many gums are incredibly dangerous and often fatal to dogs, so it’s no wonder that many vets would want to advise to exercise the same caution with our cats, regardless of concrete scientific evidence.

Xylitol can be named under alternative names on the ingredients list of products, including:

Related: Can Cats Eat Stevia? What You Need to Know!

Xylitol can also be found in many other items around your home, so always check the ingredients of things you bring into the home when you have pets.

Products that may contain Xylitol

Have you ever been chewing a piece of gum and accidentally almost inhaled it to the point it gets caught in the back of your throat? Pretty visceral rhetorical question I know, but if you have, you will know that even the smallest item like a piece of gum can cause a serious chase of choking.

Now imagine that same small piece of gum but in the mouth of your wee furry friend! They’re a lot smaller than you are, and the risk of choking a soft, sticky piece of gum can be a lot higher for them. Even after recovering from choking, cats can have lasting brain damage depending on the length of time they were deprived of oxygen.

Another risk is that gum is simply not made to be digested. Its chemical makeup can’t be broken down by humans, and especially not cats. In the best-case scenario, ingested gum will simply pass through and be pooped out whole. But gum also has the risk of causing a blockage in the digestive system. This won’t allow anything to pass by it and cause the impaction of ingested foods behind the blockage. Impacted gum may also harden and irritate the intestinal wall, potentially causing tears or bleeding.

What Should I Do If My Cat Eats Gum?

If you suspect your cat has eaten some gum, immediately take it to the vet.

In addition, immediate support can be provided from the ASPCA’s Animal Poison Control Centre. (888-426-4435)

It can be frightening we see our pets eating something they shouldn’t, as regular cat owners knowing the full extent of risks is unlikely so getting professional help is absolutely vital. A veterinary will be able to treat and monitor your cat for signs of toxicity or impaction. A proactive approach is better and safer than waiting to see how it goes.

While there is no substantial proof that gum will cause toxicity in your cat, there is also no proof that it will not! Furthermore, there are risks associated with the gum in your cat’s intestinal tract that extends beyond the gum’s ingredient list.

Little is known about the potential effects of gum on cats because, fortunately, cats are not all that fussed about eating gum. It’s not very common for them to eat something so strange such as a minty stick of gum, but it’s still best to keep it away from somewhere they may get a hold of it.

Can Cats Eat Cake? What You Need to Know!

How To Tell If A Stray Cat Is Pregnant? 8 Possible Signs