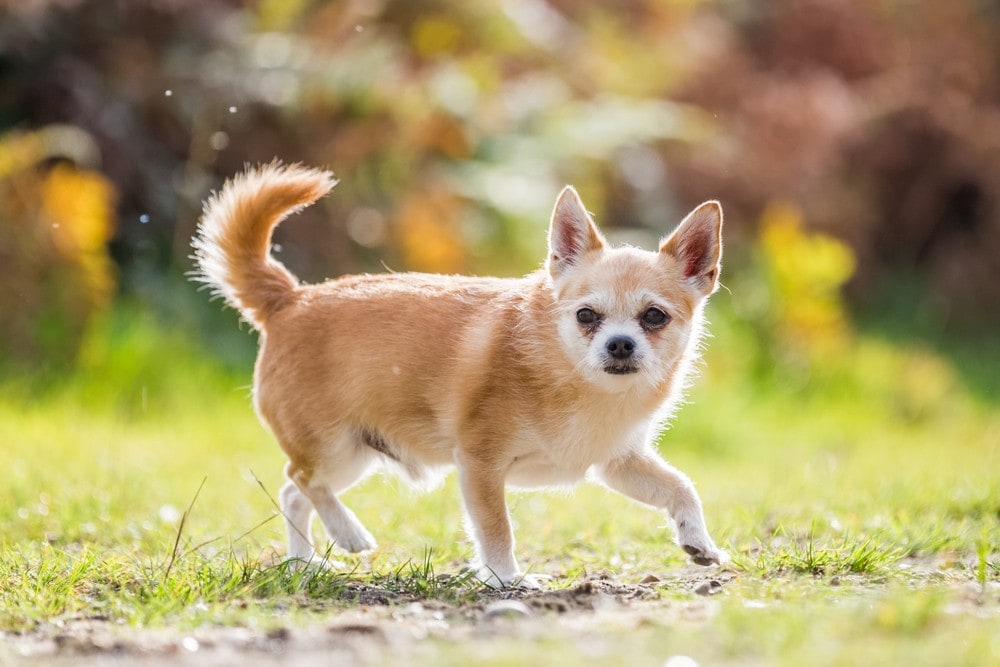 This is a relatively new mixed designer dog breed that is the result of breeding the Chihuahua and the Yorkshire Terrier together.  Thought to have been created for the first time in the 1990s, the Chorkie is one tiny mixed breed that anyone would have a hard time turning away. But this hybrid breed has as much personality as it does looks, so owners can expect lots of love, fun, and stubbornness as their Chorkie puppies grow up.

The Chorkie is a mixed toy breed that is highly active, but because of its size, it can thrive when living life predominantly in an indoor setting. Of course, these dogs love their regular outdoor walks and activities, but they can handle a couple of days cooped up indoors as long as they’re allowed to run and play.

This is a loyal and caring mixed breed that gets along well with children who are old enough to train them and portray themselves as a pack leader. Young children excite these pups which can lead to mischief and destruction before all is said and done. This is also an independent hybrid dog that enjoys lots of human attention and can get along with other animals in the household’s pack.

Chorkie Puppies – Before You Welcome One Into Your Family..

Chorkie pups are full of energy but they also need their downtime to avoid overexertion throughout the day. They like to be mischievous whenever possible, so obedience training should be a priority for anyone who considers adopting this adorable mixed breed. This hybrid breed doesn’t require a lot of food, but it does crave lots of attention. The following are a few other things you need to know about the Chorkie.

1. They are Kind of a Mystery

The Chorkie doesn’t have a significant history, at least not one that has been authentically recorded. So, while this mixed breed is especially cute, it is not especially valuable.

2. They Come in Many Colors

The Chihuahua and the Yorkshire Terrier may be born with coat colors that their owners would expect, but the mix of these breeds can result in unexpected colors that could surprise (yet delight) owners.

3. They Require Lots of Grooming

Chorkies are not particularly cleanly so you likely won’t witness them spending a lot of time licking and grooming themselves. Therefore, owners should expect to commit to daily groomings and to bathe their Chorkies at least once a month to keep them clean, especially if a lot of time is spent outdoors.

Temperament & Intelligence of the Chorkie 🧠

While the Chorkie is gentle and loving, an excitable and energetic little being seems to always be lurking right behind the scenes. A good combination of play and downtime is an effective lifestyle pattern to adopt when enjoying life as the owner of this lovely mixed toy breed. Chorkies are very smart, so you can expect them to pick up fun games like fetch quickly. But they are also pretty stubborn and they’re also easily excitable, which can make training a longer and harder road than most owners might like.

However, with commitment and daily practice, any Chorkie can effectively learn how to sit, stay, and heal. The Chorkie tends to respond best to positive reinforcement and they rarely need a firm hand to maintain acceptable behavior. All that’s usually required to keep this mixed breed obedient is some regular training practice and a stable home.

Chorkies are quick to cuddle up with their human or animal counterparts, especially when it’s cold outside. But this breed also expects to have the opportunity to play and chew on things throughout the day. So, pick your slippers and magazines up, and make sure plenty of chew toys are available for enjoyment throughout the house.

The Chorkie can be a good family dog, but they like to bark, chase, and nip, so they aren’t the best choice for families with very young children. Kids who can’t verbally speak commands or who are not comfortable with being a leader of the dog should be carefully supervised while spending time around a Chorkie.

This lovable little mixed breed enjoys some snuggle time on the couch, but they especially appreciate the adventurous spirits of their human family members and would prefer spending time playing outdoors than lounging around like a lump on a log inside the house. They aren’t big enough to be guard dogs, but the Chorkie is known to work as a protector of their family whenever possible.

Chorkies generally get along with other dogs that aren’t aggressive by nature, but it’s a toss-up when it comes to getting along with other animals like cats. Chorkies tend to be jumpy and yappy, which is something most cats don’t want to hang around. But if this breed is introduced to other animals from the time when they are puppies, they should be able to adapt to a life shared with other dogs, cats, hamsters, or other pets.

Things to Know When Owning a Chorkie:

The Chorkie may be a small mixed breed, sometimes even considered a “toy” breed, but it sure is big in personality. You won’t find many Chorkies being lazy in the corner or spending the whole day cuddled up in front of the fireplace. They’ll make you laugh many times, they may drive you crazy sometimes, and they will always melt your heart. Here are a few other things you should know about owning a Chorkie.

Because of the small stature of this mixed breed, the Chorkie doesn’t need to eat a lot of food each day. However, they are pretty active so they should eat multiple small meals a day to keep up with their energy requirements. A cup or so of dry dog food should suffice when this breed is full-grown, give or take.

Some Chorkies do well with unlimited food access throughout the day, while others tend to overeat and gain weight as time goes on. The way this breed tends to eat depends on their individual personalities, energy levels, and overall lifestyle. A veterinarian can recommend the appropriate amount of food to feed your Chorkie during each growth stage throughout their life.

This amazing little mixed breed loves to run and play, so they do a good job of exercising themselves most of the time. However, it’s important for Chorkies to get regular walks for brain stimulation and obedience reinforcement. The Chorkie doesn’t need a yard to play in, although they wouldn’t complain to have one. Exercise time can be completed indoors with the help of a ball for fetch, a puzzle toy, and a training instruction book or DVD.

This mixed breed isn’t big enough to be intimidating or dangerous, but it still benefits from obedience training at a young age. The Chorkie is playful and happy-go-lucky, which can make it tough for this breed to focus during training. So, training should be done in a quiet and secure place that is free of outside stimulation. And training should be practiced regularly to continue reinforcing the skills that are learned as time goes on. Socialization training is also a good idea, as the more your Chorkie is used to meeting new people and animals, the more friendly they will be.

The Chorkie tends to take after its Yorkshire Terrier parent when it comes to their coat. This means that they typically require daily brushing to keep the tangles away. This mixed breed doesn’t shed much, so it shouldn’t be too much of a chore to keep the house free of hair buildup.

Some owners choose to have their Chorkie’s hair trimmed or cut, while others decide to let it naturally evolve. The choice really boils down to personal preference. Like most other dogs, this breed needs some help keeping their ears clean. Wiping the lobes with a damp cloth once every couple of weeks should do the trick.

The Chorkie isn’t a particularly unhealthy dog by nature, but there are a few health conditions that owners should be aware of when bringing their pups home for the first time. In fact, a veterinarian should do testing to ensure that young Chorkies aren’t already developing any of the listed health problems here before they are officially adopted.

Some owners complain that their female Chorkies tend to bark more often than their males. Male Chorkies are sometimes more independent and confident than their female counterparts, whereas the girls seem to be the ones to compete for their owners’ attention. But these are not hard and fast rules. Many owners find that the opposite of these gender associations is true in their homes.

This is one tiny mixed dog breed that shouldn’t be overlooked by those who are looking for a fun-loving, loyal, and social furry family member to share their life with. These little fellas may have feisty attitudes, but they are full of affection and inspiration.

They make great friends for older kids, and they’ll help ensure that grandma doesn’t get lonely now that she’s living alone. While they do require lots of love, attention, and training, all the work you put into caring for your Chorkie will result in a caring, obedient, and safe pet that your entire family is sure to appreciate.