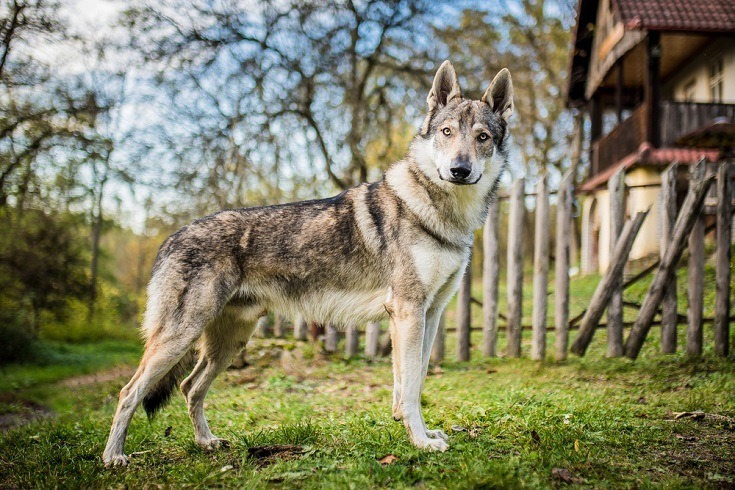 The Czechoslovakian Wolfdog is often described as being as close to a wolf as you can get in a family pet. He looks identical to his wild parent, is known for being very stubborn and difficult to train, but can make an excellent family animal. The Wolfdog was initially bred by combining wolf with the German Shepherd. He should only be considered by experienced owners and handlers, ideally those with experience owning a wolf-like dog.

The Wolfdog will enjoy having a large outdoor space, and they have been bred to cope with cold and harsh conditions. He can be quite docile at home, which means that the Czechoslovakian Wolfdog will actually adapt quite well to apartment living. However, this breed can be aggressive, and this means that you must train and socialize them from an early age, and continue with this regime throughout their lives. They will also benefit from regular agility and other exercise classes that stimulate their brain and body.

Czechoslovakian Wolfdog Puppies – Before You Welcome One Into Your Family…

1. Their existence is the result of an experiment.

In the 1950s, an experiment was undertaken to see if the wolf could be bred with a domesticated dog. The German Shepherd was chosen as the domesticated dog breed and was bred with a Carpathian Wolf. Experiments continued for ten years and in 1965, plans were drawn up to further develop the resulting breed. The breed itself wasn’t recognized in Czechoslovakia until 1982, while the United Kennel Club first recognized the breed only in 2006.

The Czechoslovakian Wolfdog is halfway between a domestic dog and a wild wolf, and it retains a lot of characteristics that are prominent in wolves but not seen in dogs. For example, they typically only come into heat once a year, and puppies are only usually born in winter. Also, the Wolfdog does not bark. It does make wolflike sounds, for example howling and baying, but for this breed to bark, it must be trained to do so. Because the bark is not a natural sound for the breed, it can be very difficult for the dog to be taught, usually having to learn the skill from another domestic dog.

3. The Wolfdog is very difficult to train.

There are several reasons why this breed is not considered suitable for first-time owners. It can be aggressive, will not usually mix well with other animals, and although it is trainable in the right hands, the breed is widely considered to be extremely challenging to train.

Remember that the Wolfdog is essentially a half-wild animal, which means that it is like trying to train a wolf. It is highly independent, so it must see the benefit of performing a given task or command, otherwise, it is unlikely to do so. It also bores very easily, so training must be kept short and it should be as much fun as possible for the dog. Despite the difficulty posed by the breed, new owners must start to train the dog as early as possible.

They can become well-adjusted and loyal family members, but they need to learn boundaries and they need to be taught good behavior. They should also be subjected to early and ongoing socialization to prevent any aggression towards strangers and other dogs.

Temperament & Intelligence of the Czechoslovakian Wolfdog 🧠

Early breeding efforts of the Czechoslovakian Wolfdog were centered around trying to breed the most favorable characteristics of its parent breeds, but it still retains a lot of wild habits of its early ancestors. So, you should expect it to act wilder than any other domesticated dog. The Wolfdog can be extremely loyal to its human, and it can adapt well into the family. The breed is especially well suited to life outdoors but can adapt well to apartment living, as long as you are willing to give them regular exercise.

The Wolfdog can make an excellent family pet. He will usually form a strong bond with his family members, although you should always take care when homing this breed with children. Also bear in mind that he does still have wild wolf DNA coursing through his veins, which means that he can be very suspicious of strangers. If he perceives a threat, he may become aggressive, and he may see a threat if your child is playing with a friend. This type of breed is usually better suited to life with one person or a couple.

The Wolfdog can be introduced to other dogs, although this should be done slowly and cautiously, ideally when he is still a young puppy. If he has a wild side, your Wolfdog is likely to chase any other type of animal, and it is not recommended that you keep this breed with cats or smaller pets.

Things to Know When Owning a Czechoslovakian Wolfdog:

The Czechoslovakian Wolfdog is a skilled hunting dog and working dog. He is still used for border patrol and other, similar tasks. He can also be a loving and loyal family member, but this breed is definitely not suitable for all potential owners. You need to be realistic and ask yourself whether he is suitable for your lifestyle. Take the following factors into account when deciding whether this is the right breed for your home.

Active and lively, the Czechoslovakian Wolfdog has a good appetite and will eat between 3-4 cups of food a day. If he is active, expect to feed at the upper end of this scale. Wolves eat meat, and your Wolfdog will benefit from a diet that is rich in meat-based protein, although he is an omnivore so he can and will eat plants and vegetables, too. Measure your dog’s food and feed over two or three meals a day to prevent him from putting too much weight on.

The Wolfdog is not actually as demanding of exercise as some other breeds, but he does need to get out and stretch his legs. Expect to walk 2-3 miles every day, and if you can provide him with the opportunity to get off-leash and prowl, he will appreciate it. His strength and agility make the Wolfdog suitable for activities ranging from sled pulling to hunting, and these can help keep him agile and alert.

One of the most challenging aspects of owning this breed is training him properly, but it is also one of the most important aspects. Living with an untrained Wolfdog is effectively like living with a wild wolf. He needs to have boundaries, he needs to know that you’re in charge, but you should not train aggressively or unfairly. Be consistent, get professional help if required, and do not consider this breed for your first dog.

Regular bathing should not be necessary because the Czechoslovakian Wolfdog is naturally odorless. He does require brushing, usually once a week, and he can shed heavily at certain times of the year. Starting from a puppy, you should clean his teeth three times a week, while checking that his nails do not grow too long.

Generally a hardy and healthy animal, the Wolfdog is prone to some genetic conditions, including those that he picks up from his German Shepherd ancestry. Look for symptoms of the following and get veterinarian checks if your dog shows any signs.

Males will usually grow a little larger than females. Some owners also believe that the male tends to be more aggressive, but that they are more likely to form a strong bond with their family. Training, socialization, and individual traits are usually more important, in determining characteristics, however.

The Czechoslovakian Wolfdog is the closest domesticated animal to a wild wolf. They look almost exactly like the Carpathian Wolf that they were bred from, but the German Shepherd has helped to domesticate them, at least to some extent. The breed is illegal in some states and can show signs of aggression, usually towards strangers, and if they sense any form of danger. They do form a close bond with their family, however, and if you have experience in training this kind of breed, they can become excellent hunting or working dogs.