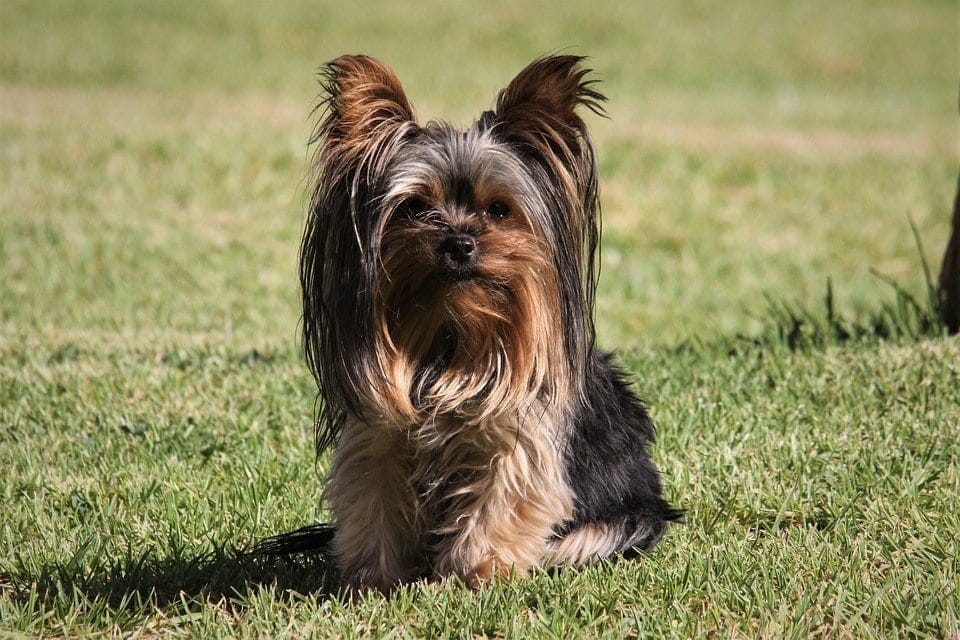 The Yorkshire Terrier is one of the most popular dog breeds, coming in at 12th place on the American Kennel Clubs 2019 list.  They are also the smallest breed of Terrier and one of the smallest breeds of dog overall. The Yorkie is small in size but big in personality and is energetic, confident, feisty, and full of unique characteristics. They make great family pets and are highly affectionate and loyal to their owners. The gorgeous long coat of the Yorkie, plus their larger-than-life personality, make them an adorable and popular dog breed.

Purebred dogs can be expensive, however, and Yorkshire Terriers are no different. If the price is an issue, or you are looking for a similar yet different breed of dog to bring home, this list is for you. Below is our comprehensive list of dogs that look like and are similar to the Yorkshire Terrier.

The Silky Terrier and Yorkshire Terrier breeds are often confused and for good reason. Both are usually tan-colored, with straight, silky, human-like hair, and are similar in size. You’d be forgiven for mistaking one for the other, as the only real physical difference is the less rounded head shape of the Silky, slightly larger teeth and mouth, and ears that are larger at the base. The Silky’s head hair is the biggest giveaway, with their distinct middle parting. They are both Terriers, so temperament hardly differs between these two breeds.

The Australian Terrier is similar to the Yorkie, but with a few distinct differences. They are also confident dogs with big personalities, and their differences are mainly in appearance. That said, while Yorkies are generally friendly toward other dogs and pets, the Australian Terrier prefers to be the only dog in the household. They have a longer torso and neck than Yorkies, with a coarsely textured coat. This makes them low maintenance and easy to groom. The Australian Terrier does have more of a tendency for barking than a Yorkie.

Norwich Terriers have their origins as ratters on farms, named for their hometown of Norwich in England. These are tough and fearless yet highly affectionate dogs who get along well with other pets and children. They are high energy and require a great deal of exercise to stay happy and out of trouble. They also love to be around their owners and are known to suffer from separation anxiety if left alone for long periods.

One of the oldest Terrier breeds, the Cairn Terrier gets its name from its hunting origins, chasing and hunting game between cairns in the Scottish Highlands. They have a shaggy and wiry coat, a short, wide head, and short legs. They are highly independent dogs, but they still love to snuggle on their owner’s lap and have plenty enough energy to play outside. In fact, they must get a large amount of mentally stimulating play, due to their hunting origins.

Most commonly known as the “Scottie,” these little dogs are full of personality, alertness, and confidence, just like Yorkies. They are usually described by their owners in human terms like “dignified” and “proud,” and they go about their daily routine in a “businesslike” manner. They are short-legged, stocky dogs, with distinctive feathering on their legs, beard, and lower body. They have a medium-length, wiry coat that requires little maintenance. Their strong innate prey drive may be an issue with smaller family pets, but they make excellent watchdogs, as they do not warm up easily to strangers.

The Miniature Schnauzer, like Terriers, was originally bred as a ratter for use on farms. They have distinctive rectangular heads that are adorned with bushy eyebrows and a luxuriant beard. They have short and wiry coats and floppy ears, but these are commonly cropped to stand erect. They are tough and hardy dogs who can be wary of strangers and dogs they aren’t familiar with. That said, they are well-known for their obedience, ease of training, and devotion to their owners. They are generally gentle and loveable toward children and make great family pets.

Commonly known as the Westie, the West Highland White Terrier has a big and bold personality housed inside a fluffy white body. Like most other Terrier breeds, they are intelligent and confident — or more accurately, overconfident. They are easily identifiable by their distinctly coarse and harsh coats, upright ears, and stocky medium-length tails. These dogs are known for their stubborn streak and can consequently be a challenge to train. Their hunting and ratting heritage makes them a problem around other small family pets, and they will require mentally stimulating exercise to stay happy and well-behaved.

Related Read: How Much Does a West Highland White Terrier Cost? (2021 Price Guide)

One of the most vulnerable and rare breeds of Terrier in the world, it is estimated that there are fewer than 400 Skye Terriers left in the United Kingdom. They have their origins in the Isle of Skye in Scotland and were bred to hunt fox and badger. They tend to be shy with strangers and will bond strongly with their owners. They are recognizable by their long smooth coat, which can reach the floor and cover their eyes, and their big fluffy ears that stand up like wings. They have bodies that are about twice as long as they are high.

Also known as Lakies, this Terrier gets its name from its place of origin, the Lake District in England, where they were originally bred to hunt foxes that preyed on the local farmer’s sheep. They consequently have high energy and prey drive and need a great deal of exercise and should ideally be fenced in. Lakies love to burrow and dig and will chase prey down inside holes if given the chance. They are a fairly rare breed, both in the U.K. and the U.S., with fewer than 220 puppies registered with the American Kennel Club in 2016.

Despite its name, the Tibetan Terrier is not a member of the Terrier breed but was given the name by European travelers in Tibet due to their close resemblance. They were originally bred in Tibet as herding dogs, and the Tibetan Terrier developed their long, thick coat to keep warm. Regular grooming will be needed due to this thick double coat. The dogs were traditionally always given as gifts and never sold. These dogs are intelligent and good-natured and make great watchdogs. Their calm temperament makes them great family pets too.

These high-energy little dogs are a mix between the Yorkie and Dachshund and are great with children and other pets. These dogs love regular walks but don’t require huge amounts of exercise. They have an easy-going nature but are notorious for their barking, as they will bark at almost everything. They love to follow their owners around incessantly and will suffer separation anxiety if left alone too long. Their appearance can differ greatly from dog to dog, with the puppies inheriting different levels of similarities from each parent.

The Irish Terrier is considered one of the world’s oldest Terrier breeds and loves nothing more than chasing rodents and small mammals. They are highly intelligent dogs, so they take well to training but can be stubborn at times. They have a longer body and longer legs than most other Terriers, but they still have the loving and loyal temperament of their Terrier cousins.

The Airedale is one of the largest Terrier breeds and is often referred to as the King of Terriers. The breed originated in the Aire Valley of Yorkshire and was bred as ratters and working dogs. Like their Yorkie cousins, Airedales possess an outgoing and playful nature and love to be around humans. They are more high-energy than Yorkies, though, and require a great deal of exercise.