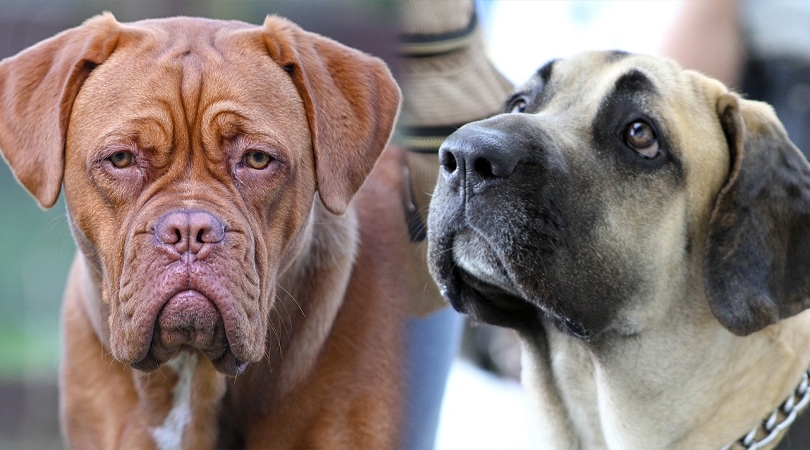 We’ll start right off by saying that the Dogue-Brasileiro is not a dog for everyone. He is a large animal that requires someone who can handle such a muscular and powerful canine. The histories of the Dogue de Bordeaux and Fila Brasileiro tell the story. It’s another reason why it’s imperative to research a breed and the parents of a hybrid.

If you think the Dogue-Brasileiro resembles a Mastiff, you’d be right. That breed, along with the Bulldog and Bloodhound, is part of the Fila Brasileiro’s ancestry, although it’s unclear what his exact origins are. We do know that part of his job was to fend off poachers or jaguars threatening to attack cattle on the vast plantations in the country. That explains his great strength and temperament.

The Dogue de Bordeaux is also Mastiff-like, with a history that goes back to the time of the Romans. His background is violent, too. As his face may suggest, he was a fighting dog before he transitioned into his role as a guardian. Fearless is part of his DNA and explains his fierce loyalty and intensity in his play or work.

Dogue-Brasileiro Puppies – Before You Get One…

The American Kennel Club (AKC) does not recognize the Fila Brasileiro, while it did bestow this status on the Dogue in 2008. It’s worth noting the organization’s view about the former, stating that the Fila “…are so incompatible with AKC sports and events that they will likely never seek, much less achieve, recognition.” The United Kingdom bans the Fila and any dog that resembles it, like this hybrid.

With this background in mind, we strongly urge you to contact your city and county governments to find out if similar regulations exist in your area. We also suggest that you contact your renter or homeowner insurance companies while you’re on the phone. Nevertheless, the Dogue-Brasileiro requires a home with a fenced-in yard. He is not a dog to let off-leash if just because of his strength and energy.

Surprisingly, the Dogue-Brasileiro has plenty of spunk for a dog of his size. Given the pasts of the parent breeds, it makes sense that he’d have to be surefooted whether hunting or fighting. While this pup can handle the heat, the cold, not so much. He also has a keen prey drive with a strong wanderlust potential. Again, it goes with the territory when dealing with guardian dogs. It also explains his independence.

1. The Dogue de Bordeaux left the fighting ring for the farm.

When dogfighting fell out of fashion, the Dogue adapted and ended up as a guardian on the farm. His role herding livestock earned him the nickname, “Butcher’s Dog.”

2. The name of the Fila Brasileiro speaks to his violent past.

The name of the breed comes from the Portuguese word, filar, which means catch. When this dog spotted a poacher, he would take down the offender and hold the perpetrator down until the gamekeeper arrived on the scene.

3. The Dogue-Brasileiro’s black muzzle most likely comes from his Fila roots.

While the Dogue de Bordeaux has a bit of Mastiff in him, the original French standards preferred the pink nose over the black muzzle. Today, the AKC permits these markings.

Temperament & Intelligence of the Dogue-Brasileiro 🧠

While the parent breeds have a violent history, both are quite loyal dogs and tolerant of children. However, early socialization is imperative for any pet but especially with a pup the size of the Dogue-Brasileiro. He is intelligent, so that will make it easier to teach him to obey. It’s essential to establish yourself as the leader of the pack for building trust with this loyal pet.

This pup has a moderate tendency to bark, which you’ll need to curb early. The other thing to remember is that a bored dog is a destructive one and even more so with a pet as large as the Dogue-Brasileiro. He needs mental stimulation just as much as physical activity to cultivate good canine manners.

Are Brasilian Dogos Good for Families? 🏡

The Dogue-Brasileiro can make a decent family pet as long as you take an active role in training and discipline. It’s also crucial to teach children their boundaries with this pup to respect his space when eating. He’s probably not the best choice in a household with little ones because of his size. You should always supervise any playtime with the kids.

Do Brasilian Dogos Get Along with Other Pets? 🐶 😽

We don’t recommend the Dogue-Brasileiro for households with other dogs because of the histories of the parent breeds. The same advice applies to cats and other small animals. Instinct with his strong prey drive may get the best of him. Sometimes, the Dogue-Brasileiro doesn’t realize his massive size or strength, which can lead to unfortunate consequences.

Things to Know When Owning a Dogue-Brasileiro:

As you can see, there’s more to owning a Dogue-Brasileiro than is typical with other dogs. His size and temperament play key roles in his diet, exercise, and training. Fortunately, the requirements for keeping him fit and healthy are not outrageous and in line with what you must do for any other pup. It’s just that his needs are bigger—literally!

A giant dog like the Dogue-Brasileiro needs a diet to match. You should feed him a food meant for breeds of his size. Large pups mature more slowly than smaller ones. Thus, their foods are less calorie-dense to prevent them from becoming overweight. You should also match his life stage with an appropriate diet, whether he is a puppy or an adult.

Offer him three to four meals a day as a pup to ensure that his blood sugar levels stay stable. After all, it takes a lot of energy to be a puppy. Once your pet becomes an adult, you can go two times a day but no less than that. Unfortunately, both parent breeds of the Dogue-Brasileiro are susceptible to bloat or gastric dilatation and volvulus (GDV).

This life-threatening condition can occur if your dog eats or drinks too much at one time. It can cause his stomach to distend so much that it twists on itself. It can stop blood circulation to his GI tract. It’s an extremely painful condition, which requires immediate emergency care. Typical symptoms include unproductive vomiting, obvious signs of distress, and even biting.

The Dogue-Brasileiro needs regular exercise. Since he’s not a candidate for the doggie park, that means daily walks. This routine offers several benefits for both you and your pet. It’s an excellent time to bond, especially if you bring some treats to reward good behavior. It will give him welcome mental stimulation, to say nothing of the exercise you both will enjoy. He can also practice his social skills.

Early training is a must-do commitment to owning a Dogue-Brasileiro. Many dogs of his kind get a bad rap because of lax ownership. Don’t be that guy. Take an active role from day one. This pup does best with positive reinforcement. His intelligence also demands consistent lessons. While he is sometimes independent, he’ll respond well if you establish a routine and give him a reason to obey.

The good news is that the Dogue-Brasileiro is easy to groom. Regular brushing with a curry brush will get the job done. The bad news is that he sheds year-round. Keeping up with the grooming will make it manageable. We recommend handling his paws frequently so that trimming his toenails is doable. The same thing applies to checking his ears.

The primary health issues of the Dogue-Brasileiro are shared with other large breeds. A responsible seller will screen for them to prevent them from passing on to the next generation. Make sure to ask for proof of an Orthopedic Foundation for Animals (OFA) examination for the recommended tests. It’s imperative, considering the relatively short lifespan of this pup.

One of the traits of the Fila Brasileiro is marked differences between the sexes. The Federation Cynologique Internationale (FCI) guidelines describe them as “feminine females, masculine males.” That can help you decide whether you’d prefer a male or female. The sizes of the two vary widely, too. We recommend that you discuss spaying or neutering your pet with your vet.

Larger breeds don’t reach sexual maturity until they are almost two years old. Bear in mind that altered pets are at an increased risk of obesity. Their metabolism will slow down, meaning less food to keep them in shape. Unfortunately, the Fila already has a propensity to gain weight. Therefore, monitor your Dogue-Brasileiro’s diet to ensure he stays fit.

The Dogue-Brasileiro is a pet for individuals who understand the challenges of owning a dog of this temperament and strength. If you’re looking for a watchdog, this pup is up to the task. He’ll reward you with a fierce loyalty to protect you and your family. However, he is a commitment in both time and money. He must have a strong leader who will guide his training and socialization skills.