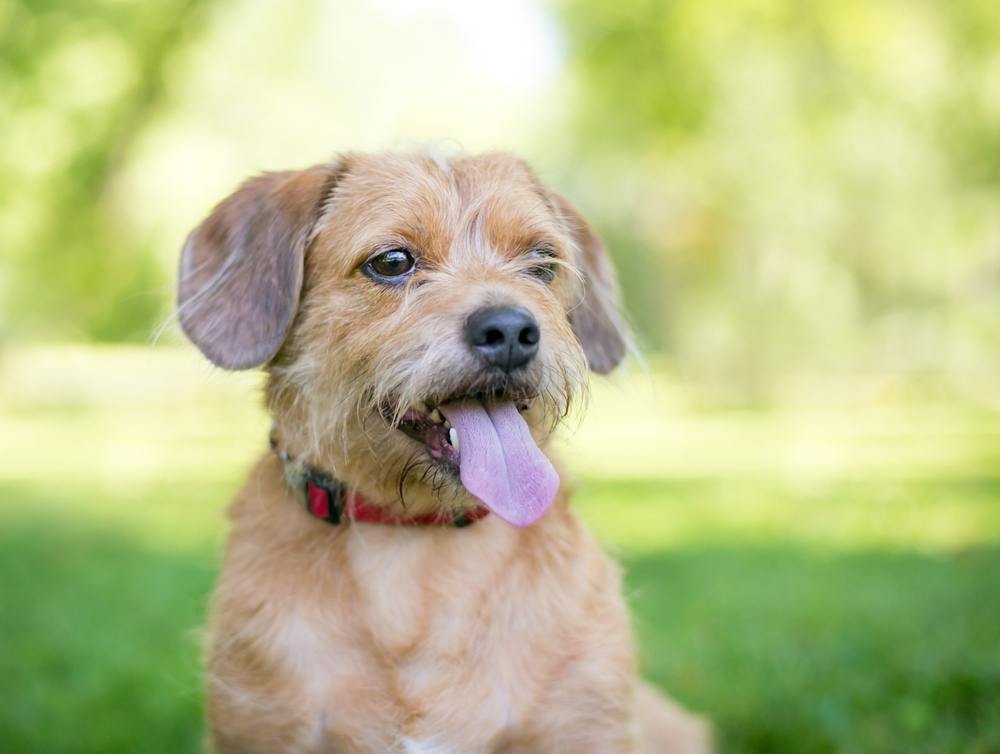 Does the thought of a small, but confident dog appeal to you? Would you be pleased as punch to have a pup that loves meeting people, and makes friends easily?

If so, take a gander at the Doxie Cairn. These cheerful little chaps are a crossbreed of the Cairn Terrier and Dachshund and make wonderful companions for both city and rural living!

Though a recent hybrid in the scheme of dog breeding, let’s look at the history of the two parent breeds to get a better idea of the heritage of the Doxie Cairn.

The Cairn Terrier was originally a working terrier from the Land of Skye that roamed the rock and cliffs of Scotland bolting, foxes, otters, and other vermin. Before breeders separated out different lines, the breed was grouped with other Scottish terriers. The Cairn Terrier was recognized as a distinct breed in 1912.

The Dachshund may go as far back as the 16th century. The common theory is that they are a relative of the Basset Hound and were probably crossed with terriers. They were initially developed to hunt badgers, and today they are bred as hunting dogs and companions.

Doxie Cairn Puppies – Before You Get One…

Doxie Cairns start out as rambunctious puppies and grow into self-assured, sweet little dogs. They will flourish with room to explore outdoors and constant attention from their owners.

Doxie Cairns become extremely attached to their families and pine for you when separated. Once you have won the heart of a Doxie Cairn, you will have an affectionate and upbeat friend for the rest of their life!

And the Doxie Cairn can live quite a long time. These dogs often make it to 15, and some to nearly 20! Taking care of a Doxie Cairn is a long-term commitment.

1. A Dachshund Was the First Olympic Mascot

The Dachshund breed is popular and well-loved in Germany, and so it is no wonder that the first-ever Olympic mascot was one of these charming wiener dogs. Waldi the Dachshund was created for the 1972 Munich Olympic games and has been used as a mascot for the event ever since.

2. The Cairn Terrier is the Official State Dog of Kansas

Though they originated in Scotland, the Cairn Terrier has been adopted as the official state dog of Kansas. And the reason for this is because of one Cairn Terrier thespian.

The celebrity dog that won the hearts of Kansas citizens was Terry, a female Cairn Terrier who played Toto in the Wizard of Oz in 1939. She went on to act in 15 more films. The breed was declared the Kansas state dog in 2012.

3. A Doxie Cairn Will Love Having Their Own Backyard

Both parent breeds for the Doxie Cairn are inquisitive little dogs bred to hunt a variety of different small animals. And this spunky hybrid breed exhibits the same joy for exploration!

To keep this bright pup happily active, and let them indulge in their roaming instinct, it is best to give the Doxie Cairn frequent access to a fenced-in yard. They will relish the chance to explore on their own sometimes just as much as they enjoy playing with their family.

Temperament & Intelligence of the Doxie Cairn 🧠

An energetic mix of hound and terrier, the Doxie Cairn is a bold and confident dog when at work and an attention-loving charmer in the home. They love people, and their playful, sweet nature makes them an excellent companion for families with children.

These pups will love going out with their owners and meeting new people, and their outgoing personalities will win them many friends. Without some socialization, they can become overly excited and bark excessively, but they are almost never aggressive with strangers.

Their small size makes them highly adaptable in terms of living situations. They are brave enough to enjoy rural or suburban homes, and small enough to fit into city life and apartments.

A focused, keen intelligence has been bred into the Doxie Cairn for hunting purposes, so you’ll want to be able to give this little dog plenty of exercise and affection.

Good-natured and playful, this breed can be a wonderful family dog. As far as the Doxie Cairn is concerned, the more people to shower them with affection and play tug-of-war with, the better!

As always, early socialization of both dogs and kids is the best route to a harmonious household. The slightly independent Doxie Cairn does not tolerate rough handling and may nip children who are too young or unschooled to know better.

Small but confident, the Doxie Cairn is incredibly outgoing and social with other dogs. It’s still a good idea to socialize your dog with others as a puppy, but it should go smoothly. Socialization and supervision are recommended with cats, and can lead to perfectly amicable relationships.

One thing to keep in mind, however, is that the Doxie Cairn inherits quite a bit of hunting instinct from both parents. Though sweet, this dog is hardwired to treat small animals like rabbits and rats as prey. Save yourself the stress, and don’t introduce your prey animal pets to your Doxie Cairn.

Things to Know When Owning a Doxie Cairn

Still need a little more information before you decide? Then check out this section of day-to-day upkeep for a Doxie Cairn.

Making your own dog food can be time-consuming and challenging to balance all the nutrients that your pup needs. So, for nutritional value and convenience, you can’t beat a high-quality dry kibble or canned dog food.

We recommend choosing a dog food that has lots of whole food ingredients: lean proteins, greens, and fruits and veggies. Steer clear of brands that talk big on the bag about wolves and nature, but have ingredient lists full of the cheapest grains (wheat, corn) and by-product ingredients.

Your veterinarian will be able to tell you more about appropriate portion sizes, foods you can give your pup as treats, and may have recommendations for trusted brands of dog food to try.

The Doxie Cairn is a compact and athletic little dog. They won’t need quite as much exercise as some of their larger counterparts, but you should walk your furry friend for at least an hour every day.

And, as long as you allow them plenty of exercise, their size makes them great for almost any living situation. Even apartment dwellers with a dog park or hiking trails nearby will easily be able to accommodate for a Doxie Cairn’s activity requirement.

Energetic and inquisitive, though the Doxie Cairn does not need a lot of space, they will love having a yard to explore. Their keen minds will benefit greatly from a little solo, off-leash time outdoors, and with a fence you won’t have to worry about them roaming.

The Doxie Cairn is an apt pupil to teach basic obedience commands and tricks. Training with this willing pup should go smoothly and easily.

Just like with any dog, you can build a stronger relationship just by spending time learning to communicate with this breed. An eager-to-please dog, the Doxie Cairn will see training as another fun activity to do with their owner, and it can be enriching for both human and canine!

Depending on which parent your Doxie Cairn favors, your dog may have a single or double coat. Those with fur like the Cairn Terrier will have a wiry, weather-resistant coat. Or, you may see shorter, smoother fur like the Dachshund.

In either case, the Doxie Cairn is a moderate shedder at most, and only sheds heavily once or twice a year. You can keep their coat in tip-top shape by brushing them once a week or so, and bathing occasionally.

And lastly, toenails! Doxie Cairns are energetic little fellows and may wear their nails down while romping about, but you should still check them routinely and trim when needed. A timely nail trimming will save your pup from cracked nails and keep them from nicking themselves by accident.

Though purebred dogs can inherit a number of conditions, hybrid dogs like the Doxie Cairn are significantly healthier.

Even so, there are still a number of health concerns to watch out for when caring for a Doxie Cairn.

Most personality traits are unique, and dependent entirely on the dog themselves rather than sex.

You can, however, count on females being smaller and a bit more docile. Males may be more likely to exhibit sexually aggressive behaviors (e.g. mounting, humping, marking their territory with urine) and are a tad larger than females.

So, is the Doxie Cairn right for you?

Those with schedules that keep them away from home for long periods of time or that have sedentary lifestyles may want to search out other breeds.

But if you are interested in a cheerful canine companion to jaunt about town with or explore outdoors, this energetic and inseparable hybrid may be the perfect fit!