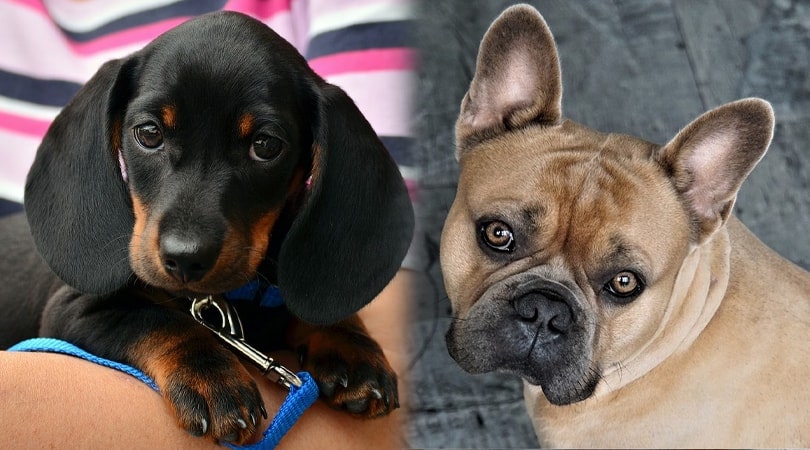 The French Bulldog Dachshund is a mix between the loveable French Bulldog and that short-and-stout Dachshund. Because this is a mixed breed, its traits can vary quite widely. They can weigh anywhere between 15-25 pounds, which is quite a broad range for such a little canine.

Typically, they are short – just like their parents. Furthermore, they are known for being fun-loving and very people-oriented. They love life and usually have a very sunny disposition. While they are loyal to their family, they are also usually very friendly towards strangers as well.

While these canines can be excellent companion dogs, that doesn’t necessarily make them fitting for every owner. In this article, we’ll discuss everything you need to know about this friendly breed and help you figure out if this is the right dog for you.

Because this dog is a mixed breed, you never really know how a particular puppy will act. This is because the puppy can inherit any gene from either parent. They may act more like a French Bulldog or more like a Dachshund. You never know what sort of mix you are going to get. They are not nearly as “set-in-stone” as purebred dogs.

In most cases, this mixed breed is a pretty even mix of both parents. They are not active, though they do need a bit of exercise. They are eager to please, which can make training easy. However, they are not the smartest dogs out there, so it takes them a little to learn new commands. They may or may not have a strong prey-drive. This may make them unsuitable for homes with other animals.

This is not a very popular mixed breed in the least. They are usually not considered “designer dogs.” In other words, they are typically not bred on purpose. Most dogs are of this breed are happy accidents. You are more likely to find one at a shelter or rescue than being sold by a breeder.

Most shelters have an adoption cost of anywhere between $50 to $300. If the dog is not fixed, their adoption cost will usually be higher as the shelter will need to pay to get them fixed. Depending on the shots and other veterinary work the dog needs, the price may be higher.

If you manage to find a breeder specializing in this mixed breed, you can expect to pay anywhere between $500 to $1000. Because these dogs are smaller, they are usually less expensive to breed than other breeds. This contributes to their somewhat low price.

2. French Bulldog Dachshunds are prone to a variety of health problems.

3. This breed is somewhat rare, as there are very few breeders that specialize in them.

In most cases, this breed is amiable. Early socialization helps ensure this dog is friendly with strangers and a variety of people. However, this dog is usually accepting of others as the default. Of course, each canine is unique, so that some dogs may be more friendly than others. Their genetics do matter somewhat. However, both parent breeds are friendly, so there is no reason to think that their puppies wouldn’t be.

Many owners describe this breed as cheerful and fun-loving. They are usually delighted and don’t get into much trouble. They can be a bit too excited for their good sometimes, however. They do tend to jump on people and knock over children when excited. Early socialization can help with this, but this seems to be in the territory of the breed.

At the same time, these dogs can be a bit independent and stubborn. They love their people and sometimes listen to what you tell them to do. Furthermore, it takes them a bit longer to catch onto new tricks since they aren’t the smartest dogs.

They can be. They are very friendly and typically do not mind children at all. They love all their family members so that they will bond well with children. However, with that said, they can be a bit too energetic for some smaller children. They are also large enough to knock children over in some cases, which they can do when they get excited.

Early socialization is essential to ensure that their excitement isn’t too overwhelming.

Do French Bulldog Dachshunds Get Along with Other Pets?

Yes. They are usually not particularly aggressive towards other dogs, though they aren’t necessarily friendly either. Early socialization is vital to ensure that these pets will get along with others. They usually don’t have too strong of a prey drive, so they can live in a home with cats and other small animals, assuming they were introduced to them at a young age.

Things to Know When Owning a French Bulldog Dachshund

We recommend choosing high-protein food. But you don’t need to do more than that.

These dogs are very energetic. They tend to get excited very quickly, especially when people are involved. Exercise can help curb some of this excitement, but it will not go away completely. These dogs are one of the most energetic – at least where their excitement is concerned.

With that said, these canines don’t need too much exercise. They are typically okay with a brisk walk around the block twice a day. Playtime in the backyard is also a good option, as these dogs are very playful in most cases. Puppies may need a bit more exercise; they usually have more energy.

While these dogs typically love making their owner happy, they are not the easiest dog in the world to train. It takes them a little bit to figure out new commands (or even remember old commands) in many cases. They are not the smartest dogs in the world, but this doesn’t mean they aren’t perfect in their very own right!

They can also be a little bit stubborn in some circumstances. The “teen” stage is where most of the stubbornness sprouts up. Aim to be very patient during this time. Early training is essential. We highly recommend puppy classes to combine training and socialization.

This canine does not have high grooming needs in the least. They typically have short hair and only shed moderate amounts. A quick brushing session a few times a week is usually all you need to keep the shedding to a minimum. They may need a bath occasionally, but they usually do an excellent job of keeping themselves clean.

However, they do not have a double coat, so that they may need a bath occasionally.

While these dogs are a mixed breed, they are not incredibly healthy. They can be prone to a lot of different diseases and disorders, thanks to their parents.

There is not a significant difference between different genders of this breed. They are all about the same size and have a similar temperament. Gender should not have a significant impact on your decision-making process for this reason.

While some breeds have same-sex aggression, this is not necessarily the case for this breed, though. You can safely have them around dogs of the same gender.

The French Bulldog Dachshund is a friendly, people-oriented dog. They are relatively low-maintenance. They don’t require much grooming and need only moderate exercise. They’re a good option for pet owners who want a somewhat easy companion dog.

While they can be trained, it takes a lot of patience when compared to other dogs. Start early and train often. These dogs can forget commands easily, so it is essential to re-visit past commands often.