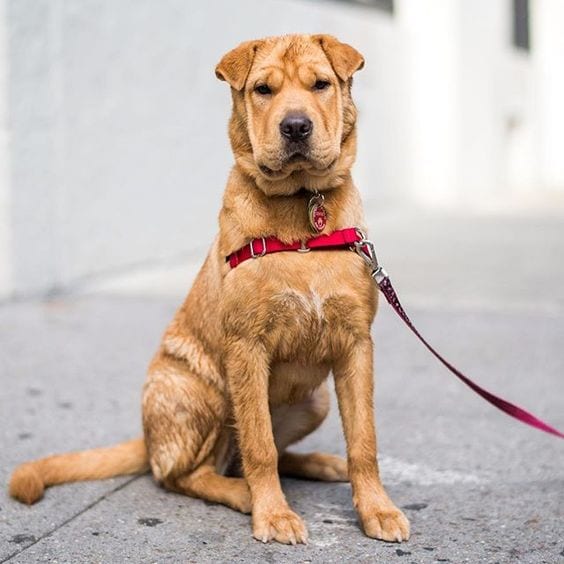 The Golden Pei is a hybrid mix of the Golden Retriever and Chinese Shar-Pei. This mix of breeds can lead to many different potential options as to the dog’s temperament and personality.

Golden Peis can grow to be a large dog but may also only be medium-sized, depending on the size of the parents. If the dog inherits more genetics from its Shar-Pei heritage, they will need a lot of work in training to behave well around other people and pets.

Golden Peis that favor the Golden Retriever side are more laidback, devoted, and loving dogs. Either way, the dog is beautiful, with potential coat colors of deep cream, white, golden red, and sometimes even black or brown.

Golden Pei Puppies — Before You Get One

3 Little-Known Facts About the Golden Pei

1.  Shar-Peis have a blue-black tongue.

The Shar-Pei inherited the trait for an oddly colored blue-black tongue. Many believe that this means it is a descendant of the Chow from the Han Dynasty because of this.

In America, the American Kennel Club has set standards stating that an adult Shar-Pei with a pink tongue that is only spotted is a significant fault. If it has an entirely pink tongue, this disqualifies it from even being recognized as a Shar-Pei by the prestigious club.

Don’t panic if you have a young Shar-Pei puppy with a completely pink tongue. The pups are born with pink tongues, and they darken while they age. By the time they reach 2 ½ months old, the tongue should be completely black.

2.  The Golden Pei is never an aggressive breed.

The Shar-Pei gets a bad rap for being an aggressive breed because it was used as a fighting dog in ancient China.

This belief is a myth when it comes to the modern dogs, especially those crossed with the relaxed Golden Retriever.

Even if your Golden Pei inherits more genes from the Shar-Pei parent, you don’t have to worry about aggression. These dogs might be wary of strangers and new animals, but they don’t have any in-bred tendencies toward attacking or any aggression. They are more likely to leave the situation instead of aggressively approach it.

3.  The breed is part Victorian elegance and part Chinese fighter.

In the modern age of globalization, it is always interesting to see the crossbred nature of new hybrids between dogs who never would have previously encountered each other.

With the Golden Pei, the cross is between a Golden Retriever, initially bred in Scotland, and the Shar-Pei, who was a part of ancient Chinese culture.

The Golden Retriever was bred as a waterfowl dog, becoming even more critical upon the invention of guns during the Victorian Era. They have a gentle yet powerful mouth, meant to retrieve waterfowl effectively.

The Shar-Pei is thought to be an ancient dog breed used in the Han Dynasty as a guardian, hunter, and a herder. They get their aggressive reputation from their fighting past, although it is long behind them.

These dogs were almost entirely wiped out at one point, before a businessman from Hong Kong, Matgo Law, stepped in to help save the breed. They were brought to America and the entire line was renewed.

Temperament & Intelligence of the Golden Pei 🧠

The Golden-Pei will often inherit more of the Retriever personality, being a gentle dog with a good nature. They care for their owners with affectionate intelligence that quickly incorporates them into any living situation.

Although they are not aggressive, they can have strong wills and in a few cases, can even be considered stubborn. They need direct, patient trainers who are consistent in the frequency of sessions and commands.

Golden Peis are not a highly energetic dog breed, although they are still full of life and need the appropriate amount of physical activity. Preferably, their physical output should be paired with mental challenges to stimulate them in body and mind.

These dogs are quite social with people and animals they trust. They are snugglers and love being around their family. Bonding time is important with this breed to keep them emotionally healthy.

The Golden Pei is a quality dog to consider for families without kids or with older children who can fully grasp their needs and potential provocations. They won’t act out against kids, but they do have a shorter fuse than other similarly-sized dogs.

They are protective of their family members and can make good watchdogs if needed. Golden Peis are adaptable dogs, especially from a young age, and will do what they can do quickly make their adopted family their own.

Due to the excellent nature of the dog as a whole, they normally do well around other pets. They might not accept them immediately, but this manifests in avoidance more than it does in any sort of aggression.

The best thing to do for your Golden Pei is to socialize it frequently and as early as possible. Make socialization a part of training sessions so the pup can quickly learn appropriate reactions around new people and animals.

Things to Know When Owning a Golden Pei

Since the Golden Pei is typically a medium-sized dog, it needs an average amount of food. Feeding the dog about 3 cups a day is enough to fuel its daily activity and health requirements.

Don’t feed the pup all of its daily food in one meal, however. They are prone to binge-eating and can gain unhealthy amounts of weight or feel sick afterward. Instead, feed them several smaller-sized portions throughout the day to suit your schedule.

The Golden Peis can be a wide range of sizes, so it is best to speak with your vet about the exact amount recommended to keep your dog healthy and happy for as long as possible.

Golden Peis are not particularly high-energy dogs. They need about 75 minutes of consistent activity during the day, walking, or running about 11 miles a week to stay healthy.

Be careful of overexertion during hot seasons of the year. The dog doesn’t regulate its body temperature well in heat and should be exercised in the coolest part of hot days.

Just as they are adaptable to the kind of family they live with, the pups are always adaptable to the living space they find themselves in. Therefore, they can live in apartments if they can get enough exercise during the day.

The earlier that training can begin with these dogs, the better that they will behave as they grow older. They can be strong-willed, so patience is required when trying to work through something that they don’t particularly want to do.

Since this breed is quite intelligent, they respond quickly to new commands and with consistent training, will have them down pat in no time. They love a challenge, so giving them games or doggy puzzles is an excellent way to engage them.

The amount and type of grooming that these dogs require depend on which kind of coat their genetics favor. A Shar-Pei has short, stiff fur that does not require much maintenance. A Golden Retriever, on the other hand, is renowned for their beautiful long-haired coat of golden or red colors.

Typically, these dogs need to be brushed once a day to prevent tangles in their coat and remove dead hairs that will be shed. Use items like a pin brush, a slicker brush, and a de-shedder to get the job done efficiently.

The dogs might inherit dental issues if not correctly cared for, so brush their teeth at least once a week, preferably twice. Check its nails semi-frequently to make sure they don’t grow out too long.

Hybrid dogs are always susceptible to diseases common in either of the parental lines. It is a best practice to check with the breeder you are using to verify the parents’ health certificates and histories.

There is no noticeable difference between the personalities of males or females of this breed. The males tend to be slightly larger than the females, topping out at 75 pounds. The females can weigh up to 60 pounds.

The Golden Pei is a vibrant mix of two different breeds from across continents. They are a surprisingly adaptable dog, ready to take on and love any family. They can live on vast expanses of land or be happy in an apartment if they can exercise outside.

The dog might not be the first pick for families with young children. They otherwise make great additions to older families, singles, or seniors because they only have an average amount of energy.

They make a reliable companion for snuggles or running trips and will protect you and your family from harm.