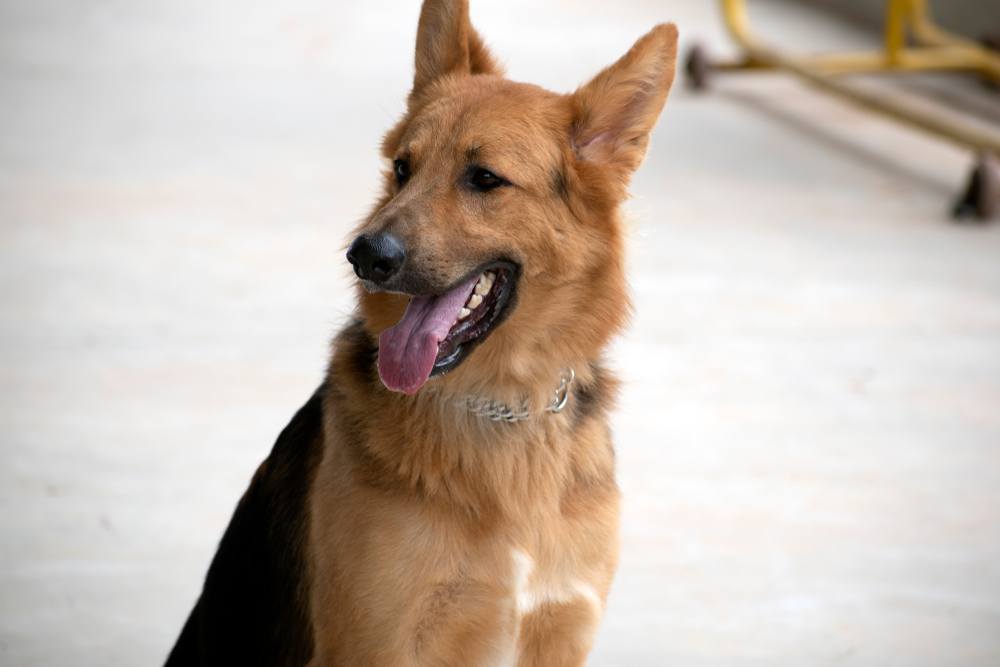 If you’ve been imagining a dog breed that combines two of the best-loved breeds possible, you might just have met your dream dog in the Golden Shepherd. Blending the friendliness and intelligence of the Golden Retriever with the courage and confidence of the German Shepherd Dog is, in our opinion, a masterstroke.

While this hybrid breed ticks many boxes, that doesn’t mean a Golden Shepherd puppy is going to be the perfect companion for everyone. Their combination of intelligence and energy means you’re going to need plenty of time to set aside for keeping your new companion well occupied.

Golden Shepherds are not as well-known as some other mixed breeds. As a result, you might not know much about them. That’s where we come in! To find out everything you need to know about this charismatic mix of two well-loved breeds, keep reading.

Golden Shepherd Puppies — Before You Get One

When you first set eyes on a pile of wriggly Golden Shepherd puppies, you might find it extremely difficult to avoid coming home without one or even two in your pockets! But remember that these puppies are going to grow into dogs that require a great deal of attention from their dedicated owners.

The combination of intelligence and energy from the parent breeds means some of us just aren’t able to keep up with the needs of this breed! Golden Shepherds need serious mental and physical stimulation every day without fail. When they get bored, which can happen quickly, they might turn their thoughts to destructive behavior.

So, make sure you know that you’re fully capable of meeting the needs of a Golden Shepherd puppy before you sign on the dotted line. Here’s more information to help you make up your mind.

With German Shepherd Dogs currently taking second place in the breed popularity rankings in the U.S. and the Golden Retriever following in the third place, it makes perfect sense to combine these to iconic breeds.

The International Designer Canine Registry first recognized this hybrid in 2009. Golden Shepherd puppies can also be registered with the Designer Breed Registry.

2. Golden Shepherds love to look after their families

The devoted nature of the Golden Retriever combined with the protectiveness of the German Shepherd Dog means their offspring almost always inherits a fierce desire to protect and look after their families. It’s impossible to know whether your puppy will inherit the tendency to guard from their German Shepherd Dog parent, the gentle devotion of the Golden Retriever, or a combination of both!

Given their Retriever heritage, it’s hardly surprising that Golden Shepherds are known as a “mouthy” breed. They’re going to be at their most content when they’ve got something to carry around with them or are playing a retrieving game with their owners. It’s a good idea to provide a range of tough toys for your Golden Shepherd to play with and carry around. Otherwise, they might be tempted to make off with your slippers instead!

Temperament & Intelligence of the Golden Shepherd 🧠

If you decide to go ahead and bring a Golden Shepherd into your family, there might come a day when you have to consider the fact that your dog might be cleverer than you are! While their brains are one of the first things you’ll notice about this breed, their temperament is just as special.

Golden Shepherds will bond strongly with their families. Early socialization and training are essential to ensure that this bond doesn’t run over into over-protectiveness. You’ll find that your Golden Shepherd might develop the habit of quietly checking up on all members of the family, wherever they might be in the house.

While they’re happy to relax and take a nap for a while, their energy levels do mean that sooner rather than later, they’re going to be ready for more action. You just have to make sure you’ve got energy levels to match!

Golden Shepherds love being around their families, so they won’t enjoy being left home alone for long periods. A better idea is to make arrangements with a pet sitter to look after your dog, rather than leave them bored at home, where they might start experimenting with destructive behavior while you’re gone!

Golden Shepherds make great family dogs, as long as you’re prepared to put the hard work into their training and socialization while they’re still puppies.

Because they tend to both guard and strongly bond with their owners, they can become a little over-enthusiastic if you don’t take care to socialize them while they’re still a puppy. Taking them to meet other dogs and people, as well as having friends visit your house, will help your puppy develop into a well-mannered adult dog who doesn’t feel the need to defend their territory.

You might need the whole family to make sure these energetic dogs get enough exercise too!

Again, the answer to this is a firm yes, but only as long as your Golden Shepherd has been socialized well from a young age. If so, there’s no reason they can’t get along well with other pets. Just be sure to keep the initial introductions short, and make sure you carry them out in a controlled environment.

Things to Know When Owning a Golden Shepherd:

Taking on the responsibility of becoming the proud new owner of a Golden Shepherd isn’t a decision you should make lightly. While they’re certainly an appealing mixed breed, they will still require plenty of attention from their owner to thrive. Here are a few things to consider before you make your choice.

A high-quality dog food appropriate to the age of your Golden Shepherd will help make sure your puppy receives all the nutrition they need from a young age. It’s a good idea to speak to the breeder of your puppy and find out what food they have been using. If you can, try and obtain the same brand to minimize any chance of an upset tummy when you bring them home. Once your puppy has settled into their new surroundings, you can gradually change their diet to the brand of your choice if you prefer.

Some Golden Retrievers do tend to put on weight easily, so you might find that your Golden Shepherd inherits this trait. If so, make sure you only feed them the recommended daily amount of their food, cut down on any treats, and increase their exercise if you can.

While it can sometimes be hard to predict the exact characteristics of a hybrid puppy, one thing we can be sure of is that your Golden Shepherd is going to require plenty of exercises every day.  A Golden Shepherd who hasn’t had enough exercise will become quickly bored and frustrated. Unfortunately, at this point, their intelligent brain starts looking for other activities to do to amuse themselves. Chewing the remote, raiding the trash can, or ripping apart their bed are a few examples of how your Golden Shepherd might decide to amuse themselves if you forget their walk. Don’t say that you haven’t been warned!

Golden Shepherds will also love joining in any outdoor activities. But before you start high-impact activities, such as running or cycling, with your dog, it’s a good idea to schedule a checkup with your veterinarian so they can give your puppy the all-clear for these kinds of activities.

Golden Shepherds excel at activities such as obedience trials, agility, and tracking. These are excellent ways to stretch your dog’s mental and physical boundaries.

Golden Retrievers and German Shepherd Dogs are both incredibly eager to please, which makes them a joy to train. They’re also incredibly smart, so sometimes it can be a struggle to keep up with them! Your puppy is likely to inherit these traits, so puppy training classes are essential if you want to make sure your new puppy grows into a well-mannered and obedient adult.

Some German Shepherd Dogs do tend to become extremely strongly bonded to their owners, with the possibility that they decide to start guarding you against both other dogs and people. This can become problematic, so it’s important to socialize your young Golden Shepherd puppy to ensure that they understand this isn’t a necessary behavior.

Both Golden Retrievers and German Shepherd Dogs have waterproof double coats, so your Golden Shepherd puppy will most likely end up with a similar coat type. Depending on the parent, your pup could end up with a long or short-haired coat.

Either way, they’ll require a significant amount of grooming to keep their coats looking shiny and tangle-free. Your Golden Shepherd will likely shed twice a year, at which point, you’ll find yourself surrounded by fluff! Daily brushing sessions using a shedding comb or a brush that’s designed to help strip out the undercoat will be a helpful tool.

Your Golden Shepherd will require their nails trimmed every month or so. At the same time, it’s a good idea to get into the habit of checking their ears and teeth.

Luckily, mixed breed or hybrid dogs such as the Golden Shepherd are widely agreed to be more healthy than their purebred chums. It’s still a good idea to familiarize yourself with the health conditions that they may suffer from. As this breed doesn’t have a long history, we can find out more about the illnesses they may suffer from by taking a look at both the parent breeds. While this list might seem long, bear in mind that it includes conditions that both parent breeds may suffer from, which may never get passed onto your puppy.

If you’ve made up your mind that the Golden Shepherd is the perfect dog for you and your family, you might now have turned to discussing whether to go for a male or female puppy.

First of all, it’s important to remember that each puppy is an individual, with personality traits that may have no bearing on if they’re a girl or a boy. We would always recommend choosing your puppy based on their personality first.

Male Golden Shepherds tend to be heavier and larger than females, but apart from that, they’ll be similar. Many hormonal issues can be eliminated when you spay or neuter your puppy as well.

Now you know more about this characterful breed, we hope you can see how they can make the perfect pet for active households looking for a dog who’s just a little bit different. They’re intelligent, friendly, and engaging, which means every member of the family will look forward to spending time with them.

Just make sure that you can all commit to making sure your Golden Shepherd gets enough exercise of both the mental and physical varieties. Whether that’s long hikes, obedience classes, or a swim at the beach, your Golden Shepherd will take all the activity you can throw at them and still be ready for more.

If you can meet the needs of this active and loyal pup, then you’ll have a friend for life.

Can Dogs Eat Corn on the Cob? What You Need To Know!