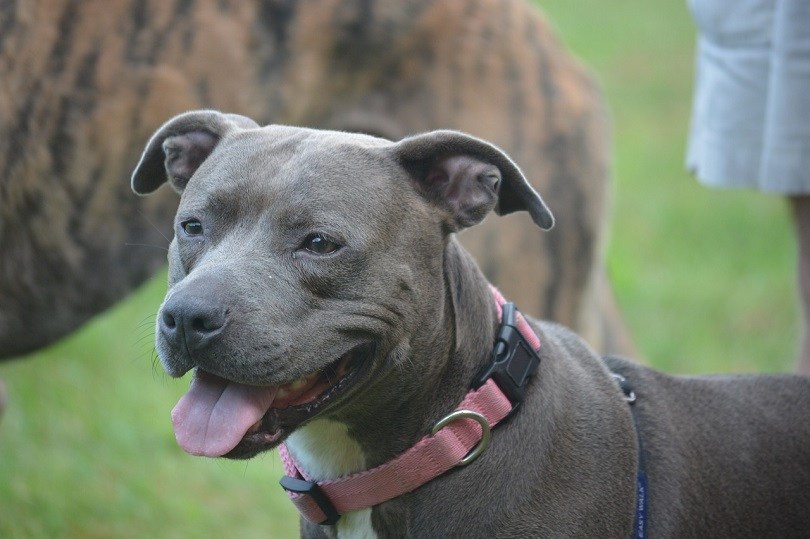 The Great Danebull is the offspring of two very popular breeds — the American Pit Bull Terrier and the Great Dane. Though these are two drastically different breeds to begin with, when combined, they make beautiful puppies that are excellent pets.

These are very sizable dogs, taking cues from the Great Dane side of the family. But the Pit Bull in them means that they’re smaller than purebred Great Danes. They come in a variety of colors and patterns, often having coats that resemble a Pit Bull.

Great Danes tend to be more low-key dogs that aren’t particularly energetic or active, though the Pit Bull in a Great Danebull increases their activity needs somewhat. Still, they don’t need as much exercise as other large dogs.

Loving and affectionate, these dogs are about as friendly as a dog can be. Almost too friendly! They’ll get along with just about everyone, especially if you start socializing them early. Their affection endears many to them while their goofy personalities make them fun and entertaining.

Great Danebull Puppies – Before You Get One…

Based on looks alone, the Great Danebull has a rather intimidating presence. With a large stature and a face that’s similar to a Pit Bull’s, this breed can instill fear in intruders with just its appearance.

But sometimes, appearances can be deceiving!

Though they may look scary, these gentle giants are actually incredibly loving creatures. They’re very friendly with just about everyone and they’re not prone to aggression. They make great pets, developing a very close bond with their person.

That said, this breed can still make a good guard dog. Though they won’t be aggressive towards guests, if an unexpected intruder appears, a Great Danebull will be vocal about their displeasure, alerting you and the would-be intruder of the potential danger.

2. Most Rental Properties Won’t Accept Them

At least in America, this breed is likely to be turned down at almost all rental properties. Both parents are included on the “dangerous breeds” list that landlords use to determine what pets are eligible for residency.

Of course, as anyone who has ever owned either breed can attest, they’re incredibly loving and safe dogs.

Regardless, because of appearances and liabilities, you can expect to have a difficult time finding a place to rent if you have a Great Danebull in tow.

Great Danebulls are an incredibly affectionate breed that closely bonds with their family. They have a deep-seated need to please their people, and they need lots of affection and attention so they feel that they’re an important part of the family.

Because of their emotional attachment to their owner, Great Danebulls are prone to separation anxiety. They don’t want to be alone all day, instead, preferring to be by your side at all times. Because of this, these pets are best suited for families that have ample time to devote to their dog.

Temperament & Intelligence of the Great Danebull 🧠

Few breeds of dog are more loyal and loving than the Great Danebull. This giant teddy bear of a breed is as affectionate as they come.

More than just affectionate though, these dogs are also highly intelligent. They can be easily trained to learn new commands and tricks, which is made even easier by their deep need to please.

Truthfully, few breeds make better family dogs than the Great Danebull! These giant sweethearts are incredible with children. They seem to subconsciously understand that they need to be gentle protectors and they fill that role perfectly.

If you’re planning to get a Great Danebull as a guard dog, then you should know that they’re extremely friendly with everyone. They’ll get along with any of your guests and generally don’t show any signs of aggression. But if they feel there’s a threat, the inner protector will come out and they’ll make their displeasure known.

Since they’re such a friendly breed in general, Great Danebulls tend to do very well with other pets. Though they are a large dog, they don’t have a strong prey drive, so they get along well with smaller animals. They’ve even been known to do fine with cats. Just make sure to socialize your Great Danebull early and it should get along with pretty much everyone!

Things to Know When Owning a Great Danebull:

Great Danebulls are very large dogs that can be as tall as 28 inches and weigh nearly 100 pounds. Naturally, a dog that size is going to require a lot of food. You can reasonably expect to feed your Great Danebull about four cups of dry dog food each day.

Compared to other dogs, even other large dogs, that’s a lot of food. Don’t be surprised if you end up spending $60-$100 each month on dog food alone.

You might think that a dog of this size would need tons of exercise, but surprisingly, the Great Danebull doesn’t actually need much. About 30-40 minutes of activity each day should suffice. A short walk or a little structured playtime should do fine.

Aside from that, your Great Danebull will need a good bit of space to stretch its legs. Though they’re not super-energetic dogs, they’re still very large and need more room than what an apartment might provide.

Because they’re such intelligent dogs with a strong desire to please, Great Danebulls learn very quickly. They can pick up commands and even tricks with a little bit of positive reinforcement. In fact, these dogs respond incredibly well to obedience training, and it will even help strengthen the bond between pet and person.

This breed isn’t known to be a heavy shedder, but they do shed to some degree throughout the year. They won’t require much grooming in general, just an occasional light brushing should take care of the dead hair in their coat.

Aside from brushing, bathing needs for this breed are minimal. You shouldn’t need to clean them up more than once a month, though they’ll need regular teeth cleaning.

One of the advantages of mixed-breed dogs over purebred ones is that they may have a reduced risk of health concerns that are known to plague either parent breeds. However, they can still occasionally exhibit the same types of adverse health conditions, so it’s good to be aware of what those are.

Hip dysplasia is a disease that tends to affect large dogs, such as the Great Dane. It causes the hip to malform so it doesn’t fit properly in the socket. As the dog ages, this condition worsens, resulting in pain and loss of motion.

Giant though they are, Great Danebulls are one of the most affectionate and friendly dog breeds out there. They make incredible partners, bonding closely with their people. Because of their high levels of intelligence, these dogs are easy to train, and they have a deep desire to please.

Great with kids and pets alike, these dogs are perfect pets for families. But they don’t live as long as some other breeds because of their large size. Be aware that your four-legged friend probably won’t be around for more than about 12 years.

If you’re looking for a dog that can truly be man’s best friend, then the Great Danebull is certainly a breed worth checking out.