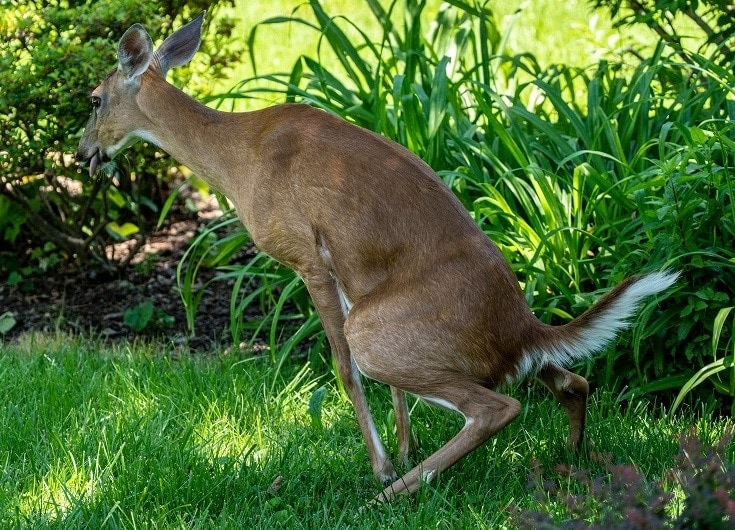 It’s pretty common for dogs to take a nice bite of deer poo when they come across it on a walk or in the garden. My own dog has done it, and I know she’s not alone! But how bad is it? Should you be worried?

Well, a quick internet search will do, right? Wrong. I thought I’d see what other answers out there and some were, quite frankly, ridiculous. There seems to be a lot of misinformation out there! It’s time to look at this from a scientific perspective.

Why Do Dogs Eat Deer Poop?

Eeew, right? Why on earth would they want to eat poop? Theories abound as to why dogs eat deer poop (scientifically named ‘interspecific coprophagia’). Whist many forum responses will have you believe that your dog must be missing key nutrients in his diet, the picture is a little more confused than that. For instance, whilst we know that dogs that are missing nutrients in their diet do engage in poop-eating, we also know that many normal dogs, with no discernible deficiencies, also eat poop. In fact, one study into coprophagia found no differences in gender, lifestyle, number of meals fed, or diet between coprophagic and non-coprophagic dogs.

Some people would have you believe that eating deer poop is a replacement for grass-eating in the winter. That doesn’t make sense to me- there’s still far more grass on the ground in winter than there is left in deer poop once they’ve digested it. There’s also a school of thought that poop-eating is a natural method of ‘cleaning up’, although this tends to apply more to dogs eating their own poop than eating the poop of deer and other species.

One survey found that dogs are more likely to be coprophagic if they are defined as ‘greedy’ by their owners. Another found that coprophagia is more likely in dogs that cohabit with other coprophagic dogs, suggesting it might be possible to ‘learn’ the behavior.

Is It Ok if My Dog Ate Deer Poop?

Lots of diseases, viruses, bacteria, and parasites are spread in poo. That’s why it’s so important that you pick up your dog’s poop! However, are there any diseases that can spread from deer to dogs by eating poop?

No. I couldn’t find any evidence that there are roundworm or tapeworm parasites that are a risk if your dog ate deer poop. That’s not to say that dogs can’t catch parasites from deer; the dog tapeworm, Dipylidium caninum, can be caught by dogs eating infected deer carcasses. However, no worms seem to pass from deer poop to dog.

Can Dogs Pick Up Bacteria From Eating Deer Poop?

Yes, deer poop can carry Salmonella and E.coli bacteria, amongst others. However, most dogs cope well with ingesting these bacteria and it’s unlikely that they’ll make your dog ill. If you have a very young dog, or an older dog with health problems, it’s possible that your dog will be affected by Salmonella or E.coli after eating deer poop, so you should keep a close eye on them, watching for severe stomach upset. In addition, even if your dog themselves isn’t affected they may be able to pass Salmonella or E.coli onto other people in the household, especially if those people are immunocompromised. If your dog is a poop eater, you should take care to wash your hands after touching or playing with the dog, and don’t let them lick faces!

Whilst there are lots of viruses that can spread from deer to other animals, I couldn’t see any that would pose a risk to a dog. Most viral diseases that can be passed in deer poop are of risk to other ruminants, such as livestock.

Can Dogs Get Giardia From Deer Poop?

Giardia is a microscopic parasite that affects all sorts of mammals, dogs, deer, and humans included. It spreads by accidentally eating particles passed in poop; either through contaminated water, directly eating poop, or through contact with it in the environment then licking the paws. However, there are different types of Giardia, and the type that affects humans doesn’t often affect dogs, and vice versa.

According to the Companion Animal Parasite Council, dogs are infected by types/assemblages A1, C, and D. Deer tend to have assemblage A or assemblage E. The deer assemblage A is the most likely to affect dogs, but it’s the type that affects humans- which means it doesn’t seem to affect dogs much. It’s therefore possible for dogs to catch Giardia from eating deer poop, assuming the poop is infected with the right sort of Giardia. In practice, healthy adult dogs are unlikely to catch severe Giardia from deer poop.

Can Dogs Get Nutrition From Deer Poop?

Regardless of whether they’re motivated by a deficiency or not, it’s possible that deer poop smells and tastes nice to dogs. After all, the digestive tract of a deer is very different to that of a dog. In deer, grass is fermented by bacteria- the deer then utilizes the by-products of this fermentation. Without a ‘normal’ stomach with a ‘normal’ digestive system, deer may miss some nutrition that dogs can access, and would thus encourage your dog to eat deer poop. It’s even possible that this poop smells attractive to them due to the by-products of fermentation.

What Should I Do if My Dog Ate Deer Poop?

If your dog does access deer poop, try to prevent him from eating any more. As long as your dog appears bright and well you do not have to contact your veterinarian. The most common side effect of deer poop eating in dogs is a slight upset tummy. Any vomiting and diarrhea should resolve after 24-48 hours. Don’t withhold food, but feed little and often, and be prepared to call your vet if your dog becomes lethargic, gets dehydrated, or can’t keep his food down.

How to Stop Dog From Eating Deer Poop

Stopping dogs from eating poop is notoriously difficult. Preventing access by fencing off your yard is the best way. You can also go out in the morning before your dog and remove any poop you find. Teaching your dog a strong ‘leave it’ command is also useful.

Can Dogs Eat Acorns? Are They Bad for Dogs?

Why Do Dogs Sometimes Eat Their Placenta? Is It Normal?