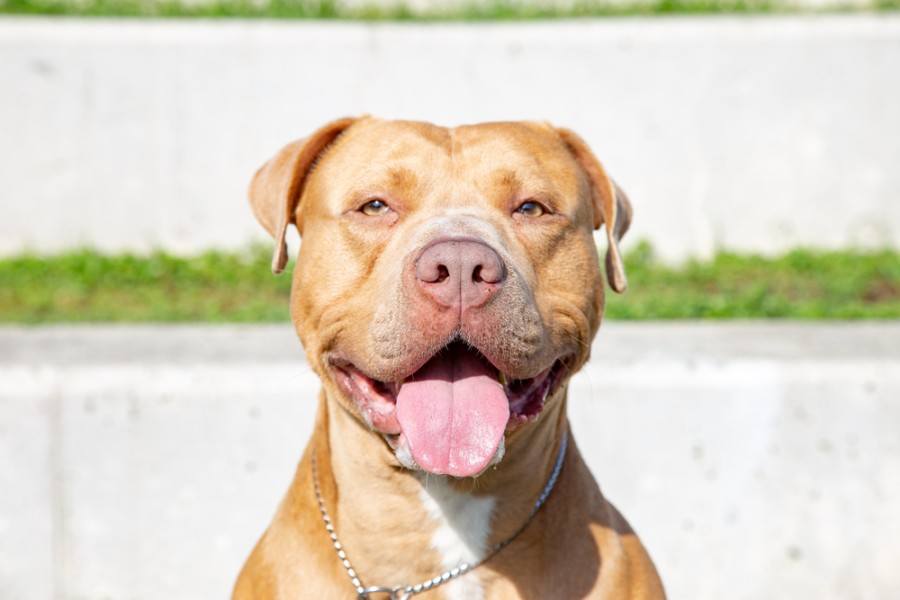 The Pit Bullmastiff is a formidable dog. He looks mean and has the goods to back up his threat. What else can you say about a canine of his size? The reality is that he is a brave pup, willing to take one for the team. He is a loyal pet that will go the extra yard to protect his family. This pooch is also a gentle giant who is surprisingly kid-friendly.

It’s a sad fact of life that the Pit Bullmastiff is not long-lived. That’s the case with any larger breed. It is a stark reality that you must consider when thinking about getting a dog like this one. Believe us when we say that it’s just as hard for adults as it is for children. Their shorter lifespan means that you must research potential sellers and their stock carefully.

The other thing you must understand upfront is that the Pit Bullmastiff has a higher annual maintenance cost than smaller dogs. He is a lot of dog that must have an owner who can rein him in and take an active role in training. Despite his size, he is an energetic pooch that needs plenty of exercise to stay happy and prevent boredom.

Pit Bullmastiff Puppies – Before You Get One…

The Pit Bullmastiff is a bit of an anomaly. The Bullmastiff is a recognized breed. The Pit Bull describes a type of canine that may have unclear origins among several dogs, including Bulldogs and the American Staffordshire Terrier. Unfortunately, the purpose for these pups was the same, regardless of the breeding stock. The long and short of it is that they were fighting dogs.

It’s not a stretch of the imagination to associate the Pit Bull with many undesirable traits for a pet. The Pit Bullmastiff is a cross with the American Bull Terrier, a breed recognized by the United Kennel Club (UKC). The confidence and fearless nature that you’d expect with a pup with this history is part of the UKC standard for his gait.

The Pit Bullmastiff needs an owner who can take charge of training and socialization early in the puppy’s life.  Everything else aside, a large dog like this one must have the guidance of an individual willing to take control from the start. This pooch is too strong not to have an equally an owner who understands this vital fact toward a successful relationship with this powerhouse.

1. The Bullmastiff combines the best of his parent breeds.

The name of the Bullmastiff tells you the whole story. He is a combination of the Bulldog and Mastiff. The latter gets the lion’s share of the mix at 60 percent.

The Bull Terrier entered the ranks of the AKC’s recognized breeds in 1885, just seven years after the first round of dogs. The Bullmastiff came much later in 1934. The Lakeland Terrier and Brittany Spaniel joined him that year.

3. The American Bull Terrier is a global icon.

Even if you’ve never met an American Bull Terrier in person, you know him first hand, i.e., if you’ve ever walked into a Target store. Bullseye hit the scene in 1999. The rest, as they say, is history.

Temperament & Intelligence of the Pit Bullmastiff 🧠

Dogfighting, thankfully, is illegal. For the PIt Bullmastiff, that means a gentler canine than his history might indicate. However, that doesn’t mean that this pooch isn’t a handful. He is, if just because of his size. He is a loyal pet that shares his affection freely with his family. After all, his background includes works as a guardian against poachers. He is a natural watchdog.

The Pit Bullmastiff is an excellent pet for families, despite its size. He enjoys the company of children. Your main concern on this front is that he might not know his own strength. We’d suggest teaching your kids to give this pooch his space and not to encourage roughhousing. Gentle play can take a turn not out of aggression but from his brawn, instead.

The Pit Bullmastiff isn’t the best choice for a family with other pets. He is not dog-friendly, given his past. He also has a moderate prey drive that won’t turn out well for smaller pets. Early socialization is imperative with this dog. Introduce him to other people and situations as a puppy to help curb any bad canine manners.

Things to Know When Owning a Pit Bullmastiff:

Even with his past, the Pit Bullmastiff is a sweet dog that can make an excellent pet. He needs an owner that can understand his needs and sensitivity. His size is also a challenge. Therefore, it’s vital for you to establish who is the boss early in his life to make him a better companion. While this pup is moderately adaptable, he is a big baby at heart and craves the attention of his tribe.

Normally, food accounts for about 20 percent of a pet owner’s expense for having a dog. The Pit Bullmastiff is an outlier on that score. He’ll go through chow much quicker than a smaller pooch. It’s essential to feed your pup a diet suited for giant breeds. These dogs mature slower and must have food that supports his growth rate.

The Pit Bullmastiff needs as much exercise to match his size—a lot! It’s an excellent way for him to burn off all his energy and the momentum it brings with it. We recommend taking an active role in it. Take him for daily walks to help with socialization and training. Remember that when a dog of his size pulls, you’ll notice it. Cultivate his leash manners as a puppy.

Luckily, the Pit Bullmastiff is relatively easy to train. He is agreeable and smart enough to make it less of a chore. He’ll do best with an experienced pet owner who can handle his strength. The Bull Terrier also brings some independence to the mix, which is another red flag. The earlier you start, the better. You must establish your role as soon as possible, especially since he can overpower a smaller person.

Another thing that the PIt Bullmastiff has going for him is how easy his coat is to maintain. While he sheds, he doesn’t need much more than a weekly brushing. Keep an eye on his nails and trim them as necessary. You should also check his ears occasionally. An occasional bath will keep him smelling clean. This pup will shed seasonally.

The Pit Bullmastiff is relatively healthy when it comes to minor issues that many dogs experience. The main concerns rest with his size and the congenital conditions the parent breeds may have. We strongly urge you not to buy a pet from a breeder who hasn’t done these recommended tests. Keep joint problems on your radar.

There is a broad range of sizes between the sexes of the Pit Bullmastiff. Consider the space you can provide with a giant breed. He needs room to run and exercise to stay healthy. The other concern is breeding. If that isn’t in your plans for your pet, we suggest discussing spaying or neutering your pet with your veterinarian. Otherwise, the personalities of the two are comparable.

The Pit Bullmastiff embodies the term, gentle giant. That describes this dog to a tee. He is a sensitive pup that needs attention and the love of an owner who is willing to understand his special needs. This pup is energetic yet enjoys cuddling. He’ll play with the kids and protect your home from intruders. He may eat more than his share of food, but he’ll repay you with undying affection and loyalty.