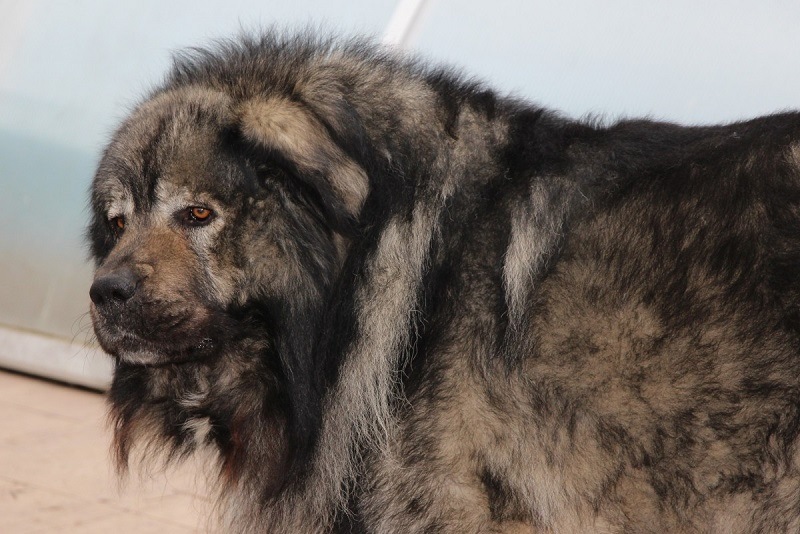 Also known as the Caucasian Shepherd dog, this dog was bred to be a serious guard dog. Their original job was to protect flocks of all kinds from wild predators, and they were very good at their job.

Today, they are mostly a companion animal. However, they are only particularly common in some areas of the world, making them difficult to find in the United States.

This canine is bold and fearless. They are very self-confident when a threat is present, which is what made them such good guard dogs. However, they are also gentle with their family members, including other pets.

Russian Bear Puppies – Before You Buy…

These dogs are not for the faint of heart or the first-time dog owner. Their ancient protective instincts are still powerful today, which makes them a force to be reckoned with. They face threats head-on. This makes them the perfect dog to have watching your livestock or protecting your house.

However, they are not always suitable as your average companion dog. They need a lot of training and socialization to be well-adapted and friendly. This requires a lot of one-on-one work and training from a young age. As you might imagine, not every pet owner is up to the time commitment.

Despite what you may think, though, this dog is not terribly active and doesn’t need much exercise. They’re more of a “fifty-mile-per-hour couch potato.” They can go fast when they want to, but they’d usually much rather lay around.

Like most large dogs, you’re going to pay a few thousand dollars for a Russian Bear dog. It merely takes a lot of room and food to breed them, which drives the price up. They are also quite rare. There is likely only one or two breeders anywhere near you, which means they can price their dogs at whatever they want.

The price will vary quite a bit from breeder to breeder as well. Local competition does not usually drive the price of this breed so that they might cost very different amounts on one side of the country than on the other.

1. The Russian Bear Dog is apart of the AKC Foundation Stock Service.

2. Their ears are usually cropped.

Most dogs have their ears cropped. This was traditionally to protect them from predator attacks. The ears are a vulnerable area. However, some modern dogs are unaltered, especially if they are going to be companion dogs.

3. The Russian Bear Dog is in the Working Group.

These are not your average companion dogs. They were made to work, and their temperament reflects this.

The Russian Bear dog is not your usual family companion dog. They were bred to guard flocks against natural predators and still have many of these traditional instincts today. This means that they only fit into specific families.

They can be very loyal and sweet. However, they are not “gentle giants” like some other large breeds. They are serious guard dogs and will face anything they perceive as a threat head-on. They were bred to attacks bears after all; they don’t stand down to anything.

If a young dog is well-trained and socialized, they can be suitable for family life. However, we still do not recommend them as a house pet for most people. If you need a guard dog that is also gentle with your children, this can be an excellent breed to pick. We do not recommend this pet for the average suburban family, though.

These dogs are usually relatively calm and are not very high-energy once they reach adulthood. As puppies, they can be a little boisterous, but they usually grow out of this in about four years. They can do well in small homes because of this.

It is essential to keep these dogs entertained, as they are reasonably intelligent. When left alone for long periods, they can become destructive.

Not most families. They were not bred to be companion dogs and are very different from most other dog breeds available today. Their first job is to guard; their role as a companion comes after that.

They are very protective and can be easily set off by seemingly simple things. Because they are so large, they can do some real damage as well. Early socialization and training are essential for them to be manageable.

They can if socialized early. They were bred to be around other animals, so they won’t necessarily be aggressive outright. They tend to be okay with livestock and similar animals as well since their original purpose was to guard them.

Things to Know When Owning a Russian Bear Dog:

These dogs need to eat a lot of food. They are huge, and their food consumption is equally as massive. You should expect to spend hundreds of dollars a month feeding them.

On top of this, they need a very high-quality food because of their large size. This is particularly important when their puppies. Most foods labeled for puppies will not do. Instead, you’ll need a food specifically designed for giant breed puppies, which is usually more nutritionally complete and high-quality than other puppy foods. You can expect to pay a pretty penny for it.

Without high-quality food, these dogs will not develop properly. Their joints can be gravely affected by an innutritious diet, and they may not even grow to their full size.

Despite their large size, these dogs do not need much exercise. Adults usually prefer to lounge around the house or field all day, especially if there are people or other animals around. Puppies do need a bit of activity and can be somewhat hyperactive, which can be a problem due to their size.

However, you should never force exercise a puppy because this can cause them to develop joint problems. A fenced-in yard and plenty of playtime is the best option. They should be allowed to lay down and rest when they want to. This includes avoiding walks unless you are entirely willing to carry them back to the house.

In general, you can expect these dogs to be moderately active for about an hour a day. Besides that, they’re going to be laying around.

A post shared by Thor the Caucasian Shepherd (@thorxmarley)

These dogs are not very easy to train. They are decently intelligent. However, they were bred to sit in a field and watch livestock independently without human intervention or guidance. They were bred to make their own decisions, which makes them relatively independent. As you might expect, this makes them challenging to train.

This is one of the primary reasons we do not recommend them for first-time owners. We recommend that you have some dog training experience before deciding to train these dogs.

These dogs can come in a variety of coat types. How much grooming they’ll need depends on the coat they have. Those with longer coats will need to be brushed daily and may need a bath when they are dirty as well. Dogs with shorter hair will not need to be brushed as much at all.

All Russian Bear dogs shed regularly. They are also quite large and have a lot of hair, so you can expect them to lose quite a bit. They can easily cover your couch and the surrounding floor.

Of course, you’ll also have to trim their nails and brush their teeth. They seem to have incredibly fast-growing nails, so you should plan on trimming them regularly.

Like all dogs, these massive canines are prone to a few health problems. Luckily, these dogs do tend to be much healthier than other modern breeds.

There does not seem to be a particularly big difference between genders. Males tend to be a bit bigger than females, but that is the only physical or temperament difference between the two. They are both very good at guarding their house and home.

Some Russian Bear dogs are sensitive to other dogs that are the same gender as them. Because of this, you may want to consider purchasing the opposite gender of any dog you currently have in your household.

Russian Bear dogs are not a breed to be taken lightly. They are massive and were bred for guarding purposes, which their temperament shows quite clearly. They can be overly protective of their family and home, making them a bad choice for most families.

However, with proper socialization and training, they can be the right choice for some families. They are not your typical companion dog and do best when they have some guarding job to do.