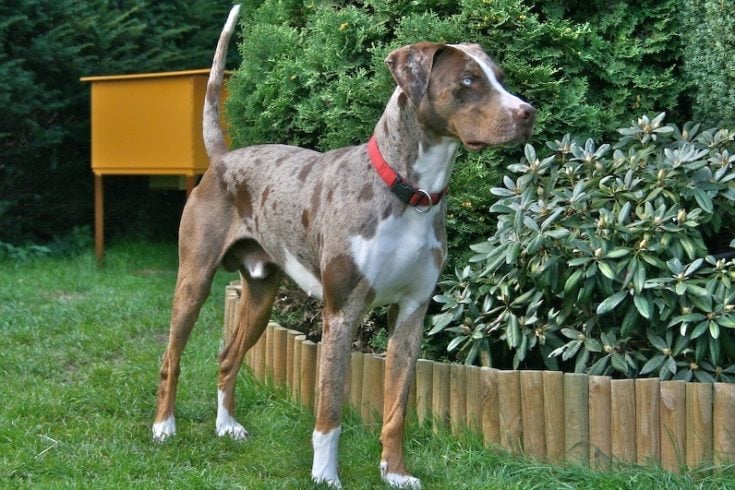 The Catahoula Leopard Dog is also called the Louisiana Catahoula Leopard Dog. This name is attributed to the belief that the dog was initially bred in northern Louisiana. It is an impressive dog breed. Many groups of people bred dogs to fulfill specific working-class holes. This dog lives to work in the swamps of Louisiana.

The Catahoula Leopard Dog is a muscular dog, average in stature with a considerable amount of variations in its leopard-like coat patterns. He is an extremely energetic dog, requiring a great deal of exercise. The need for activity makes him not an appropriate pick for those that live in apartments or small homes.

This beautiful pup is selective in where his affections lie. When he is with his family, he is a very loyal and loving dog with a gentle temperament. This dog has a stubborn streak, making him independent and requiring a strong-willed trainer. This independent attitude is part of his breeding, from working effectively far out in the swamps of Louisiana.

Catahoula Leopard Dog Puppies – Before You Welcome One Into Your Family…

Since this dog worked in the swampy marshes of Louisiana, it has webbed feet. There is some mystery around its breeding throughout the years. We don’t know if they developed this webbed characteristic as an adaptation to the water or if it was bred into them.

2. Native Americans bred a similar version of this dog for hunting purposes.

Although not much is known about this other canine, many have stipulated that Native Americans bred their animals to aid in hunting. These hunting dogs were then used in the developmental ancestry of the Louisiana Leopard Dog since these were already accustomed to the surrounding area.

3. Another name for the dog is a Catahoula Hog Dog.

For those of us that are not familiar with the Louisiana marshes, it may be hard to understand what use this dog had. It is also commonly called the Catahoula Hog Dog because it was developed to herd and protect from the wild hogs that lived in the marshes and swamps surrounding the farms. It also protected the farms and its family from other previously unknown dangers lurking in the swamps.

The temperament of the Catahoula Leopard Dog can vary from puppy to puppy. Since this dog was raised to work hard, it has a very high energy level and needs a home where it can either work hard or play hard.

The variance with this pup mostly comes down to how it feels around strangers. They usually are quite wary around new people, but watch out for a puppy that is aggressive to new visitors or those that are immediately their best friend. These dogs often make good watchdogs, especially if they are trained well. They are very rarely aggressive towards humans.

The Catahoula Leopard Dog has a strong drive to chase and herd. Traits like these can be beneficial in hunting situations or if they are used on a farm, one of the perfect places for them.

The training that these dogs receive, along with their parentage, is incredibly important when developing their characteristics. Trained the right way, they know when to be a watchdog and when to let his territorial tendencies lay dormant.

This energy and hunting capacity don’t mean that it cannot adapt to family life. However, if this is what it is brought into, it will need a lot of companionship, engagement, and stimulating activity to not become destructive.

These puppies are wonderful buddies for older kids. The pure energy of the dog, and even the puppy, make it a dangerous option for toddlers and small children. They would not be aggressive, but may jump up or on the child to get it to “play.” If you want to add another dog to the family, pick one of the opposite sex. Male Catahoula Leopard Dogs may try to express dominance if left with another male in its territory.

Early socialization is crucial when raising a Catahoula Leopard Dog. As stated before, they can be quite territorial. If you purchase another dog, get a dog of the opposite sex. Raised with the family cat, it will typically behave well around it. However, it may chase and show some signs of aggression towards other cats or wild animals around the home.

Things to Know When Owning a Catahoula Leopard Dog:

As always, the quantity that an adult dog eats is dependent on his size, age, amount of daily activity, and metabolism. For an adult dog, the recommended daily amount is between three and five cups of dog food.

It is essential to find a dog food made for high energy hunting dogs. These are typically high in protein and provide them with all of the vitamins and nutrients they need to maintain energy levels and muscle mass.

When feeding your Catahoula Leopard Dog, don’t let them free feed to keep them in better shape. Feed them twice a day, measuring out half of their daily requirement into the bowl and allowing him to eat for ten or so minutes.

The Catahoula Leopard Dog has a very high level of activity. He does best when he has daily tasks to work through to be able to burn up his vast amount of energy. If he is living in an area without lots of space to run or work in, he will need daily long walks. He should get several hours of high-level activity a day to stay healthy and keep from becoming destructive.

Training the Catahoula Leopard Dog well is one of the best things that you can do for him, whether this means investing your personal time or sending him to a puppy training school. Knowing what he is meant to do in specific situations pleases these pups and satisfies them to be able to live peacefully around humans and other people.

Although this dog was bred to do specific tasks for farmers, it can have a dominant and unyielding personality. It often feels, especially regarding males, that it should be the pack leader. A trainer needs to be very firm and earn the dog’s respect. Never use negative reinforcement or manhandle a Catahoula Leopard Dog. They do not stand this and quickly become resentful and may even become aggressive towards the trainer.

The Catahoula Leopard Dog makes grooming maintenance quite easy. The coat of this dog is sleek and very short to keep it from getting weighed down from the water. It sheds a moderate amount, although it is generally not noticeable. It is not hypoallergenic.

The Catahoula Leopard Dog only needs to be brushed about once a week with a slicker brush and deshedder to keep their coats sleek and free of dirt. Unless they are filthy, they don’t need baths but a couple of times a year. Avoid higher frequency to prevent them from developing skin diseases. They need their nails trimmed every couple of months. If they get a lot of activity on rough surfaces, they may only need them cleaned. Check the ears weekly as well since they are floppy and may harbor moisture that can cause infections.

The Catahoula Leopard Dog is generally considered to be a healthy dog. This robust system is primarily due to its large gene pool, having been bred with many other dog breeds in its creation relatively recently.

The dog may suffer from hip dysplasia, but otherwise, the problems to look out for in its health have more to do with its senses. As the dog ages, it may develop eye problems. It also has genes that have been related to issues with deafness. These may lay dormant in them, but it is something to watch out for, especially as the dog gets older.

Although there are many dog breeds in which the differences between males and females are unnoticeable, those like the Catahoula Leopard Dog may make a difference in whether it fits well into your needs and family.

The difference in size between males and females is not vast, perhaps only a couple of inches difference in height and 15 to 20 pounds in weight. With a healthy lifestyle, these differences are barely noticeable.

Due to the territorial nature bred into the dog, finding the right one can take a bit more of a selection process. It is helpful to remember that males are often more dominant and assertive. Its female counterpart tends to be more shy and wary of strangers. Both of them still make good watchdogs.

The energy level between males and females is often recognized as well. Although they both have higher energy levels than many other breeds, males tend to be rambunctious and more destructive if left latent. Females, on the other hand, and less energetic and rowdy in their expression of activity.

A working-class dog is first in the nature of the Catahoula Leopard Dog. Bred for the swamps, it is a serious worker and a clown at heart. A fit for the protector of the family or property, he may be an older child’s fondest friend.

Although this dog is not aggressive, it is a herding dog, thinking of itself as a natural leader. With a firm hand and a loving attitude, Catahoula Leopard Dogs are very easy to train since they want to be put to use.

Not at home in a large city or confined to an apartment, roaming wild and running free is in this dog’s nature. A family on a working farm puts a Catahoula Leopard Dog in seventh heaven.