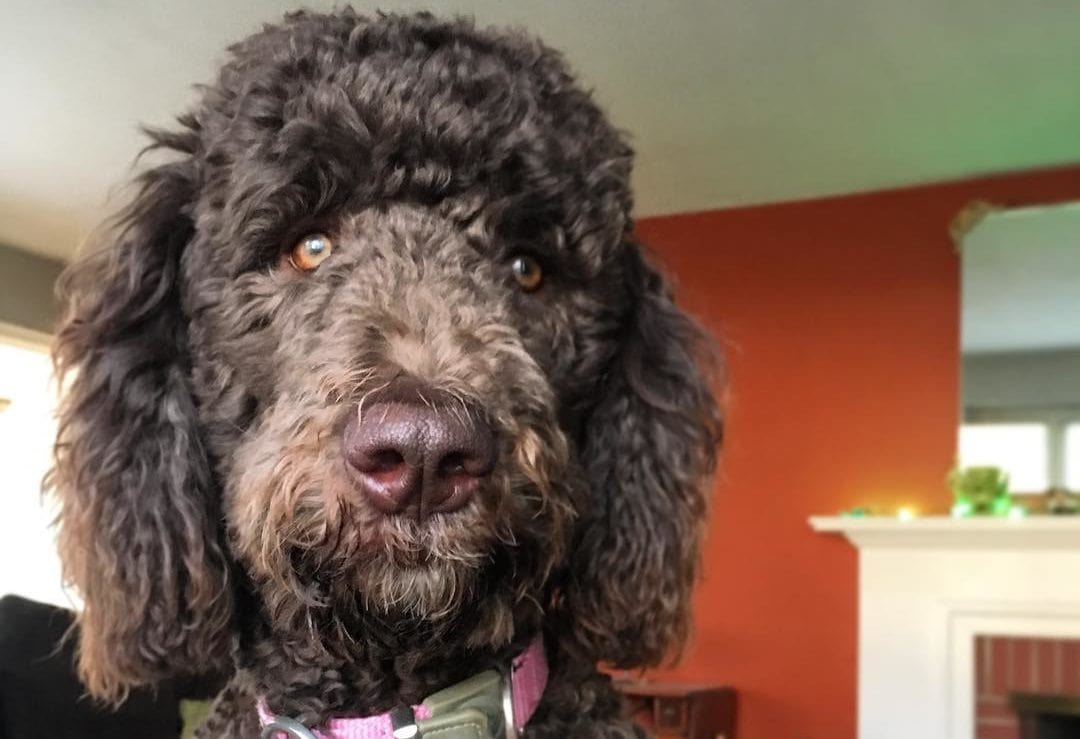 Finding the best dog for you and your family can be tough. There are so many desirable traits you could want, and even more breeds available than you may know what to do with. But what if you could have it all in a single dog?

The Russian Doodle Terrier is one of those rare breeds that may fit the bill. Bred by crossing a Standard Poodle and a Black Russian Terrier, this pup can check most of — if not all — the boxes you’re looking for in a family pet.

They’re deeply loyal to their families and absolutely love children, quickly developing a protective, nurturing nature towards them. Russian Doodles are also quite active and thoroughly enjoy having friends and playmates to romp around with.

Another joy to owning a Russian Doodle is their above-average intelligence. Standard Poodles are among the smartest dog breeds, and this pooch definitely inherits that quality. They can have a bit of a stubborn streak while training, but that’s easily overcome with strong positive reinforcement.

And like the Poodle, the Russian Doodle is hypoallergenic. This means that their coats are very low shedding and don’t bother people with allergies as much as other breeds may.

The Russian Doodle is an amazing dog for those looking for a well-rounded family dog who can truly do it all.

Now, before you go running off to adopt your new Russian Doodle, there are a few things that you need to be aware of.

First, this is not a small dog by any means. You may hear that they’re a terrier and Poodle cross and believe that they’re going to be on the smaller end of breeds. However, this couldn’t be further from the truth. Russian Doodles are a hybrid of the Standard Poodle — the largest of Poodle breeds — and a Black Russian Terrier — a large working breed developed for military use in the former Soviet Union. The breed can reach up to 110 pounds! So, if you’re not ready for a larger dog, you may want to look elsewhere.

However, this doesn’t mean that they won’t do well in apartment living. As a matter of fact, they can adjust quite well provided they get the opportunity for daily exercise.

Next, you’re going to want to ensure that your new pup starts socializing with other people and animals at a very early age. While this is important for most breeds, it’s particularly important for the Russian Doodle. These dogs become very protective of their families — especially children — and they do so very fast. In order to prevent any unwanted signs of aggression to friendly outsiders such as other relatives and family friends, Russian Doodles should be trained to only guard against actual threats.

And finally, if you’re looking to enter this dog into any kind of dog show, you may find yourself out of luck. Since this is a hybrid breed, it is not recognized by any of the major kennel clubs like the AKC or UKC. You may be able to find local dog clubs that put on shows highlighting mixed breeds, but that’s about it.

Russian Doodles aren’t the cheapest of breeds around. You can usually locate one from a reputable dealer for around $2,500-$3,000. However, that normally covers just the upfront cost of the puppy. You’ll need to pick up appropriate bedding, food, and toys which will tack on an additional charge.

Keep in mind that they can also be a relatively expensive dog to maintain as well. And that’s because of two factors: their size and their potential health issues.

They are a large dog and will ultimately require much more food per day than smaller breeds. This means you will end up spending substantially more on dog food in the long run. Also, each of the parent breeds has a genetic history of joint problems. And this can result in more frequent vet trips if these issues present themselves.

So before buying your Russian Doodle, be sure to check their parentage from the breeder to see which genetic conditions may manifest in the future.

1. They come from a lineage of military service dogs.

One of the parent lines of the Russian Doodle is actually the Black Russian Terrier. The Black Russian Terrier (or Blackie) was bred during the late 1940s and early 1950s in Red Star Kennel as military service dogs under the USSR. But that doesn’t mean that the breed was widespread. As a matter of fact, up until 1957, they were solely owned by the Soviet bloc. And it wasn’t until 1998 that the breed was accepted into The Kennel Club — the UK’s oldest kennel club.

The Russian Doodle is a very robust pup in terms of health. However, it does fall prey to joint issues. And that’s because both Standard Poodles and Black Russian Terriers have joint complications. These types of ailments can be passed down from generation to generation. That’s why it’s extremely important to talk to your breeder to determine your pooch’s lineage and family history.

This breed Is large and has a very thick curly coat. However, they don’t really shed too much at all. And with this lack of shedding, there’s a less likely chance that allergy-prone owners will have adverse reactions.

These pups are a very well-balanced pup when it comes to their temperament. They’re loving, gentle, and sweet all the while being protective and alert. Russian Doodle Terriers make for great companions and watchdogs.

This breed is also very intelligent, drawing on the inherited smarts from their Poodle side and their desire to please from the Black Russian Terrier.

This is an excellent family dog. The Russian Doodle is absolutely great with all family members including other pets and children. They especially love children! You wouldn’t imagine them as a nanny dog, however, there’s a natural instinct they possess that keeps “their” children close to their hearts.

The Russian Doodle does well with other pets, particularly when socialized at an early age. While they are part terrier, they don’t exhibit ultra-high prey drives that many other terriers possess. This means that they’re more likely to develop a loving relationship with other pets rather than attack them.

Things to Know When Owning a Russian Doodle Terrier:

So, if you’ve decided that the Russian Doodle is the right addition for your family, there are some basic guidelines you’ll want to know concerning the breed.

Being a large dog breed, the Russian Doodle is going to require a relatively substantial amount of food. You should feed them 3 cups each day of high-quality dog food such as Blue Buffalo Life Protection to keep them at their fullest.

These meals shouldn’t be fed all at once either. Space them out as you would your own meals. This breed isn’t prone to obesity either, so giving them snacks throughout the day is quite all right. Just don’t overdo it.

Russian Doodles are pretty active pups and require daily exercise. We recommend ensuring that your pooch gets at least 1.5 hours of exercise each and every day. And if you have a fenced-in yard, they’ll absolutely love running around and goofing off in it. Either that, or you’ll find them constantly alert and patrolling their domain to ensure no strangers attempt any funny business.

Russian Doodles are very smart dogs and can be very easy to train. However, they may have a stubborn streak at first. Don’t look at this as a sign of low intelligence though. In fact, your Russian Doodle may actually be just testing you and the limitations you put forward. But with strong positive reinforcement, they’ll quickly learn who the master is.

You’ll also need to start with socialization training as soon as possible. Their overprotective nature can quickly get out of hand if no efforts are taken to curb this trait when they’re younger.

Although the Russian Doodle doesn’t shed too much and is hypoallergenic, that’s not to say that they don’t need any grooming. In fact, they should be brushed as often as possible to prevent knots or matting within their hair. Once a day will suffice.

Also, they’re floppy-eared dogs which means that you’ll need to spend special attention on their ears. It’s easy for bacteria or other scum to get trapped within and cause complications. But a wipe down with a damp towel and thorough drying is usually all it takes to keep your pup’s ears healthy.

Overall, the Russian Doodle is a healthy pooch. They’re not as susceptible to heart problems or liver issues as some other dogs. But they do have a few issues that you should be concerned with. First, they may become arthritic or develop joint problems. This is, in part, due to their genetic ancestry and also just the fact that they are large dogs in general. Another issue that you need to keep a watchful eye out for is bloat.

Bloat can become a serious issue if not treated or prevented. To minimize the chances of bloat, feed them smaller meals at regular intervals instead of all their food at once and minimize their exercise immediately after eating.

When it comes to male vs female in this breed, there are very few noticeable differences. Female Russian Doodles do tend to be a bit smaller than the males and are less territorial. Other than that, particularities in your pup will be much more determined by which parent breed they resemble more, both in personality and in looks.

When properly trained, the Russian Doodle can truly be an ideal family dog. They’re loving, playful, and just great with children. And when the time comes to be protective, they won’t hesitate to defend those they love. They’re hypoallergenic, which minimizes health concerns for several owners. And despite their size, they can cope very well with apartment living provided they get their daily exercise.

All-in-all, the Russian Doodle is a great dog, and any family would be lucky to have one join their pack.