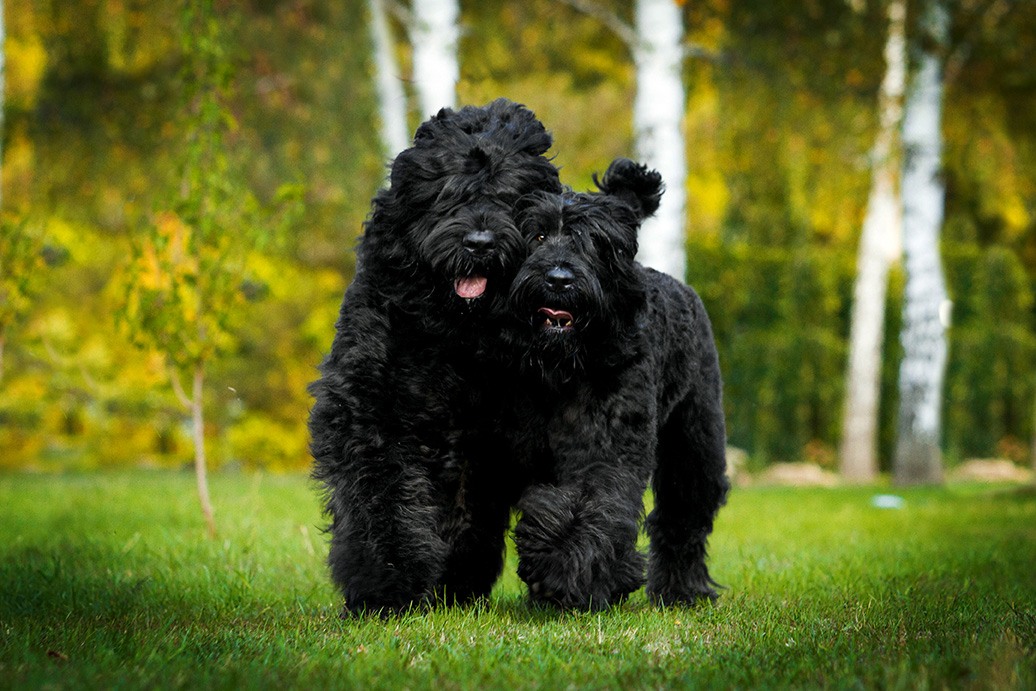 With an origin story straight out of a military science fiction novel, the Black Russian Terrier has made large strides to become the AKC recognized breed it is today. This large Russian breed is the absolute epitome of what it means to be a guard dog.

They’re extremely smart, strong, and confident. Black Russian Terriers (or Blackies) don’t just steal attention and respect, they command it. And if given the opportunity, they will quickly solidify themselves as the pack leader. If not socialized early, they will live in a perpetual state of distrust with those they don’t know.

However, if you’re looking for a working dog to patrol and protect, few dogs can compete with the Blackie’s tenacity.

Black Russian Terrier Puppies – Before You Get One

Choosing a Black Russian Terrier needs to be a very informed decision. These aren’t the best family dogs and can be dangerous if improperly trained. Blackies require a strong, firm hand when training and an individual who’s strong enough to show that they are the alpha.

If you’re unable to demonstrate your strength, your Blackie will walk all over you. This job is made even more difficult with their occasional stubbornness. However, you’ll need to muster the strength to overcome.

They also don’t take too well to strangers or people they don’t trust. This can ultimately lead to unwanted aggression and biting. To break this, they’ll need constant socialization beginning in early puppyhood with dogs and people alike.

Raising a Blackie is not for first-time owners or inexperienced trainers. We only recommend that the most experienced dog owners and trainers take on the challenge of bringing a Black Russian Terrier into their homes.

1. They Have a Comic Book Supervillain Origin Story

Established by the USSR at a secret location near Moscow, the Red Star Kennel was created to develop new breeds for working and militaristic purposes. The group toiled away for years largely unnoticed until the end of World War II came about. In their labs, they experimented with many different genetic combinations until they had created the perfect dog for their intended purpose. The Black Russian Terrier is one such breed whose purpose was to be an effective guard dog that could withstand extremely cold winters.

2. The Black Russian Terrier Was Also Known As The KGB Dog

Black Russian Terriers were first used as KGB and Russian Military prison guards and police dogs. However, the breed’s deep loyalty to a singular master made changing of the guard and transfer of ownership from one master to another exceptionally difficult. So much so that the Russian government stopped breeding the Black Russian Terrier for their needs. The breed only survived due to post-war civilian enthusiasts.

3. The Genetic Makeup of the Blackie is Comprised of 17 Different Breeds

When the breed was being developed, scientists were able to isolate desirable traits from 17 different breeds to develop one super hybrid.

These pups are insanely smart, and they do everything with deliberation. Around their families, they are very people-oriented and will remain close at all times. However, when in the presence of strangers they’ll be quite aloof and won’t hesitate to spring into action if needed. This trait can be somewhat curbed, however, through the use of early dedicated training and socialization.

At times they can be somewhat barky, but that’s only if placed in a situation in which barking is used as a protective deterrent before taking further action.

While these dogs are fiercely loyal and dedicated to their packs and families, we don’t recommend them as traditional family dogs. This breed is considered to be a late bloomer, meaning they don’t fully emotionally develop until later than most other breeds.

That means training will have to continue longer and more aggressively through the dog’s early years. For this pup to be a family dog, the entire family will need to take part in training—including children—to develop a pecking order within your family.

Yes and no. Black Russian Terriers can usually get along just fine with other dogs in the household and even smaller pets such as cats, rabbits, etc. However, the issues only come into play if you have another dominant dog. Blackies feel as if they are the top dog and won’t back down. This is why we wouldn’t recommend bringing them to a dog park. If they come across another dominant personality dog, your Black Russian Terrier will be more than ready to demonstrate why they’re top dog.

Things to Know When Owning a Black Russian Terrier

If you do require the working capabilities of a Black Russian Terrier, there are some basic dog care things you’ll need to know about them.

Blackies are a large breed. And to keep their strength up, they’ll need to have a quality dog food, preferably one high in protein with a moderate fat content percentage.

Dogs of their size should eat anywhere between 4-6 cups of food every day depending on whether they’re in a growing stage or have performed excessive physical activity.

They also tend to overeat and will have no issue with swiping your freshly prepared sandwich off the counter if left unattended — so be careful with your food.

You may think that with their original purpose and size that the Black Russian Terrier requires a ton of exercise, but that’s just not the case. These pups only need approximately 30 minutes of exercise a day to keep them happy.

However, they do require more mental stimulation than physical activity. They love to be needed and giving them a purpose or job goes a long way with developing a pleasant temperament and demeanor.

Blackies are a very smart breed. After all, they were developed to follow complex commands and operations for the Red Army. But they can be a bit stubborn at first. This isn’t because they’re unable to comprehend the commands, but they’re testing their boundaries and limits with you.

At this point, you need to stay strong and not back down. Once you’ve established your role as pack leader and master, you soon find your Black Russian Terrier very amicable to work with and train.

One of the biggest side effects of all the crossbreeding and genetic isolation conducted to create this breed is the bevy of health problems that Blackies can experience. On the outside, they’re relatively rugged creatures capable of adapting to hot or cold climates. However, they have a huge number of medical conditions they are predisposed to.

Male Blackies are often slightly larger than the female as with most dog breeds. However, the females tend to be the more gentle of the two sexes. All in all, the unique temperament of your Blackie will be determined more from its unique set of parents than from its sex.

While this can be an intimidating canine, we don’t believe that the Black Russian Terrier is a bad dog by any stretch. Ask any loving owner of a BRT and they’ll have plenty of stories about how devoted and loving their pooch is. And we believe them!

The Black Russian Terrier can make for a great pet. You’ll just need the strength, patience, and dedication required to ensure that they’re properly raised and trained.