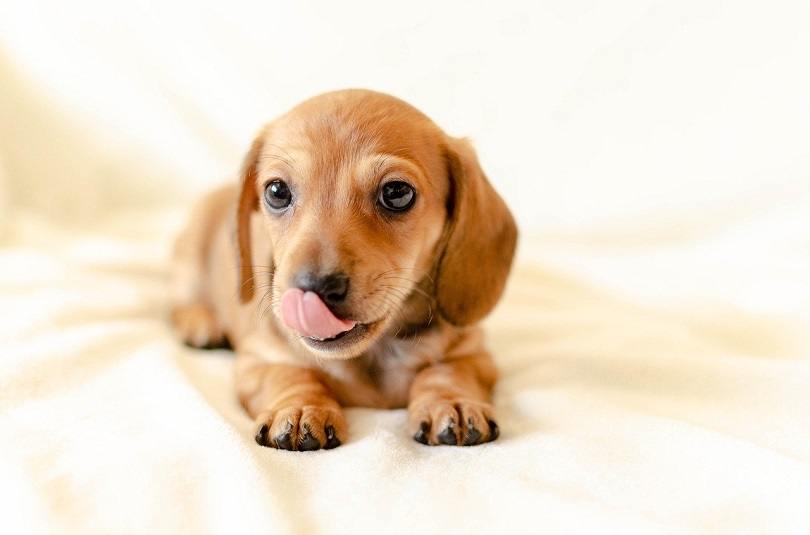 If there was a competition for the cutest mixed breed dog with an adorable name to match their looks, then the Schweenie may take top place. This cute and characterful hybrid comes from breeding a Dachshund and a Shih Tzu.

This Dachshund Shih Tzu mix have a huge amount of personality and will need an experienced owner to cope with their slightly stubborn nature and tendency to bark at everything.

Schweenies as a breed haven’t been around for that long, so you might not know as much about them as better-known pedigree breeds. In this article, we’ve rounded up everything you need to know to decide if the sweet Schweenie is the perfect dog for you.

Schweenie Puppies — Before You Buy…

We’re sure that as soon as you lay eyes on a tiny and incredibly cute Schweenie puppy, you might find it nearly impossible to resist them. But we recommend spending a little more time getting to know the main characteristics of this breed.

Schweenies also love to bark. So, a good training foundation will make life so much easier with these small but mighty pups.

What’s the Price of Schweenie Puppies?

As Schweenies are still not that well-known of a cross-breed, you’ll need to do a bit of research to find a reputable breeder. The price that each breeder will charge will depend on a few different factors, including the breeder’s experience. As a guide, you should expect to pay somewhere within the $800 to $1,200 bracket.

While searching for a low-cost bargain is a good idea in some cases, forget about it when it comes to choosing a puppy. This little bundle of joy is going to be with you for a long time, so it’s far better to spend your money on a great quality puppy rather than run the risk of expensive veterinary bills in the future.

Any reputable breeder will be more than happy to speak to you in detail about their breeding program and answer any questions you may have.

Three Little-Known Facts About the Schweenie

Both Shih Tzus and Dachshunds are well known for their love of barking, and the Schweenie is no different. If you don’t spend the time training your new puppy not to bark at everything, then this can easily turn into a bad habit. If you value peace, as well as good relations with your neighbors, then enrolling in puppy training classes to learn tactics to help your Schweenie control their barking will be time and money well spent!

In German, Dachshund translates as badger dog, and this was the breed’s initial purpose, to flush out badgers from their setts. The low-slung and small body of the Dachshund were purpose-built for this task. No one has told Dachshunds how tiny they are, so they seem to have the courage of a much larger dog. It does mean that you’ll need to keep an eye on your Schweenie if they inherit this courageous yet slightly foolhardy trait.

This ancient breed has its roots in Chinese history and was kept hidden inside the walls of the Chinese palaces for centuries. When these pampered little lap-dogs were finally seen by the outside world, they soon had a legion of fans across the world.

Temperament & Intelligence of the Schweenie

While the Schweenie might be small, don’t let this fool you into thinking that they’re going to be a cute and quiet lap dog. Both the Shih Tzu and Dachshund are intelligent little dogs with larger-than-life personalities, so your Schweenie puppy is likely to be the same.

Sometimes, this smart nature can also cause Schweenies to be a little on the stubborn side. They know their minds, so don’t be surprised if they suddenly decide that a training session is over! That doesn’t mean they don’t love their owners, though, as nothing could be further from the truth. These little pups are happiest when they’re involved whatever their owners are doing.

Schweenies are friendly little dogs with a zest for life. They’ll love going out and about on adventures with their owners, and the great thing is that when their little legs get tired, you can simply pick them up!

They are a little snappier than some other breeds, so they will let you know if they want to be left alone or if someone is sitting too close to their bed!

Schweenies can indeed make good family dogs, as long as everyone in the household is aware of their quirks. They tend to like their own space and won’t appreciate pets or people invading what they see as their personal space. Training your Schweenie to use a crate where they can be on their own can be a good idea.

While their playful nature means they will enjoy spending time with young family members, they’re not as tolerant as other breeds. Remember that younger children won’t necessarily be perceptive enough to pick up on warning signs that your Schweenie is getting tired of the attention. If smaller warnings go unheeded, a Schweenie will growl, bite, or snap to get their point across.

That means they’re usually better suited for families with slightly older children who can understand and respect the Schweenie’s need for personal space. Good training (of dogs and children!) will also go a long way to making sure that your Schweenie feels safe and secure as part of a family unit.

As a rule, yes. But again, the Schweenie will let other pets know if they’ve overstepped the mark. Their playful nature means they’ll enjoy interacting with other pets once they’ve been introduced properly.

Make sure you keep initial introductions short and carry them out in a safe and enclosed space.

Schweenies won’t appreciate other pets taking over what they see as their territory, so if your puppy has a crate or particular corner of the room where their bed is, then try to keep that specifically for their use.

Things to Know When Owning a Schweenie

Don’t let the small size of the Schweenie fool you into thinking they’re going to be a low-maintenance breed, because they’re not! Before you decide if this is the breed for you, we’ve summarized a few more things you need to know about these little dogs.

It’s important not to overfeed your tiny Schweenie, so even if they look at you with those big eyes, resist the temptation to feed them more than their allocated amount. Because most Schweenies inherit the long back of their parent breeds, they can be prone to slip or ruptured discs. By maintaining a healthy weight, you can keep the pressure on their back to a minimum.

Selecting a high-quality dog food designed for small breeds is your best bet — and no table scraps! Human food contains more calories and fat than your dog needs, and due to their small size, it’s quite easy for a Schweenie to put on weight, so it’s best to stick to their regular diet if you can.

Using food as a reward when training is an excellent way to motivate your Schweenie, but be sure to adjust their regular meals accordingly.

The amount of exercise your Schweenie needs will depend on what sort of traits they inherit from their parents.

Shih Tzus aren’t overly active dogs, so they will be happy with a short walk or indoor playtime. Dachshunds, on the other hand, need a bit more exercise to burn off energy. If your Schweenie falls somewhere in the middle, then expect two short walks and playtime to be enough per day.

Because of their long backs, you should be careful not to let your Schweenie jump off furniture or climb stairs. You can get special ramps that allow them to walk up onto your couch, which can protect them from injury.

Shih Tzus are incredibly cute, which is great until you try to train them and have to use the dreaded word “no.” Plenty of Shih Tzu owners will admit that they just let their little dog get away with things, rather than correct them. While that’s an easy option at the time, in the long run, it does mean you’re left with a badly behaved dog whom you don’t know how to correct. And that’s not fun for anyone! Dachshunds are more receptive to training, but they can also be stubborn, as well as easily distracted if something seems more interesting than what you’re asking them to do!

You’ll have to experiment to see what methods best suit your Schweenie, and the best way to do that is by signing up for puppy classes.

How much you need to groom your Schweenie will depend on whether they inherit the short coat of the Daschund or the longer coat of the Shih Tzu. What’s most likely is a combination between the two, in which case, you can probably give them a good groom once a week to remove tangles and keep your puppy’s coat in good condition.

If your puppy ends up with longer hair, then you can always take them to a groomer for a professional trim that will keep them looking tidy.

It’s also a good idea to get your Schweenie used to have their ears and teeth checked regularly, as well as having their nails trimmed around once a month.

Hybrid bred puppies are usually healthier than their pedigree counterparts, and while that’s true for Schweenies, there are a few conditions to be aware of. The long back of Schweenies can also cause them problems if they’re allowed to become overweight.

By now, you might be nodding your head and thinking that the Schweenie is indeed the perfect breed to join your family. Now the only thing left for you to decide is whether to choose a male or female puppy.

Before you do choose, remember that each Schweenie puppy is an individual. You might surprise yourself by thinking you want a female Schweenie but then immediately bonding with a male pup when you visit the breeder. The best thing to do is to put any preconceptions about which sex you prefer and select a Schweenie puppy based purely on their personality.

Certain hormonal differences will be almost canceled out if you decide to get your puppy spayed or neutered, in any case.

What the tiny Schweenie lacks in size, they make up for in personality. These little dogs enjoy a moderate amount of activity, so they can fit in well with families who don’t have as much time for exercising a more energetic breed.

What you will need to spend time on, though, is training. Schweenies can be stubborn, prone to barking, and tricky to toilet train. All this means that investing in a course of puppy training classes is going to be money well spent.

Schweenies will get on well with other pets and children, but they also like their own space. If you can provide them with everything they need to be happy, then they’ll keep your family well entertained with their antics.