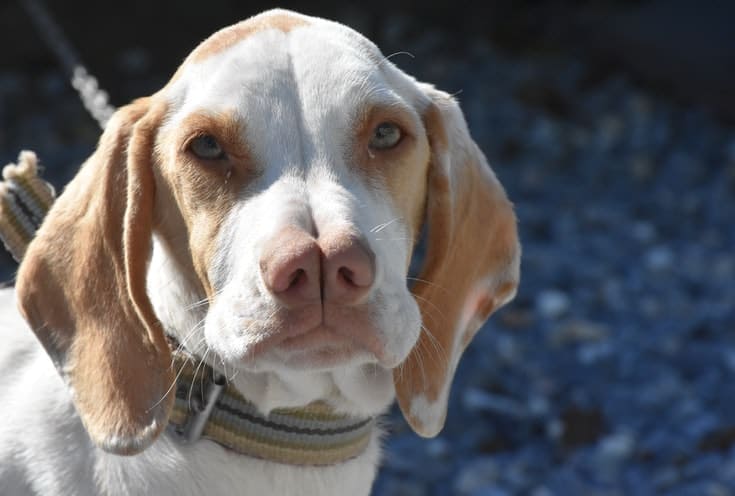 The Tarsus Catalburun is one of the rarest dogs in the world. So much so that it is believed that there are less than 200 left in the world.

This rare pup is hard to find in America, and if you are lucky enough to own one, you are probably going to be the only one in your state. And his unique facial features, people will try to stop you on the street for a selfie.

But, this guy is not sociable, and he is a very protective dog too. He is not suited to most families. But for those that can handle him, he makes a great family pet.

Think you can handle the Tarsus Catalburun? Let’s find out more.

Tarsus Catalburun Puppies – Before You Welcome One Into Your Family..

When trained well, he is aloof with strangers. When not trained, he is protective and can be aggressive and dominant towards strangers on his property. This means you need to secure your yard and leave no stone, or gap, unturned.

But, if he is well trained, he is a delightful family pooch that is a pleasure to have around the home.

1. The Tarsus Catalburun has a double nose.

He is only one of three dog breeds in the world who has a double nose or a fork nose as it is also referred to. The other two breeds are Pachon Navarro and the Andean Tiger Hound.

He has the choice of two different jackets. Either, a short-haired coat that is shiny and sleek, much like a Pointers coat. Or he can choose a medium-length coat that is thick and dense.

3. The Tarsus Catalburun is also known as the Turkish Pointer.

He looks very similar to a Pointer, and he also has a similar prey drive to a Pointer. We say similar because you need to double their prey drive, times that by ten, and you might be somewhere close to his prey drive. He is described as having an aggressive prey drive, so you best be able to handle his strength when he catches the scent of a squirrel.

Temperament & Intelligence of the Tarsus Catalburun 🧠

You already know about his protective streak, but what else is there to the Tarsus Catalburun? When it comes to his family, he is sweet and loyal. He’s not overly affectionate, but every now and then, he will get the overwhelming urge to cuddle you. When he does this, be sure to enjoy it, because it will not happen every day.

He is calm in the family home and likes to lay by the windows, keeping a watch of his property or in the porchway. Outside enough that he can keep his beady eyes on the perimeter, but close enough to you that he can protect you too.

When trained well, he is a fun-loving dog who likes to have a good time with his family. He’ll love a game or three with his loved ones, and being energetic, he’ll go on for hours if you have the time for it! Again, make the most of it when he does because he doesn’t always take time off from his protecting duties.

Because he is protective, he makes a fantastic guard dog, and this guy has a tremendous bark. If he barks in the middle of the night, there’s probably a good reason for it. And you can be sure that he’ll wake up the whole neighborhood too.

He is intelligent, and because of his loyalty, he is very trainable and obedient. This is great if you are after an obedient dog who will always respond to heel. Not so much if you haven’t got the time or energy to look after such an intensely intelligent dog. When bored, this guy can be very destructive.

Yes, the Tarsus Catalburun makes a beautiful family pet, but only if he is trained well and if he is placed with the right family. If he is not trained well as a pup, he can be unruly and overprotective, and often too much for the average family to handle.

His ideal family needs to be energetic and willing to play and cuddle him when he wants. As well as being able to spend most of their time with him just so that he can keep an eye on them.

When well trained, he is excellent with children, and he is patient with their overzealous hands, and he will love to lay and sleep next to them. Because of his protective nature, he is very fond of the little ones in the human pack.

Because of his energetic nature and his fondness for the outdoors, he needs to live in a larger home. He also needs to have access to an outdoor yard. Without these, he will get cabin fever and become problematic. This dog does not like to be cooped up, so apartment dwellers should choose another breed.

On another important note, you need to make sure that your yard is secured and that he cannot escape. Because no matter how well trained he is, he is a protective dog by nature. And if he feels as though his family is in danger, he will protect them. So, to avoid any accidents, make sure he cannot escape.

This all depends on how well trained and socialized he was as a pup. If he was, he is a well-mannered doggy who will get along with other dogs and family pets. If not, he will struggle to live with other pets because he’ll see them as a threat.

Yes, this is the same as any dog, but it is particularly true of protective dogs like this. So, it depends on his upbringing.

He does have a high prey drive, so it’s best to keep him on a leash while out in public. Although he will happily live with other pets and he’ll respect them as a pack member, any small animal outside of the family unit is fair game. He will chase them and being athletic and agile. Don’t be surprised if he comes back with a squirrel in his mouth.

Things to Know When Owning a Tarsus Catalburun

Now you know just how intense this guy is, let’s take a look at his day-to-day needs.

The Tarsus Catalburun is a medium-sized energetic dog, and he’ll consume approximately 2 ½ cups of dog food a day. This will be dependent on his size, age, and energy levels, so be sure to follow the package instructions carefully to avoid too much weight gain.

Feed him a high-quality kibble that will provide him with a well-balanced diet. This includes meat protein, carbohydrates, fiber, omega fats, vitamins, and minerals.

Always feed him a kibble that is life-stage appropriate. For example, if he’s a puppy, feed him puppy food, and if he’s a senior, provide him with senior food.

The Tarsus Catalburun needs around 60 minutes of intense exercise a day. He’s happy to do whatever, just as long as he has you by his side. Because he is an intelligent dog, you need to mix up his exercise to ensure that he doesn’t become bored. And, remember that whatever activity you decide to do with him, it needs to be one where you can keep him on a leash.

He will also need mental stimulation throughout the day. Thankfully, because he is so trainable, a great way to excite his mind is to teach him new tricks. This will keep his mind stimulated and strengthen his bond with you too. Take a look at some of these easy brain games that will give you ideas on how to keep him busy when you’re at home, and he’s looking restless.

When it comes to training the Tarsus Catalburun, it requires an experienced dog handler and one who has previously dealt with other protective dogs. This guy is not for the novice dog owner.

He is an extremely protective dog who needs through socialization as a pup to ensure that he doesn’t become overprotective and aggressive. His breeder will begin socializing him straight away, and you must continue this training with him as soon as you bring him home.

Without this, he will become dominant and aggressive, and this guy is not to be taken on lightheartedly. His training is a lifelong commitment.

Thankfully, he is intelligent and loyal to his master, which makes him trainable and obedient. Utilize the positive reinforcement training method, and he’ll learn your commands in no time.

His grooming schedule is entirely dependant on what type of coat he has. If he has the shorter coat, similar to the Pointer’s, he’ll only need brushing once a week. If he inherits the thicker and longer jacket, he’ll require brushing twice a week or so. As you brush him, check his body over for any lumps or changes in his appearance that might need vet attention.

The Tarsus Catalburun will need a bath once every two to three months. We always advise using gentle formulas such as oatmeal shampoos, especially if he has sensitive skin. Be sure to keep his large ears clean, and always dry them thoroughly to avoid a build-up of bacteria or yeast infections.

The Tarsus Catalburun is a heavily inbred dog breed, simply because there are few of them left. Thankfully, they appear not to be affected by this, and they are a relatively healthy breed who suffers from few health concerns.

There is very little difference between males and females. The only noticeable difference is that the males tend to be on the larger end of the height and weight scale compared to females.

When it comes to his personality, his training as a puppy and his family environment are the two most influential factors.

The Tarsus Catalburun is a scarce breed. And with only 200 left in the world, there is a big chance that, unless you import one of these beautiful pups from Turkey, you might never get the opportunity to meet one.

But, if you are set on this guy, and you know that you can tick all of his boxes, we know that you’ll thoroughly enjoy your time with this incredibly unique breed. He is sweet and gentle with his family, and ferociously protective of his estate. As long as you can commit to lifelong training and hard work, you will be rewarded with a special doggy bond for sure.

How Much Does an Old English Sheepdog Cost? (2023 Price Guide)