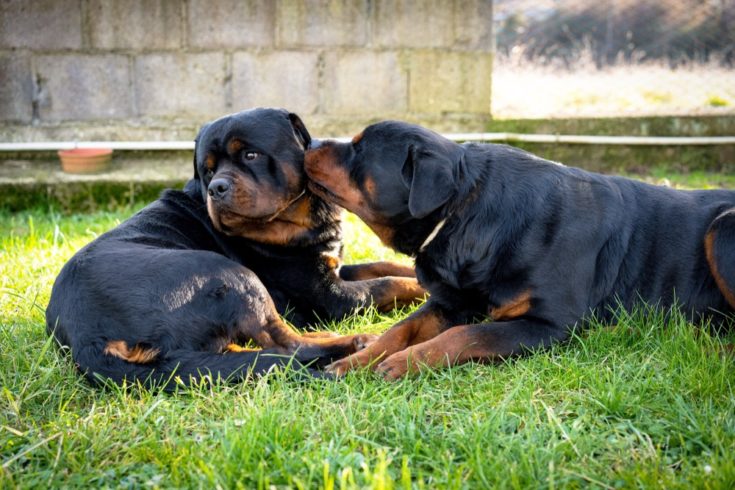 There’s nothing quite like owning a dog. They curl up next to you on the couch, and you lean over to scratch their ears — but wait. What is that smell?

Yep, it’s your dog — and you know exactly what they just did. While all dogs are capable of flatulence, some breeds are much more prone to it than others. So which dogs fart the most?

The dogs on this list can fill your home with a variety of aromas, so be prepared to deal with their odors (and keep them away from open flames). They’re still great pets, of course, but you’ll find that they’re much easier to love if you crack open a window first. Here are 10 gassy dog breeds to know:

There are a variety of Mastiff breeds in the world — English Mastiffs, Neapolitan Mastiffs, etc. However, they all have at least one thing in common: an ability to clear whatever room they’re in immediately following dinner.

It’s to be expected. These are huge dogs, so they have more room in their digestive tracts for kibble — and other things. They can unleash truly titanic amounts of flatulence, but don’t worry — they’ll usually wait until they’re sitting right next to you to let one rip.

Like Mastiffs, any breed of Bulldog is capable of conjuring up truly rancid swamp gas. English Bulldogs seem to be the champs of this particular group, though, as they can emit more gas than you’d think possible from a dog that compact.

It’s thought that the reason these dogs are so gassy is that they’re brachycephalic. This means they have short noses, which often leads to breathing problems. All that trapped air has to go somewhere — and you know where it’s coming out.

Boxers are one of the most enthusiastic dog breeds on the planet. They go all-out when doing anything, whether it’s playing, jumping on you for affection, or trying to cause every plant in a nine-block radius to wilt.

These dogs usually have sensitive stomachs, which likely contributes to their gassiness. They also plow through their food with reckless abandon, so if their flatulence gets out of control, you may want to try to slow them down at dinnertime.

These dogs are incredibly gassy, and they can keep going long after you’d expect them to have emptied their tiny bodies. Their brachycephalic nature is probably to blame. At least they’re polite and willing to share, though, as they often wait until they’re in your lap before letting loose.

These dogs are a small breed that can pack a wallop. It’s likely due to the fact that these little adventurers will get into all sorts of things and often eat stuff that they shouldn’t.

It’s still kind of surprising that Beagles would be so gassy, though. They have one of the most potent noses of any dog, so at least take solace in the fact that they’re suffering more than you.

These dogs are known for having a reputation as golden as their name, so it’s somewhat surprising they’d be on a list like this. But nobody’s perfect, not even a Golden Retriever.

It’s hard to say exactly why Goldens are so gassy, but it may be due to how active they are. All that running and jumping is sure to stir things up on the inside to the point that it can only come out in truly devastating ways. Fortunately, these dogs insist on being by your side at all times, so you’ll be able to share in their misfortune.

Pit Bulls have a ferocious reputation, but they’re far more likely to attack you with their bowels than they are with their teeth. These dogs are capable of near-constant, rapid-fire flatulence, so you may never get much respite from their olfactory assaults.

Pit Bull emissions aren’t like those that you’d experience with a Bulldog or Mastiff, either. While those breeds will announce their flatulence with loud butt trumpeting, the Pit Bull is more likely to develop a slow, silent leak.

Known for being excellent guard dogs, the Rottweiler will use every tool at their disposal to protect their families — and that includes chemical warfare. Of course, like any good dictator, they’re more than happy to use those weapons of mass destruction on their own people as well.

Rotties are complete Velcro dogs, so they’ll almost certainly curl up in your lap before unloading the contents of their digestive tract into the surrounding atmosphere. Look on the bright side, though — you never see any bad guys around immediately after they break wind, do you?

Most of the breeds on this list are on the larger side, so Boston Terriers really have to overachieve in order to stand out. Fortunately, they’re more than up to the task, as they can create butt bubbles that will leave you gasping for clean air.

They have sensitive stomachs and short, stubby noses, perfect for creating a flatulent dog. Luckily, they’re pretty cute, so you’ll be more than willing to put up with a little foul stench to have one by your side.

German Shepherds are frequently at the top of many “most intelligent dog” lists, so it’s no surprise that their flatulence should be more sophisticated than many other breeds. These dogs don’t just let it rip; instead, they prefer the “bust and bail” method.

That means they’ll walk right up next to you, let one rip, then walk away before it hits your nose. By the time that you realize what happened, they’re a safe distance away — and you’re too far inside the blast radius to escape.

The dogs on this list are all loyal, loving, and adorable — and each one can peel the paint off your walls after dinner. It’s amazing how much gas some of these pups can conjure up, so it’s a good thing that they can create an equal sense of devotion in their owners.

It’s not all bad, though. After all, if you have one of these dogs in your home, then you have a ready-made scapegoat the next time that you’re the one who dealt it.

5 Easy Ways To Keep Your Dog Out of The Pool