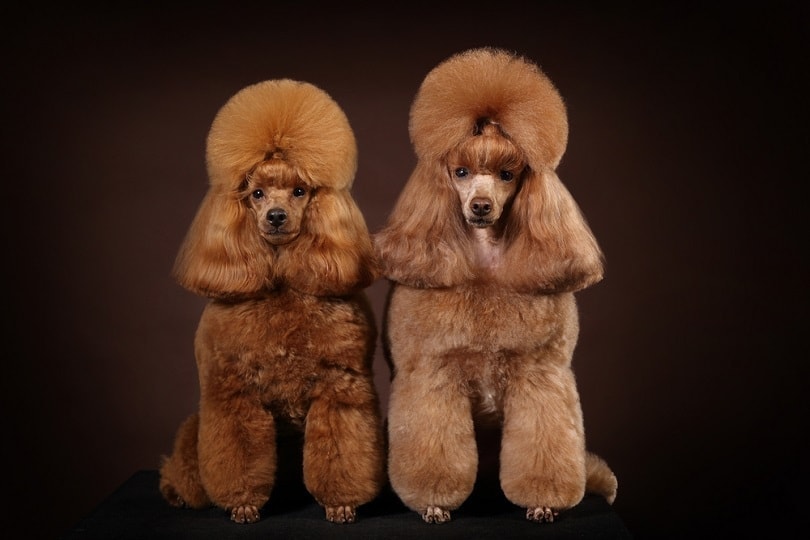 A clever, curly-haired, and cute purebred pooch, the Poodle is the seventh most popular dog breed in America. Poodles are considered to be one of the most intelligent breeds in the world and are easy to train. In fact, they’re quite happy to tackle any task you put them to.

Poodles are easy to spot thanks to their iconic curly coats. However, not all Poodles are created equally. This breed is available in a variety of different sizes, shapes, and shades. Here are the six different types of Poodles that make phenomenal pets.

The 6 Types of Poodles

Weighing in at around 90 pounds, the Standard Poodle is the largest and most common variety of this canine breed. Standard Poodles grow to stand at least 16 inches at the shoulder and are known for their docile demeanor. However, don’t let their layback personality fool you. When push comes to shove, a Standard Poodle can be brave and protective over his human pack.

If you’re seeking a pint-sized pooch with a big personality, look no further than the Miniature Poodle. This adorable mid-sized dog weighs between 14 and 18 pounds and stands at least 11 inches at the shoulder.

Also known as dwarf or Nain poodles, Miniature Poodles are loyal, lovable, and loaded with energy. These small dogs do best in active families where they can enjoy daily doses of exercise.

Want a dog that you can fit inside your purse? The Toy Poodle is a tiny little pup with a lot of love to give. They typically weigh no more than 10 pounds and stand eight inches at the shoulder. While their small size makes this breed the ideal lap dog, Toy Poodles need at least an hour of exercise every day. A bored or lonely Toy Poodle can easily pick up bad habits, such as excessive yapping.

If you’re on the hunt for an even smaller dog, the Teacup Poodle may be the perfect pooch for you! While they aren’t recognized by major dog breed registries, the Teacup Poodle is still adored by Poodle enthusiasts the world over.

Teacups weigh between five and seven pounds. However, their petite frame makes them susceptible to numerous health issues, including heart defects, seizures, blindness, and digestive problems.

Before you bring a Teacup Poodle home, be sure you’re fully educated on the health issues your pet may face later in life.

Tipping the scale at 80 pounds, the Royal Standard Poodle is a thicker version of the typical Standard Poodle. This dog has large feet, a deep chest, and is hailed for his bravery and intelligence.

Also called the Klein Poodle, the Moyen Poodle is not recognized by the AKC. However, the UKC views this breed like a Standard Poodle and even allows them to compete in top-level dog shows. The Moyen Poodle weighs between 40 and 50 pounds and stands 20 inches high at the shoulder.

Whether you decide to get a Standard or Miniature Poodle, you can rest easy knowing that any type of Poodle will make a great addition to your family. These intelligent, loyal, and protective dogs go above and beyond for their owners and will provide you with years of unconditional love and affection.

Do German Shepherds Have Dewclaws?

20 Dog-Safe House Plants for Your Home

Can Dogs Eat Cheetos? Are Cheetos Safe for Dogs?