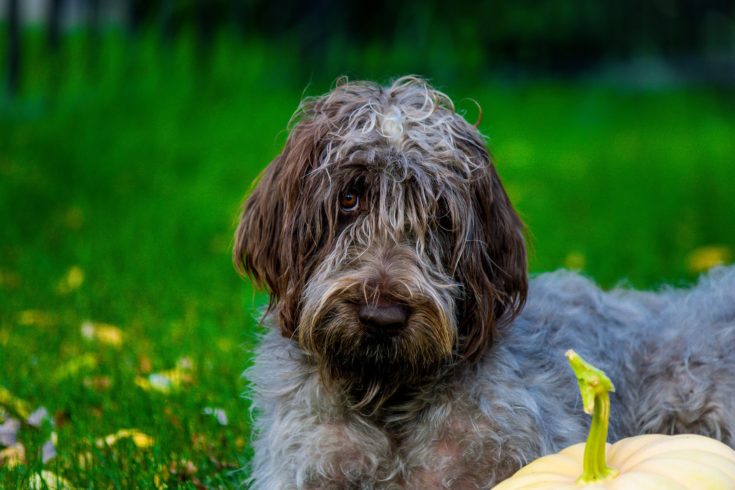 Some say that Wirehaired Pointing Griffons are the ultimate gun dogs. The creation of Dutch hunter Eduard Korthals, WPGs were bred to traverse any terrain, running nimbly across the treacherous swamps of the Netherlands to retrieve birds and game.

In 1917, an admirer praised “his ready adaptability…his exquisite nose, wonderful vitality and endurance, and the pronounced instinct which makes him the easiest of all dogs to train.” A hundred years later, Wirehaired Pointing Griffons continue to win devoted human fans with their sharp intellects, grimy-cute looks, and boundless energy.

Check out our complete guide to the WPG and find out if this master hunter could be your next canine companion.

Wirehaired Pointing Griffon Puppies – Before You Get One…

A post shared by The Good Life Griff (@thegoodlifegriff)

1. They’re Probably Not Related to the Brussels Griffon.

Brussels Griffons are some of the most storied pooches in Western Europe. However, although the Wirehaired Pointing Griffon shares a name with them, the two breeds aren’t actually related. In European dog breeding, “Griffon” refers to any dog with a coarse coat — the fur that gives the Wirehaired Pointing Griffon both its name and its signature “just rolled out of bed” look.

2. They’re Known as Pointers, But Can Do So Much More

People who love the “Griff” praise lots of its traits, but perhaps none so much as its versatility. Some dogs are great pointers, some are great trackers, and some are great retrievers, but Wirehaired Pointing Griffons excel in every area. Their noses can’t be beaten, they’re highly intelligent, and they’re even champion swimmers.

WPGs have a reputation as a good choice for allergy sufferers, but unfortunately, they do still shed a little. That said, Griffs will leave a lot less dander around than most dogs. If you’ve been putting off adopting a pooch because of allergies, it’s worth your while to meet a Griff.

Wirehaired Pointing Griffons are best known for being extremely trainable. As members of the sporting dog category, they love to show off feats of athleticism and are especially proud of themselves when they successfully follow their master’s commands.

But life with a Griff isn’t all running and hunting. They’re also friendly and sociable, making for devoted family members with a strong bond to all the humans in their pack. Griffs enjoy having things to do and won’t take well to long periods of confinement or inaction. If you plan to adopt one, make sure you have lots of time to spend on it.

Wirehaired Pointing Griffons make ideal family dogs. They’re generally chilled-out and unlikely to be provoked by small children. The more people in the house, the more playmates, so Griffs are almost always happy in large families.

Like with any dog, you shouldn’t take the Wirehaired Pointing Griffon’s laid-back attitude for granted. The earlier it’s introduced into the family, the better it will get along with everybody. Also, Griffs are medium-sized dogs, so if you do have children under the age of three, keep an eye on the Griff around them.

Griffs are happy to get along with other dogs and cats, but this will be easier if the Griff is introduced to them as a puppy. As a hunting dog, it likes to chase fleeing game, so teach it early that cats and smaller dogs are friends and not prey.

Things to Know When Owning a Wirehaired Pointing Griffon:

Wirehaired Pointing Griffons have the same general food requirements as most dogs. A high-quality dry food will serve them just fine, as long as the ingredients provide them with meat, fat, and fiber. Feed them twice a day at regular times.

A 35-pound Griff needs about 2 cups of dry food. At 50 pounds, they’ll need 2 3/4 cups per day and up to 3 1/2 cups per day at their peak size of 70 pounds. Remember that puppies always need more and that you should have clean water available at all times.

A Wirehaired Pointing Griffon is no slouch. Griffs have both big brains and bottomless reserves of energy — they need to be entertained frequently lest they take out their boredom on your furniture. Take your Griff walking or running for at least an hour every day, and make sure it gets to run around off-leash from time to time.

Swimming is a great activity to do with your WPG. They also love obedience and agility training, and any other situation where they get praised for running and playing. They’re fantastic companions for lengthy hikes.

Wirehaired Pointing Griffons were bred to be gun dogs, so they readily accept training. However, Griffs don’t respond well to harsh or “alpha” training methods. The best way to train them is either with hunting, which they take to naturally, or with hunting-like activities.

Use the promise of playtime as a reward, and the end of playtime as a punishment for harmful behavior. While training, regularly give your Griff chances to solve puzzles and exercise its powerful mind.

Griffs are relatively low-maintenance, low-shedding dogs, but their coats do require some attention. Brush your Griff weekly to keep its wiry coat from tangling. If you find it’s getting hard to run a brush through its fur, you might need to strip it by hand to help the coat turn over. You can learn to do this yourself or go to a professional groomer instead.

Other than hair, you’ll need to brush your Griff’s teeth and clip its nails at least once a week. It’s a good idea to trim its ear hair regularly to prevent infections.

Griffs are generally healthy dogs. Like a lot of gun dogs, they were bred for hunting skills rather than looks, making them fit, active specimens overall. Most of their common health problems are minor.

Hip and elbow dysplasia: Dysplasia refers to a malformed hip or elbow joint, which can start causing pain at any point in your dog’s life. Dysplasia conditions are not fatal, but if unchecked, can decrease a dog’s quality of life. Breeders are required to screen parents for the dysplasia gene, but it’s still possible that a Griff could be born with the condition.

Ear conditions: Wirehaired Pointing Griffons might come down with the scary-sounding otitis externa, but don’t be too frightened — it’s just an ear infection. To prevent ear discomfort, trim your Griff’s ear hair, and clean their ears carefully if you see redness, grit, or swelling. Otitis externa can be treated with ear drops.

Physically, male Griffs are much larger than females. A female WPG weighs between 35 and 50 pounds and stands between 20 and 22 inches tall; a male reaches anywhere from 50 to 70 pounds and 22 to 24 inches in height.

Temperamentally, the sexes are a lot more similar, especially if the male has been neutered. Some Griff owners say that females are more mischievous, but the evidence for that is mostly anecdotal.

While it’s clearly true that Wirehaired Pointing Griffons are one of the best hunting breeds in the world, it would be a mistake to pigeonhole them as nothing but gun dogs. It’s probably more accurate to call them explorers. Griffs love nothing more than traversing a new landscape, solving a new puzzle, or making a new friend.

This isn’t a toy breed or a couch potato. Be prepared to work harder than you have with any dog before. The great thing about Wirehaired Pointing Griffons, though, is that their love always reminds you why you’re putting the work in.

Top 10 Most Loyal Dog Breeds in the World