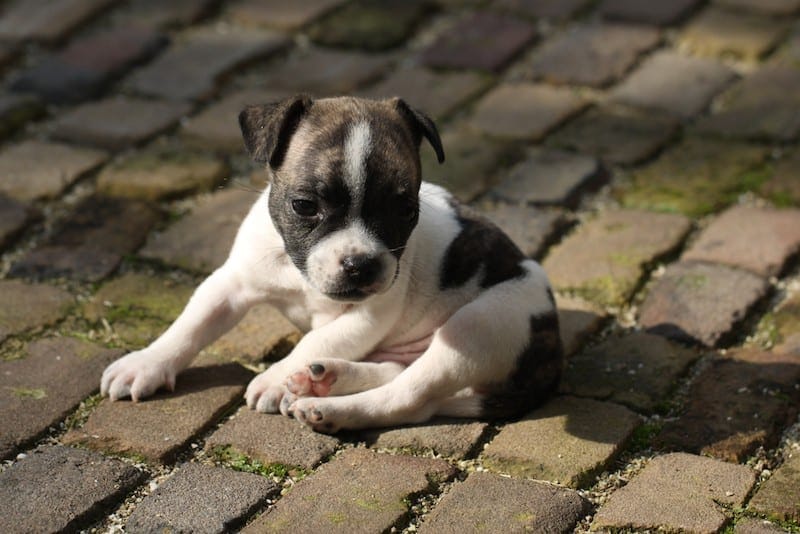 The American Bullhuahua is an interesting mix that results in a diverse array of appearances. This breed is a cross between a Mexican Chihuahua and an American Bulldog; two dogs with drastically different looks and demeanors. Chihuahuas are tiny dogs that weigh six pounds or less and stand a mere eight inches tall at the most. American Bulldogs, on the other hand, are sizable beasts that can weigh as much as 100 pounds and stand more than two feet tall at the shoulders.

As you can imagine, with two dogs that are so dissimilar, it can be hard to predict what the offspring will look like. Generally, they’re much larger than Chihuahuas, though clearly much smaller than Bulldogs. They tend to have muscular bodies that are lean and slender instead of bulky.

The attitude of an American Bullhuahua leans toward being friendly and full of energy. Often, they’re less yappy than a true Chihuahua, though they have a bit of that same bravado. These dogs are social animals that want to be part of everything your family does. They’re not the kind of breed that does well when left at home alone for long periods.

American Bullhuahua Puppies – Before You Get One…

This is much easier than working with purebred Bulldogs and Chihuahuas because of the huge size difference between these breeds. But it also helps to establish breed standards concerning the dog’s appearance, size, colorations, and more.

There isn’t a question about it; Bullhuahuas are social animals. They love attention and they want to be a part of everything you do. These dogs are incredibly friendly and loving; the perfect temperament for a companion pet.

But things are a bit different when it comes to strangers. Chihuahuas are known to be watchful and wary of strangers, and these traits show through in the Bullhuahua. But because of this, they do make great watchdogs.

As mentioned, Bullhuahuas are social canines. They want to be part of all family activities. This makes these dogs ideal for people who love to bring their pets along with them wherever they go. But for families who tend to leave the pets behind most of the time, a Bullhuahua may not be a great fit. They hate being left alone and can quickly turn towards destructive behaviors if left on their own too often.

Temperament & Intelligence of the American Bullhuahua 🧠

For the most part, the American Bulldog Chihuahua mix are very friendly, social dogs. They want to be friends with everyone they’re comfortable with, but strangers might take a while to warm up to.

These dogs are also very bright. They can learn things quickly, though there’s a notable stubborn side to this breed that you’ll need to work through. Luckily, they’re people pleasers and they don’t want to disappoint you.

You’ll find that they have a lot of that Chihuahua charisma and bravado, though much of it is tempered by the Bulldog friendliness that the breed got as well. They’re generally sweet dogs that can become yappy and aggressive if they feel even a little threatened.

Because this breed needs so much attention, they’re a great fit for families. Bullhuahuas can bond with every family member, which means that everyone can help provide the attention that your Bullhuahua wants. This ensures that your dog stays happy and healthy. Remember, Bullhuahuas hate being left alone. Families can often leave one person at home to be with the dog if they can’t take them along, which is ideal with this type of breed.

Things to Know When Owning an American Bullhuahua:

Bullhuahuas are medium-sized dogs with moderate levels of energy. They do best on a high-quality dry dog food that’s suited for their current life stage. So, puppies will do best on puppy food and a senior recipe is better for aging Bullhuahuas.

It’s important that you pay attention to how much you’re feeding a Bullhuahua. Many of these dogs are prone to overeating. So, if you provide too much food for your Bullhuhua, they’ll likely start gaining weight pretty quickly.

To help combat this, it’s recommended that you don’t leave food out for your Bullhuahua all day. Rather, you should designate two or three each day when you put food out, measuring how much you’re offering each time to ensure you’re not overfeeding.

Chihuahuas are bursting with energy so you might expect the Bullhuahua to be a highly-energetic breed as well. But the Bulldog in their genes tempers this a bit since Bullhuahuas only need a moderate amount of physical activity to stay healthy and happy.

Twenty to thirty minutes of moderate exercise each day should be plenty for a Bullhuahua. This can range from short walks to active games like fetch and tug-of-war. Devote less time than this to your dog’s exercise and you’re likely to see the signs of boredom start to show, and a mischievous dog is soon to follow.

Bullhuahuas are intelligent animals. That doesn’t mean they’re going to be easy to train though. Unfortunately, they can be quite difficult to train since they tend to be quite stubborn. This is a trait passed down from the Bulldog side of the family. Because of this, Bullhuahuas are best left to someone with previous training experience. They’re generally not considered to be the best option for first-time dog owners.

Both Chihuahuas and Bulldogs have short coats that don’t need a lot of maintenance and the Bullhuahua is no different. This breed sheds a moderate amount though, so you’ll need to give them a good brushing at least once or twice each week to remove all the dead hair. These dogs need more bathing than other breeds, so anytime they start to stink, it’s a good time to get them clean.

Make sure to keep an eye on your dog’s teeth, brushing them at least once a week. These dogs are susceptible to dental disease, which proper dental hygiene can help to prevent.

One reason for mixing breeds is that purebred dogs tend to have many health concerns that they’re likely to develop. By crossing the breed with another breed that’s not as vulnerable to the same health concerns, you can create offspring that is less likely to deal with health problems. Still, there are a few things to watch out for if you’re going to have a Bullhuahua.

The American Bullhuahua is an interesting breed that mixes the best traits of two highly popular dog breeds. These dogs are very friendly and loving with their family who they want to be with all the time. They hate being left alone, so if your dog is going to spend a lot of time at home without you, then this breed won’t be a good fit.

Though they’re affectionate and close with family members, Bullhuahuas are naturally wary of strangers. This keeps them watchful and alert; great traits for a watchdog. They’re smart dogs that can grasp training concepts, but they’re also very stubborn, so getting them to listen takes some patience and a firm hand. They’re not the best choice for first-time dog owners. But if you have the time and patience to train your Bullhuahua, it can make an excellent companion pet that will always be by your side.