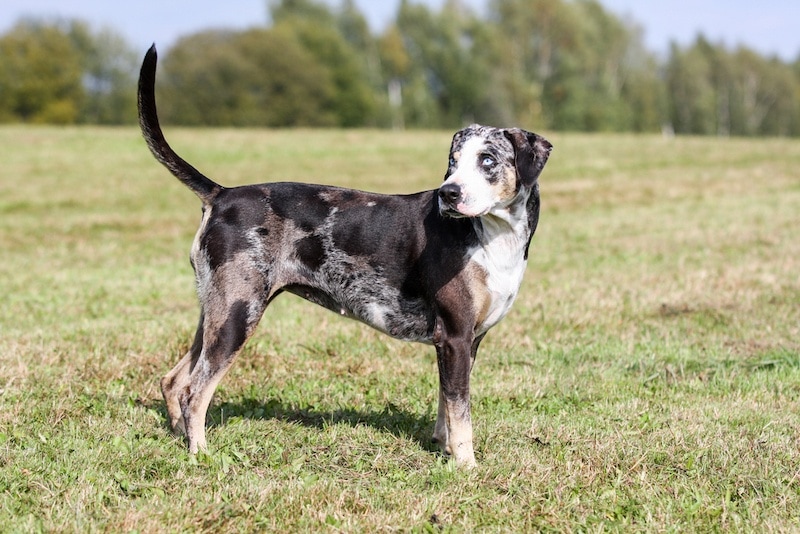 As smart as a Border Collie, as skilled as a Bloodhound, and twice as sweet as either — the American Leopard Hound makes a wonderful companion for active families with the space to let them roam!

The American Leopard Hound was likely developed by mixing native Mexican dogs with canines brought by Spanish Conquistadors. Later, these dogs came to the Southern United States and were mixed with herding dogs and hounds from France, England, Ireland, and Scotland.

The true American Leopard Hound was established in the 18th century in North Carolina. From there, these adaptable hounds made their way to Kentucky and Tennessee, then Oklahoma and Texas. They are a rare breed, and never became popular outside of the Southern United States.

They are some of the best and oldest of the treeing hounds — dogs that track game, chase it up a tree, and keep it there until their hunter arrives. American Leopard Hounds are still used today to hunt bear, cougar, bobcat, raccoon, squirrel, and many other tree-climbing game.

American Leopard Hound Puppies – Before You Welcome One Into Your Family…

Bright-eyed, sweet-faced, and floppy-eared, the sturdy American Leopard Hound is one of the best friends a hunter or adventurous kid could ask for. They make excellent work dogs, as they are eager to please and hardworking, but also great companions due to their watchful and friendly nature.

Though a little wary of strangers at first, once you make friends with an American Leopard Hound you’ll have one of the most dependable friends you could ever ask for! They usually live into their mid-teens and are a rugged, hardy breed.

These dogs are medium-large in size and need quite a bit of outdoor space to flourish. A versatile and tough breed, American Leopard Hounds can acclimate to both temperature extremes.

The American Leopard Hound is one of the best hounds for scent work and tracking. They are equally adept at picking up recent trails and cold tracks.

With their keen noses and endurance, American Leopard Hounds can follow the trail of prey for miles.

In addition to their exceptional skill at sniffing out and tracking game, the American Leopard Hound is also great in a fight. They can corner dangerous animals and hold them while their hunter gets close.

These agile dogs have the ability to duck, dodge, and weave while staying in close with their quarry, avoiding injury and keeping boars, bears, and cougars from escaping.

These capable hounds are not only excellent at treeing and holding prey, but they can climb up after game when necessary.

American Leopard Hounds have large, round, cat-like paws. These tough paws, their strong hind and forelimbs, and their large tails that can help them balance all mean that these dogs can climb trees nearly as well as any cat. Now that’s talent!

The American Leopard Hound is a tough and tenacious hunter when in the field, and a calm family companion in the home. Children are favorite companions of this sweet hound.

Though friendly and affectionate with the family, a Leopard Hound may be cautious of strangers due to their intensely protective nature.

Commonly known as the smartest, most trainable of the hounds, the American Leopard Hound has a keen intelligence and deep desire to please its owner. An energetic, athletic creature, this dog takes well to any work it can do in concert with its owner and loves playing games with the family.

Though tough and determined when working, American Leopard Hounds are loyal and affectionate family dogs. They especially get along with children and are extremely protective of their kin.

It is advisable to socialize your American Leopard Hound with children and adults early and often. While highly social, their protective nature can become overbearing if they are not taught how and when it is appropriate to be on the defensive.

American Leopard Hounds are sometimes kept as part of a hunting pack, and as such, usually get along easily with other dogs. Leopard Hounds can have this same ease with cats, but it’s a case-by-case situation. Early socialization should help dogs and cats get along and prevent any chasing.

As with any hunting breed, never let your American Leopard Hound have unsupervised time with small pets or prey animals. After all, even the gentlest of play for a dog can be deadly for a rabbit.

Things to Know When Owning an American Leopard Hound

As wonderful as dogs can be, welcoming an active, energetic canine into your family also carries a lot of responsibility.

Here we’ll look at some of the specifics of day-to-day care for the American Leopard Hound. Hopefully, this will give you a better idea of what life with one of these hardworking dogs is like!

Dogs, very much like humans, require a varied diet to get all their necessary nutrients. To make sure your dog is getting a well-balanced meal every day, a high-quality kibble is a great option.

The muscular and athletic American Leopard Hound does especially well with food rich in animal proteins and healthy fats. Fatty acids like omega-3s and 6s are of particular note for their support of joints, eyes, and brain development.

Get some recommendations for brands and portion sizes from your veterinarian. You can even ask which fruits and veggies you can give your pooch as a treat — you may be surprised how much some dogs love carrots!

As a testament to their hunting heritage, the American Leopard Hound is a highly active breed. They need abundant room to roam and exercise, and a large, fenced-in yard or country property is recommended.

Plan on taking your American Leopard Hound outdoors with you often — whether it’s hiking or swimming, hunting, agility training, or even just playing fetch. These dogs love being active with their owner.

The American Leopard Hound’s incredible intelligence and eagerness to please make this diligent canine the easiest to train of all the hounds. They have none of the stubbornness of some hound dogs and deeply enjoy working together with their owners.

Fans and hunters often praise the American Leopard Hound as the most willing and trainable of any dog they have ever owned!

A solid recall is especially important to instill in this scent hound. The American Leopard Hound loves following interesting smells and can easily become distracted and enticed away from home and hearth.

But if you practice calling them back from long and short distances, they’re sure to return with a mischievous doggy grin and a bounce in their step.

American Leopard Hounds have short, dense coats that require little attention to stay sleek and clean. They do not shed much, so occasional brushing and a bath once in a while will do these pups just fine.

Being such energetic dogs, American Leopard Hounds usually wear down their nails naturally and seldom need them trimmed. It’s still a good idea to check them periodically, as overgrown nails can crack and break painfully.

Teeth and ears should be cleaned weekly. Gently swabbing or flushing the ears of excess wax and dirt helps prevent nasty infections, and a regular fang cleaning will keep gums and teeth healthy well into old age.

American Leopard Hounds are exceptionally hardy and healthy dogs. Being rare, however, also means that there may be conditions that they are prone to which breeders are unaware of.

Here are the known health concerns that you should be on the lookout for when getting or caring for an American Leopard Hound.

Female American Leopard Hounds run smaller and tend to be quieter dogs than their male counterparts.

So, is the American Leopard Hound the right dog for you?

If you live in a cramped city or don’t enjoy spending time outdoors, then perhaps you should check out some other breeds.

But those who are seeking a companion for outdoor adventures, and who have the time and space to dedicate to a smart and dedicated dog, you may have found your match in the American Leopard Hound!