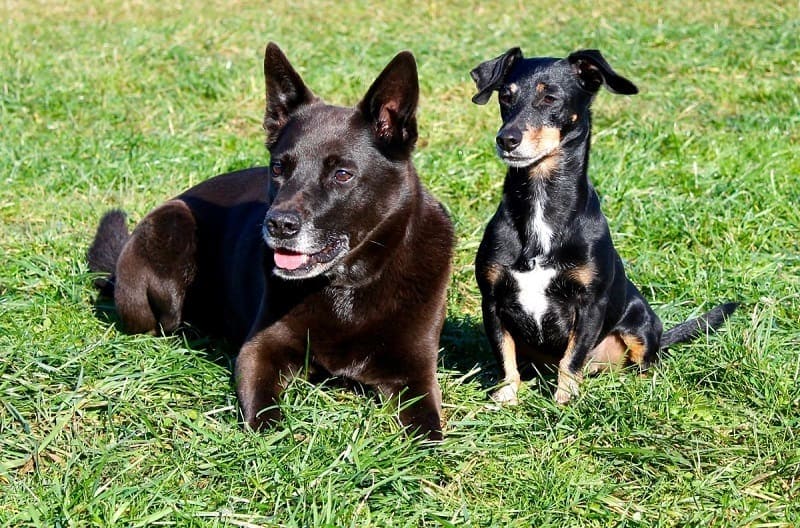 This guy isn’t just any old Kelpie. He is a Working Kelpie. Not just a Kelpie that works, but a distinctly different breed altogether…kind of! Sure, that sounds confusing, but here in this guide, we’ll explain all and more.

The Working Kelpie is an incredibly hardworking dog, and one of the most energetic dog breeds on the planet. This means that he isn’t suited to a typical family, or most families, in fact. Instead, he needs to be placed with a family that will work him on a ranch or one that can commit to at least 90 to 120 minutes of intense exercise every day.

If you’re thinking about welcoming this guy into your life, there are a few things that you need to know before you commit to him. This makes this breed guide a must-read.

So, without any further ado, let us introduce you to the Working Kelpie.

Working Kelpie Puppies – Before You Buy…

Okay, so before we continue, we need to clear up what makes them different from an Australian Kelpie. Well, they are both the same breed, a Kelpie. The Kelpie dog has always been a hardworking ranch hand, and one with incredible intelligence, stamina, and desire to work.

But because we humans love dogs so much, we have taken dog breeds and domesticated them. And this is the same with the Kelpie. Over time, some Kelpies have become accustomed to family life and bred to conform to breed standards over the importance of their work ethic. Of course, they are still energetic, but not all are as hardworking as their ancestors were.

Working Kelpies are true to their original purpose. They are not bred to conform to breed standards, and they do not have the time for dog shows. Instead, they are bred for their ability and worked hard as they should be.

This means that they should only be adopted by families who intend to work them. If you are looking for a family Kelpie, we would suggest choosing an Australian Kelpie over this guy. Unless, of course, you can commit to exercising them for hours on end every day. If you can, they do make lovely family pets.

The price of a Working Kelpie puppy will start from approximately $1,000. There isn’t a lot of information available online, as many reputable breeders will not disclose the prices of their pups. Working Kelpies are not ideal for typical families, and only serious ranchers will reach out to purchase a pup.

1. The Working Kelpie has a unique herding technique

Also known as backing, the Working Kelpie runs across the backs of sheep to herd them to wherever he wants to go. Unlike many herding breeds who nip or stare to herd, this guy just jumps straight onto them. You need to see his backing technique in action to believe it!

If the Working Shelpie is struggling to see across the field, he will stand up on his rear legs to see what is going on.

3. The Working Kelpie is technically a Scottish breed

It is believed that the two foundation dogs for this breed were Scottish Colies. They were imported into Australia from Scotland, where the breed was standardized. Hence, they are called Australian Kelpies.

Temperament & Intelligence of the Working Kelpie

Aside from his intense energy and work drive, he is a loving dog with many other desirable canine characteristics. He is sweet with his family, and he will love to spend time with you in the evening rather than on his own. He has worked hard for his master all day, and he knows that he deserves a cuddle or three in front of the fire.

He does not extend this sweetness to strangers, though. Instead, he makes a fantastic guard dog who is very aloof with strangers. This is great if you are looking for a family protector, not so much if you have friends over all the time. He will bark whenever anyone new comes onto his property, and he will jump into action if he feels that his family is in danger.

Yes, as long as he is socialized well, and you don’t have pet sheep or cows, this guy gets along well with other household pets. He may try to herd them, though, and this behavior should not be tolerated. Not only is it annoying in the home, but it can also lead to pet squabbles.

Things to Know When Owning a Working Kelpie:

Now you know about the Working Kelpie and his personality, intelligence, and suitability as a family pet, here are his daily needs.

The Working Kelpie needs plenty of energy to keep him sustained throughout the day. He will typically eat between two to three cups of food every day. His diet should be well-balanced, but it needs to have a high protein, fat, and energy content.

Many brands produce a working dog food product, sometimes labeled as performance food, so be sure to feed him this. They will have optimum protein to fat ratios and plenty of energy to keep him sustained throughout the day.

Cheap budget store brands will not cut it for the Working Kelpie, so you’ll need to invest in a high-quality food brand for this guy. They will not contain the fuel or nutrients to fuel his day and instead uses cheap fillers.

It goes without saying that the Working Kelpie is an energetic dog breed who needs at least 90 to 120 minutes of intense exercise every day. Come rain or shine without fail, this dog needs an energy outlet. Otherwise, he will become depressed and problematic.

If you can’t work him, his exercise needs to be extreme. A long walk will not do for the Working Kelpie. He makes a great jogging partner or adventurous mountain explorer, and be sure to mix it up to prevent him from becoming bored.

The Working Kelpie does not see his master as his master. Instead, he sees him as his colleague, who work together to control the flocks on the ranch. This means that he is not the most obedient of dogs outside of the working environment. He shouldn’t challenge his master for the top dog position in the family pack. But equally, he will not obey your every command outside of work.

This guy is not for an inexperienced dog owner. He needs a master who has had several years of experience with working dogs and thinks they are ready to step up to the canine challenge that is the Working Kelpie. His master needs to be firm and fair.

Just like all dogs, he should be socialized well as a pup for him to grow into a polite pooch. But this socialization is a lifelong commitment. For him to remember his polite doggy etiquette, you will need to socialize him with other dogs, animals, and humans regularly.

Because he is a herding dog, he might try to herd the younger members of the family inside the home. This should not be tolerated. He is unlikely to back them like he does the sheep, but it will be frustrating for younger children. If he starts to exhibit this behavior, it is likely that he is bored and not being exercised or worked enough.

The Working Kelpie has a relatively simple grooming regime, and his coat is smooth, short, and double-layered. He sheds relatively low all year round and moderately during the shedding season. Use a brush once a week to remove the dust and dirt he has picked up on the ranch, and this will suffice to keep him looking his best.

A bath once every 8 to 12 weeks will also be enough to keep his coat clean. Despite being on the ranch all day long, he is a relatively clean dog. His other grooming needs, such as ear cleaning and dental brushing, are the same as any other canine, which is once every week or so.

The difference between male and female Kelpies is negligible. Their upbringing, training, and the right family environment are more influential on his personality than his gender. This is why you should always work with a reputable breeder.

Overall, its safe to say that the Working Kelpie is not ideal for the average family. Not only is he extraordinarily energetic and intense, but he is too much dog for some people. He demands constant interaction and activity that most people haven’t got the energy or time for him.

If you can work him, he makes a great family pet. He will cuddle up to you and the rest of your family, and smother you in doggy kisses and cuddles. He will also protect you and alert you to anyone that shouldn’t be there. He is excellent with children and other pets, just as long as you keep his herding behaviors in check.

If you are looking for a family pet but set on a Kelpie, we recommend picking an Australian Kelpie over a Working Kelpie. But the Australian Kelpie is still up there on the energy scale. Ultimately, if you think that you tick all of his boxes, he will be sure to tick yours too.