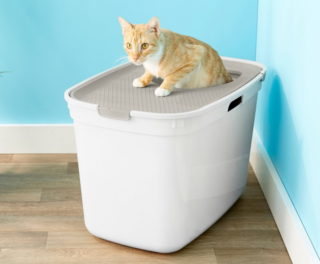 Unless you have the patience and persistence to teach your cat to use the toilet, there’s no way to avoid keeping litter boxes in your house—unless your cat goes outside (which you should avoid!). Cat owners accept the presence of litter boxes just as they tolerate other quirks of cat ownership, like cat hair on their clothing or the occasional love bite.

Just because you keep a litter box in your house doesn’t mean your house has to smell like a cat toilet too. Scooping daily will help control odors, but the type of litter box you use plays a role as well.

To help you keep your home smelling fresh, we’ve collected reviews of the top 10 cat litter boxes for odor control. Check out our list to help you decide which one is best to keep your cat’s odor in the box where it belongs.

A Quick Comparison of Our Favorites 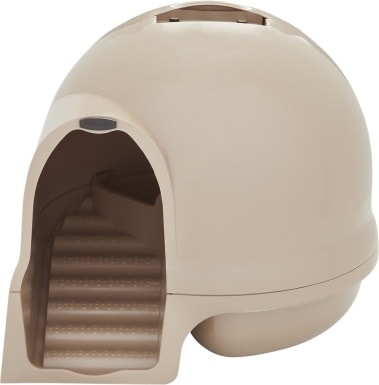 Our choice for the best overall cat litter box for odor control is the Booda Dome Cleanstep litter box. The design of this litter box is unlike any other. For controlling odors, this box relies on its unique shape to help contain smells and a filter to trap any scents that try to escape. The Booda Dome is large enough for most sizes of cats. What makes it the top choice for us is the easy entry thanks to the enclosed stairs. Tiny kittens and senior cats with stiff joints often have trouble climbing in and out of traditional litter boxes. This box solves that problem, which means it also solves the issue of the old and young cats eliminating outside the box because they can’t get in! The major complaint about this box seems to be that urine can build up and eventually leak out of the seam between top and bottom. However, this appeared to be an issue with all the covered litter boxes we reviewed if used by cats who are higher sprayers or urinate standing up. If your cat falls into that category, be aware that this could become an issue. 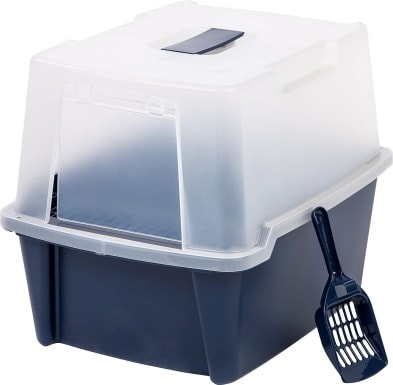 Our choice for the best litter box for odor control for the money is the Iris Large Hooded Litter Box. Covered litter boxes are usually the most effective at controlling litter box smell, and this is one of the most affordable covered options. The hinged door also works to keep odor within the box, although many owners end up removing it either because their cats dislike it or it falls off too often. The semi-see-through cover is nice for cats who might be wary of fully covered litter boxes. This box reportedly has some durability issues, and some owners find it tough to clean due to the way the floor is designed. Nonetheless, this litter box offers good value for odor control. 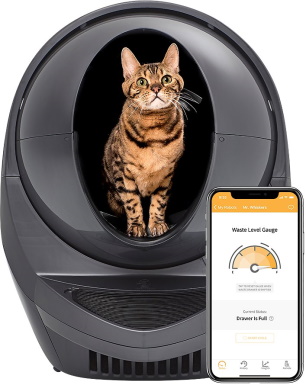 For a litter box that truly does all the work for you, consider the Whisker Litter-Robot. This fully automatic litter box cleans itself as soon as your cat finishes up their business. For odor control, the waste drawer is lined with a carbon odor filter. The automatic scooping is designed to reduce litter waste and save money, although it would need to save a lot of litter to make up for the cost of the Whisker Litter-Robot. Price is definitely the major drawback of this litter box. Some cats may have trouble climbing into this taller box. The company sells a matching step to solve this problem, although that’s another expense to factor in. 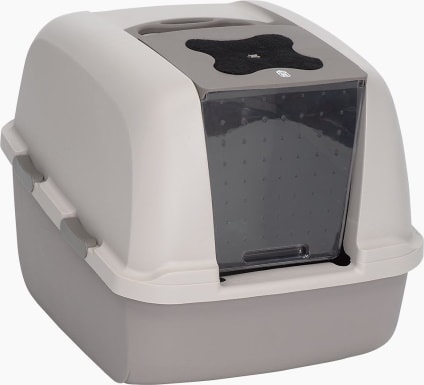 This litter box is a good choice for large cats or multi-cat households. The large size allows the cat plenty of room to move and this box gets high marks for odor control, with or without the door. The cover of this box latches to the bottom, but some owners still report issues with urine leaking if their cats spray higher up the walls. This box is easy to clean even with its large size thanks to the removable hood and non-textured walls. Reportedly, the door has some quirks, and many owners chose to remove it entirely. The carbon filter does need to be replaced regularly to maintain peak odor control. 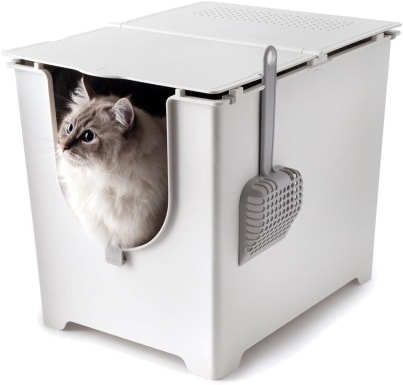 The unique design of this box works to keep odors contained as well as contain the spraying of those cats who like to urinate up the walls of their litter boxes. Two distinct features of this box are the reusable liner, which is meant to help keep urine from leaking out, and the flip lid. The lid makes the box a breeze to access for cleaning. It also allows you to give your cat a little more space if they aren’t sure about using a fully covered box. This box may be too short for large cats, and the liner reportedly has some durability issues. 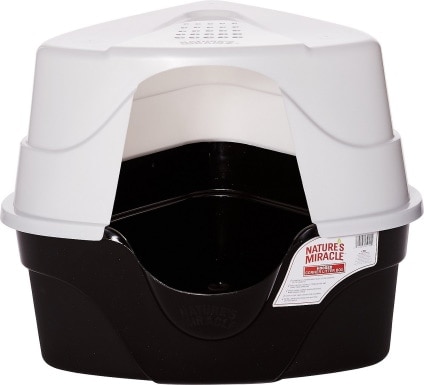 This litter box is both very large and also designed to take up less space by fitting in the corner of a room. It comes with a carbon filter that supposedly works for 3 months, although that doesn’t always seem to be the case. The sides seem to be high enough to contain most urine, but high spraying cats may still cause urine leaking. This litter box is a good choice for multiple cat households as well due to its roomy size. Some durability issues are reported over time with this litter box. Make sure you check the dimensions of the space you’re placing this box before buying as it is quite bulky. 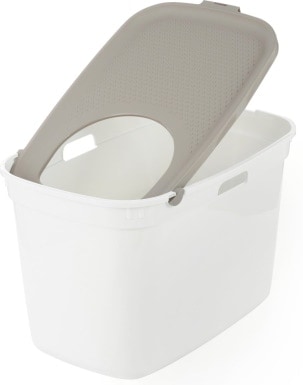 Top entry litter boxes don’t appeal to every cat, but if yours can be coaxed or conned into using one, you can consider this Frisco Top Entry litter box for odor control. This box excels at containing urine and litter messes along with odor since the sides are completely enclosed. If you have a dog in the house who enjoys raiding the litter box, the design of this litter box may make it harder for them. Large cats may have a more difficult time using this box, although some clever cats figure out that they can perch above the hole and do their business. The texture of this box reportedly causes some issues with cleaning. 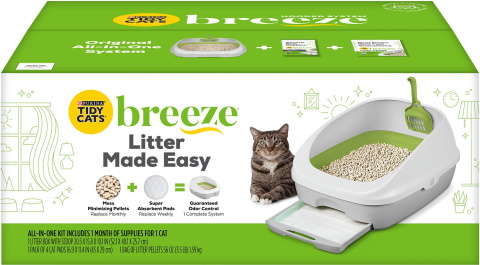 The Tidy Cats Breeze Litter System is designed specifically to reduce litter box odor. It uses a special type of litter that doesn’t absorb the urine but lets it pass through to be absorbed by pads in a drawer below. While solid waste still needs to be scooped, urine and urine odor stay contained by the pads until the drawer is emptied every 7 days. The special pellet litter is also supposed to reduce litter mess and tracking. This box is too small for large cats, and some owners report issues with the pellet litter not working as intended. Kittens may mistake the litter pellets for food and attempt to eat them, so be aware of this if you choose this litter box. 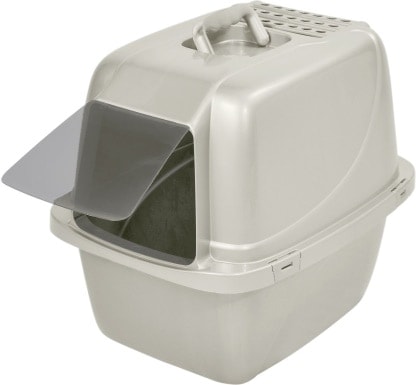 The Van Ness Enclosed Cat pan is a no-frills, enclosed cat litter box made partly of recycled materials. It relies on a removable cat door and a replaceable filter to help control odor. This box works for most large cats and the filter reportedly works as it’s intended to help eliminate smells. Some long-time users of this litter box brand report that they find the newer versions of the box aren’t as durable as old boxes they’ve had previously. If your cat is a high sprayer, you may notice urine leakage with this box like other covered options. The door flap often falls off and many owners just opt to remove it. 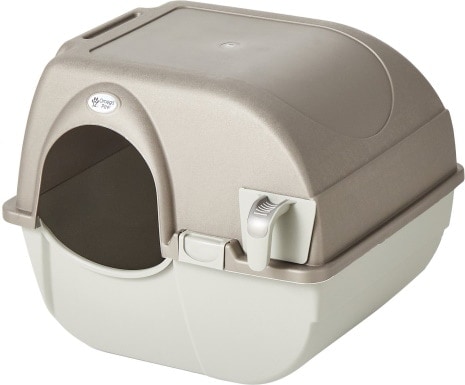 If you like the idea of a self-cleaning litter box, but don’t have the cash to throw at the Whisker Robot, the Omega Paw RollNClean might be the choice for you. This litter box relies on a special grill inside the box to trap the litter waste. To clean the box, you roll it to allow the clumped litter to fall to a pull-out waste tray for disposal. The enclosed box works to keep odors and litter dust contained, even during rolling. These litter boxes work most effectively with clumping litter. They’re a bit small for large cats and seem to be hit or miss when it comes to how well the self-cleaning actually works.

As you can see, you have numerous things to consider when deciding on the best odor control litter box for you and your cats. The strongest choices usually have multiple strategies for containing odor, such as a filter and a covered box with a door flap.

You also want to look for a box that’s user-friendly for your cat. Stress surrounding litter box use can lead to several medical and behavioral problems you’d rather avoid. All the research and reading of reviews in the world won’t matter if your cat hates their new litter box.

Some specific points to compare when you are choosing the odor control litter box that works best for you are the following:

Number Of Cats In The House

Veterinarians and cat behaviorists recommend that you keep one more litter box in the house than the number of cats who live there. The best litter boxes for odor control aren’t necessarily going to be the cheapest options. If you need to purchase multiple litter boxes, which box best fits into your budget?

Age And Size Of Your Cats

Older cats and kittens may have a hard time climbing into some litter boxes with higher sides. If you have a cat of this age, consider a litter box with a step or a lower front entrance side.

Placement Of The Litter Box

Let’s face it, litter boxes aren’t exactly going to win any style points from home designers. Often you can tuck one in an out-of-the-way room, but this gets trickier if you live in a small space or have multiple cats.

Some odor control boxes are designed to either take up less space or look cool enough that you don’t care if it’s in the corner of your living room. When deciding on a litter box, consider where it will live in your house.

If your first childhood chore was scooping the cat box at 5 years old and now you’re an adult and still doing it every day, the temptation to buy a self-cleaning litter box is understandably high. The price of convenience is high, and you’ll need to decide if you can afford it and whether it’s worth it even if you can.

Our choice for the best overall litter box for odor control, the Booda Dome CleanStep combines odor control and easy accessibility, making it suitable for all ages of cats. Our best value choice, the Iris Large Hooded litter box provides odor control at an affordable price.

Keeping your home free of cat odor is a full-time job (unless you go with our premium choice, the Whisker Litter-Robot!) but one that can be made simpler by choosing the right litter box. Hopefully, these reviews gave you an idea of what odor control litter box will work best for you and your cat. 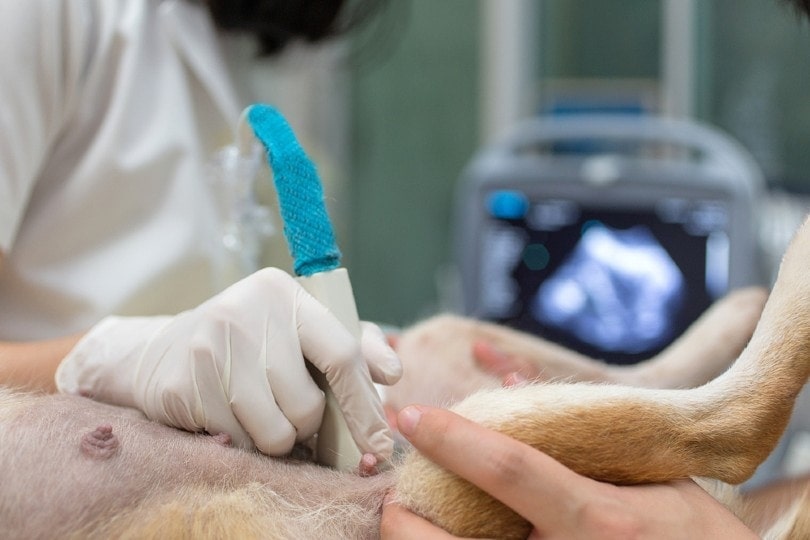 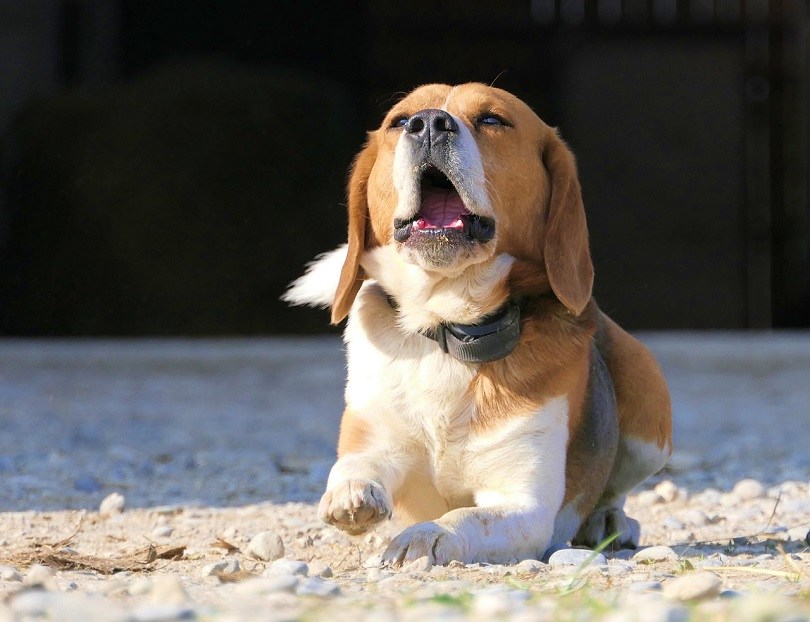 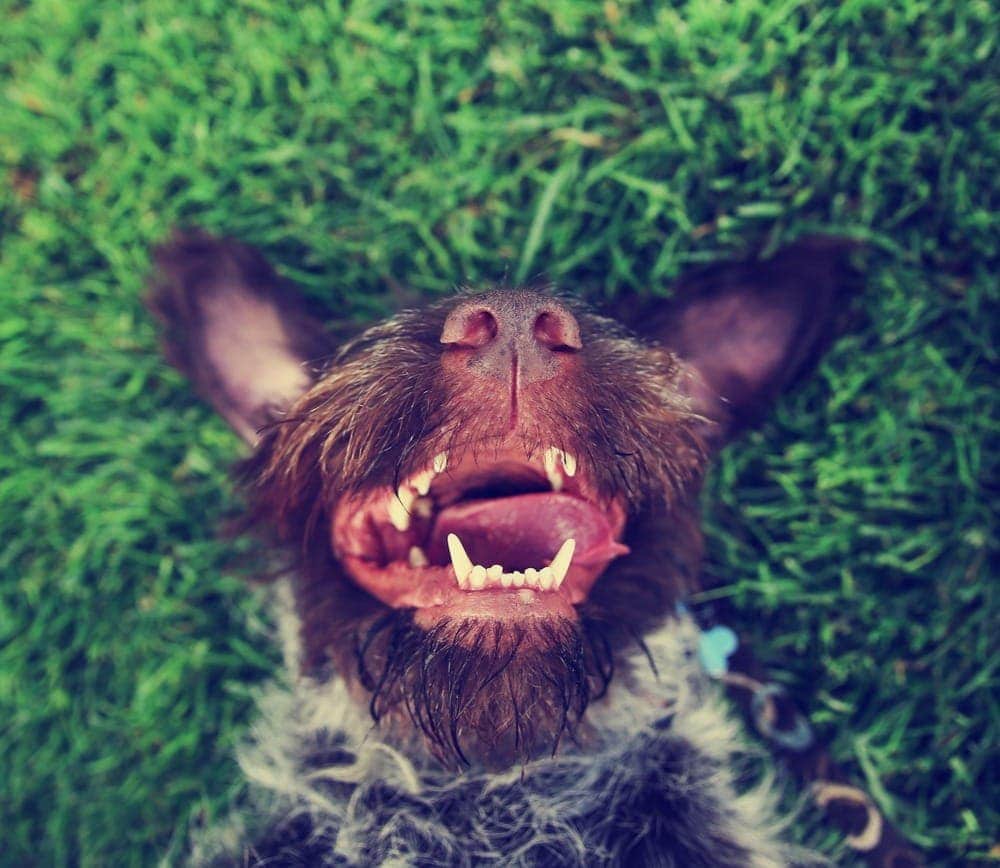 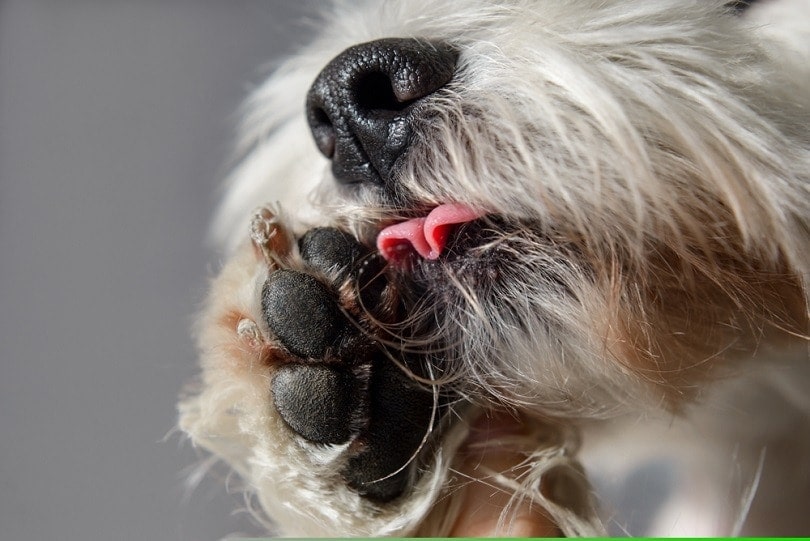 Why Does My Dog Chew His Paws & What to Do? (Dog Behavior Explained)