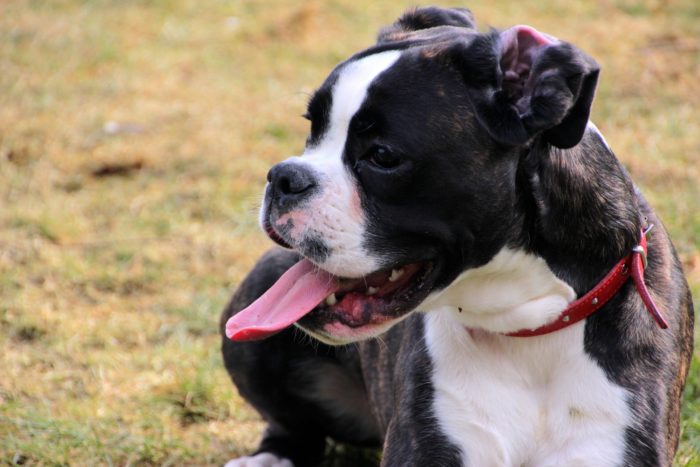 The Boston Boxer is a mixed breed created by mixing the Boston Terrier with a Boxer. The result is a small-sized dog that retains the look of the Boxer in a smaller package. It’s well suited to cramped apartment life and is friendly enough to have around children.

It has muscular proportions like the standard Boxer and wide eyes. It has wrinkles on its forehead and regular-sized ears. The ears are floppy but will stand at attention if excited. It has arched paws good for speed and is a remnant of its ancestral hunting days. The American Kennel Club does not recognize Boston Boxers because they are a mixed breed, but they are extremely popular among pet owners across the globe.

Boston Boxer Puppies – Before You Get One…

1. The Boston Boxer is part Bulldog as the Boston Terrier is a mix between the Bulldog and the extinct English Terrier.

2. The Boston Boxers Ancestors go back to the Assyrian Empire of 2500 BC.

3. No one knows precisely when Boston Boxers originated, and it could have been at any point over many decades

Temperament & Intelligence of the Boston Boxer 🧠

The Boston Boxer loves to play and is very energetic. They are athletic and can run fast and jump quite high and will maintain a fast pace for extended play sessions before tiring. They quickly become attached and protective of their owners and are wary of strangers who might cause them to become aggressive and bark. However, they generally get along with other household pets and small yard animals like bunnies and squirrels.

Boston Boxers are sensitive to their environment and prefer a set, predictable schedule, and they can be stubborn if you change things up too quickly. They are very intelligent and easy to train, as long as they think they are in charge. They love the company and will remain at your side most of the day.

Boston Boxers are perfect family pets. They are very friendly, energetic, and playful. They get along well with pets including, cats and other dogs. They like to play with children and will provide each other with unlimited amounts of entertainment. Boston Boxers are intelligent enough to follow orders and behave and will even learn tricks and guard the house while you are away.

They will require at least one family member to take them out for long walks, though, and these are high maintenance in the exercise department, requiring at least one hour of running and jumping each day. If you live in the city, it can be challenging to find enough room, and you will likely require access to a park or trail.

Boston boxers are extremely friendly and get along with almost all other pets. They are even more friendly if you socialize them early and get them used to other animals, but even so, this breed rarely gets aggressive toward another animal.

Sometimes they can get a little barky on a walk if they encounter another animal because Boston Boxers are protective of their master, but they are not noisy to have in the yard and don’t tend to chase rabbits or squirrels.

Things to Know When Owning a Boston Boxer

Let’s look at some of the daily requirements of the Boston Boxer to see if you’re up to the task of caring for one.

An average-sized adult Boston Boxer requires about three cups of food per day. This food should be high-quality without any harmful chemicals or preservatives. High-quality dog food will contain meat, vegetables, grains, and fruits, according to the American Kennel Club.

Boston Boxers are extremely energetic dogs and require plenty of activity to stay happy and healthy. You can expect to take your Boston Boxer for a long walk every day, and on some days, you may need a second walk. If you live in an apartment building or a busy city, it’s important to know where you can walk your dog before you purchase one. It’s also important to consider if a dog that requires this much exercise is right for you. You can expect to walk at least eight miles a week spread out over about an hour a day, every day, for the next several years when purchasing a Boston Boxer.

Boston Boxers are indeed intelligent enough to train to do tricks or follow commands. In most cases, you will only require patience and a bunch of treats to have your Boston Boxer impressing your friends.

Using the above system, you can teach your dog plenty of tricks, like shaking hands, fetch, rollover, and plenty of others. You can even teach them more complex tricks like retrieving the newspaper with a little practice.

Boston Boxers have medium length hair that is very thick. Luckily, the hair is straight, so it doesn’t require as much maintenance as a dog with curly hair might. They also don’t shed that much so they are perfect for pet owners with little experience maintaining a coat. They only require occasional brushing and trimming of their nails.

If they get into something or begin to smell bad, you can bath them, otherwise, it’s better to let their natural oils keep their coat healthy and shiny.

Boston Boxers are a generally healthy breed of dog that can live long lives without many trips to the vet. But there are a few problems associated with them that you should know about before you make a purchase.

Here are a few of the most serious problems associated with the Boston Boxer.

Heart murmurs can range in severity and danger presented to your pet. Many murmurs are not life-threatening, but any problem, no matter how slight, is cause for concern, and some heart murmurs are dangerous.

Hypothyroidism is a more serious issue that your Boston Boxer may suffer from, and this illness can cause hair loss, flakey skin, weight gain, muscle loss, a slowed heartbeat, and more. Once diagnosed, Hypothyroidism isn’t too hard to correct and only requires some medication.

There are several causes of cataracts, including old age and injury. Genetics is the largest cause, and Boston Terriers have the gene that causes it, and they have transferred it to Boston Boxers. You can notice cataracts in your pet because a film will form over the eye. This film can make It hard for your pet to see and can even lead to blindness. Cataracts can also lead to more serious and permanent eye issues like glaucoma.

Here are a few less common or less severe health problems your Boston Boxer might experience.

Just as with many humans, Boston Boxers tend to experience arthritis later in life due to their high activity levels throughout their life, though it can occasionally creep in at a younger age. Arthritis causes inflammation and swelling around the joints and can be quite painful for your pet. Symptoms include lethargy, whimpering in pain, and aggressiveness.

Another minor but potentially dangerous health problem that your Boston Boxer might experience is an ear infection. Bacteria or fungus are the usual causes of ear infections, and it’s often easy to treat. The problem occurs if let go too long, and your pet has time to scratch it enough to lead to other issues.

Male Boston Boxers tend to stand slightly taller than their female counterparts and are usually five to ten pounds heavier, but it’s pretty close. The females face is slightly rounder with smoother features than the males, and their busy nature makes them a little harder to train. The females also tend to be a little more chatty and aggressive than the males who tend to be more protective and relaxed.

Both males and females tend to avoid hot weather.

We hope that you have enjoyed reading over our in-depth look at the Boston Boxer. This interesting breed has a lot of great qualities that make it perfect for family life, and it also makes a great companion to someone living alone. We don’t recommend it for older people or someone who has a hard time getting around, because these dogs require a lot of exercise to stay healthy. If we have convinced you to purchase one f these dogs, we recommend doing research and checking out as many online breeders as you can find before spending any money to ensure you get the best puppy or the lowest price.