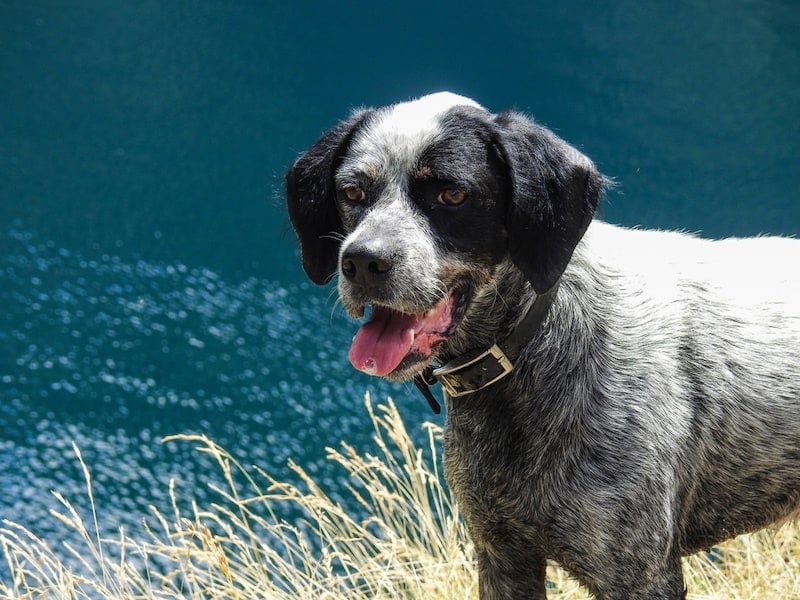 Boxapoint pups are a relatively new hybrid, a cross between two medium-sized and well-known dogs, the Boxer and the German Shorthaired Pointer. These are two hard-working breeds that have a strong work ethic and a great deal of energy.

A Boxapoint pup is considered a higher maintenance breed due to their exercise needs. If you are interested in getting one, be sure to thoroughly read about them to ensure that you can provide them the best home possible.

Boxapoint Puppies — Before You Buy

What’s the Price of Boxapoint Puppies?

Boxapoint puppies are difficult dogs to track down. They are not a common breed and haven’t had a distinct popularity surge at any point. Thus, many dog breeders have not branched out to raise these pups.

If you do find a mix of a Boxer and a German Shorthaired Pointer (GSP), be prepared to hand over the Benjamins. Since both of the parents are popular dogs and the crossbreed is relatively rare, their hybrid mix can be quite costly.

A Boxer pup costs anywhere from $700 to $2,000, depending on the breeder and the pedigree. A German Shorthaired Pointer is even more expensive because they are a coveted hunting dog. Be ready to budget anywhere from $600 to $5,500 for a pup.

The combination of these two can put the price of a Boxapoint somewhere between $400 and $2,000. Although they are not an extremely popular hybrid, it is always worth looking into adoption centers and rescue groups. They will be much less expensive there as well.

3 Little-Known Facts About the Boxapoint

1.  The Boxer gets their name from the way they fight during playtime.

Boxers are one of the more muscular dog breeds with fighting and gruesome entertainment purposes in their past. They have been around for many hundreds of years and adapted for popular sports at multiple different points throughout history.

The Boxer was well-known throughout Europe in the 16th century but was taken in by Germany, where breeders attempted to “perfect” the breed over a couple of hundred years. They were used for bull-baiting and employed as dogfighters until the sports were outlawed.

Due to the aggression and agility bred into them for fighting and baiting, after the sports were made illegal, they were used as hunting dogs. Due to their size, speed, and quick ability to kill, they were mostly used for big game like bears and deer.

Nowadays, the old aggressive breeding has been largely bred out of them, and they are much gentler dogs, although still quite muscular. They are also fearless, making them the perfect option for the police force. Now, they are used as police dogs all over the world.

2.  A Boxapoint has webbed feet.

It is surprising to many people how common it is for a dog to have webbed feet. In fact, this selected trait makes it easier for dogs to swim safely, as well as dig. Boxapoints can inherit the trait for webbed feet from both sides of their family.

All German Pointers have webbed feet and have had for many hundreds of years because they were originally bred to be fantastic hunting dogs for waterfowl. German Shorthaired Pointers are no different.

Purebred Boxers do not typically have webbed feet. It is considered a deformity if they do. However, many breeders have crossbred it into their Boxers. If the Boxer parent has webbed feet, your Boxapoint is guaranteed to as well.

3.  The German Shorthaired Pointer was meant to be the ultimate hunting dog.

As you can likely determine from the name, GSPs originated in Germany. They were bred to be an incredible hunting dog for any number of hunting, retrieving, or gundog scenarios, although they were typically used for hunting waterfowl.

Many believe that this dog was bred with a Hanover Hound and a Spanish Pointer to come up with a dog that had a high capacity to smell, detect, retrieve, and track. Their biggest downfall as hunting dogs was, and still can be, their tendency to bay while they were hunting down the animals.

Temperament & Intelligence of the Boxapoint

A Boxapoint is a sweet dog that likes to be around people. This can make them easier to train, especially if you work on forming a bond with them simultaneously.

These dogs are not aggressive to anything, people, young kids, and even other animals. Watch them carefully as they are being socialized with smaller animals, though, since they do have a relatively high prey drive bred into them, particularly from the German Shorthaired side.

They are smart dogs and therefore, can have a bit of a stubborn streak. They need to know who is boss, and they will be eager to please.

Boxapoints inherit the extreme strength of the jaw from the Boxer. This strength, combined with their alert nature, can make them a good watchdog. They also have a strong work ethic and will be happy to burn their energy off doing something productive.

The Boxapoint makes a wonderful family dog. They have patience and tender hearts. These characteristics make them good with kids, although young kids and any dog breed should always be watched over to protect both of them.

The Boxapoint needs to be socialized— the earlier, the better — to ensure that they will behave well around other animals. Be careful when introducing other animals, especially if it is happening inside their territory. Typically, though, these dogs do well with other animals and do not exhibit aggressive traits.

Things to Know When Owning a Boxapoint

The Boxapoint has a great deal of energy that they need to burn every day, meaning that they go through their food quickly. These are only medium-sized dogs, though, so they aren’t likely to eat you out of house and home.

Boxapoint pups typically consume between 1.5-2.5 cups of food each day. Figuring out exactly how their diet should be laid out should be discussed with your vet, especially if they are not eating consistently.

A Boxapoint also has a possibility of inheriting a beef intolerance from their Boxer parents, so keep an eye out for this if you feed your dog red meats.

A Boxapoint needs high-intensity exercise to keep them calm, content, and healthy. This need for activity can be one of the most stressful aspects of ownership for people who are not ready to take on an active dog.

Since these dogs are so intelligent and agile, there is a large number of different activities you can do with them. Take them for hikes, long runs and walks, swimming, or to the dog park. They can also get agility training to occupy them both mentally and physically. They should get around an hour and a half of activity throughout the day.

You will know if your Boxapoint isn’t getting the amount of exercise they need if they start to exhibit behavioral problems that they haven’t struggled with before. They may start digging or digging more often, chewing, and destroying things.

Boxapoint dogs are smart, and they will test your boundaries when they are first figuring out the routines and requirements from their home. These first few months are crucial, no matter the age at which you adopt the dog. Be firm and consistent with them. They want to know what they should and shouldn’t be doing.

Maintaining their grooming is perhaps one of the easiest parts of caring for this dog. They have short, stiff hair that stays close to their body. Brush them out once or twice a week with a soft bristle brush to reduce the rate they shed.

Avoid bathing them as much as possible, since their skin is sensitive and doesn’t respond well to shampoos. It also strips them of necessary skin oils that help them maintain a healthy coat.

Trim their nails as needed, perhaps less frequently if they are getting plenty of outdoor activity. These dogs tend to have floppy ears and are therefore more prone to getting ear infections. Be sure to clean the ears out with a damp cloth. Brush their teeth at least once a week to maintain good dental hygiene.

Boxers are known to suffer from a variety of different problems. Part of this is because of their anatomy, specifically the way that their faces, mouths, and eyes are shaped. Make sure to keep up regular vet checkups, and check the parents’ health with the breeder before choosing a pup.

There are no recognizable differences between the personalities of male and female Boxapoint pups. Males are larger than females, running from 22 to 25 inches tall and weighing 30 to 50 pounds. The females typically range from 19 to 23 inches and weigh only 25 to 40 pounds.

The German heritage shines through in this generally well-mannered, hard-working dog. All wrapped up in their energetic package is a great deal of sweetness and smarts, making them a good addition to any active family.

These dogs are happiest when they can be useful or get playtime. They make stellar hunting companions and are easy to train once they know their boundaries.