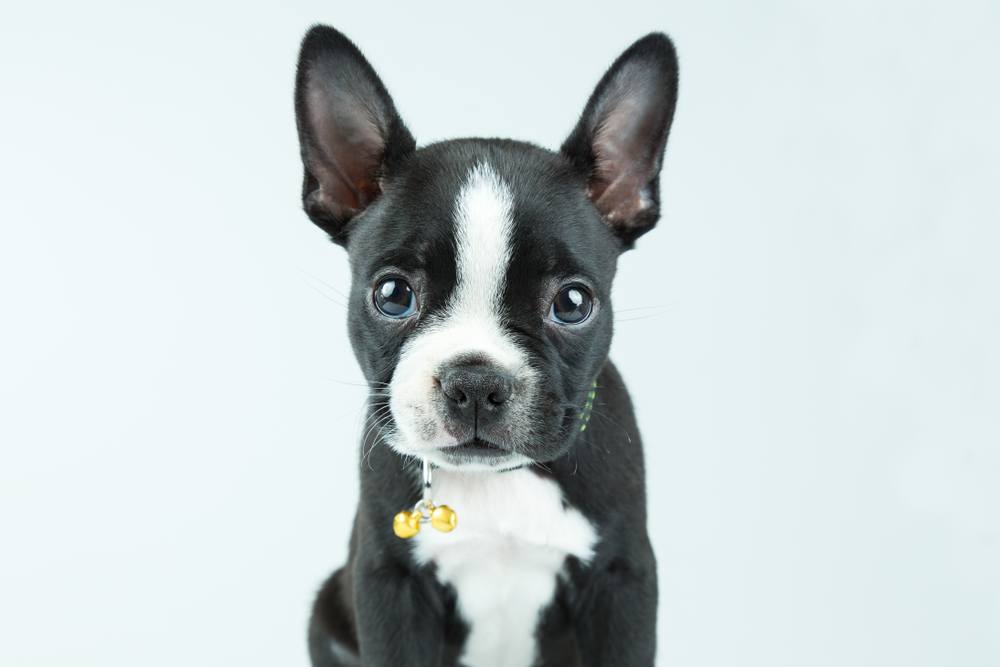 The Boston Huahua is a hybrid or designer breed. He was created by crossing the Boston Terrier with the Chihuahua, and the resulting breed tends to be a loving and playful little companion that will make a great watchdog.

The Boston Terrier, affectionately referred to as the “American Gentleman” thanks to his markings and polite demeanor, is gentle and loving. Although originally bred as a fighting dog, he is now considered a companion dog that is ideal for family life and that will get along with virtually anybody.

The Chihuahua is a small companion dog, originally bred for this very same purpose. While he might be small in size, he has the heart and attitude of a lion. He is friendly and is widely considered one of the best breeds to keep as a watchdog because he is fiercely loyal to his family and also has a slight tendency to vocalize his concerns and worries.

The resulting hybrid, the Boston Huahua, gets the loving nature of both parent breeds, retains his guard dog status, and can adapt to life in almost any size home.

Boston Huahua Puppies – Before You Get One…

1. The Chihuahua is the smallest breed in the world.

The Boston Terrier is hardly a giant dog breed itself, but it dwarfs the Chihuahua, which is recognized as being the smallest dog breed in the world. They usually weigh less than six pounds and only grow to a height of around eight inches at the shoulder.

Their size, coupled with their friendly and loyal nature, has also helped them become one of the most popular breeds in the world. In fact, the smallest dog in the world is a female Chihuahua called Milly. Milly is less than 4 inches tall and lives in Puerto Rico. The last four smallest dogs in the world have all been Chihuahuas.

Sadly, they also hold the grizzly honor of being the second most euthanized breed in the world. Despite having a friendly disposition and requiring minimal care, the popularity of the Chihuahua means that many of this breed end up in shelters, where they are eventually euthanized because they are not rehomed in time.

Today’s Boston Terrier isn’t even recognized as a terrier by the American Kennel Club, instead being classified as a non-working dog. Despite this, he does still retain a reasonably high energy level and might be prone to chasing small animals and vermin.

3. The Boston Huahua is very affectionate.

The Boston Huahua combines two companion breeds. Both the Chihuahua and the Boston Terrier are known for being exceptional companions, are popular with owners of all ages, and the resulting hybrid breed adopts these loving and caring traits from his parent breeds. Unfortunately, the miniature size of the breed means that it is not considered suitable for life with very young children, while families with older children should carefully consider whether theirs is the right environment for this type of dog. The breed is also known for making an excellent guard dog because he will bark to alert his owners of any potential intruders and he is a fiercely loyal companion.

Temperament & Intelligence of the Boston Huahua🧠

The Boston Huahua is known for being loving and affectionate with his owners. The Boston Terrier is also known for being friendly with other dogs, although this is not a trait that is shared with the Chihuahua, so your hybrid dog could either be great with other dogs or not. Although the Boston Terrier is also known to be friendly with strangers, the Chihuahua is once again much less tolerant. As such, this makes socialization an important part of owning this designer breed.

The Boston Huahua may inherit the friendliness of either parent. In the case of the Boston Terrier, this means that he will get along with absolutely anybody, including children of any age and visitors to the house. The Chihuahua tends to be more aloof with strangers, potentially wary and even a little vocal in his distaste.

However, he does also usually get along with kids. As such, if you are looking for a family pet and your children are experienced around dogs, this hybrid breed could make a great addition to your family home. If you have very young children, you should consider a different breed. The Boston Huahua is a very small breed and is prone to being poked, prodded, pushed, and pulled around. If you do have young children and get one of this breed, it is important that you supervise any time between them.

This is another area where the two breeds differ. The Boston Terrier is friendly with other dogs, while the Chihuahua tends not to be. Your hybrid dog could adopt either of these traits or you could end up with a dog that falls somewhere in the middle of the scale, accepting and loving a dog within his own family but not taking to those outside the family unit. The Boston Huahua should get along with cats and kittens if they are introduced when both animals are young but don’t expect a fully mature Huahua to get along with cats.

You should never leave your dog unattended with really small animals when they are out of the cage.

Things to Know When Owning a Boston Huahua

The Boston Huahua is a relatively new breed. As such, not much is known about the specific hybrid breed. However, plenty is known about both parent breeds and, as such, we can assume a lot of factors based on these breeds.

We do know that the resulting hybrid tends to make a good companion dog that will get along with all members of the family, and he will be bright and alert, but you should also consider the factors below when deciding whether this breed is suitable for your home and your family.

Both parent breeds are small dogs. They do not really have any special dietary requirements, because they are not working dogs nor are they extremely active. Expect to feed them around one and a half cups of food a day and split this over two equal meals. You should buy a decent quality dog food and ensure that you get food specifically designed for puppies and seniors, as required.

Although they are not overly active or energetic dogs, the Boston Huahua does still require daily exercise. Expect to walk them for between 40 minutes and an hour a day, ideally split over two or three reasonable walks. They do not need to be let off the leash, and they will be happy with a steady walk rather than a brisk run. When at home, your Boston Huahua will have reasonable energy levels and will almost always be up for a game.

The Chihuahua has a lot going for it, as a companion, but one area where it can prove a challenge is in training. This is because it can be quite stubborn and, if a Chihuahua doesn’t feel like being trained, it simply won’t do it. The Boston Terrier is more easily trained, however, but the combination of these two breeds can still result in a dog that is slightly challenging to teach. Be calm, be persistent, and heap plenty of praise and rewards on your dog for the successful completion of any training. Eventually, they will learn the commands you want them to.

Ensure that you socialize your Boston Huahua from a young age and keep up the practice. This helps teach your dog that meeting new people and experiencing new things does not need to be scary or potentially dangerous, and it will make it easier when they meet people as an older dog.

An area where the Boston Huahua is a joy to own is in grooming. They do not have any special or excessive grooming requirements. They have short and sleek hair that is easy to maintain, although they could shed twice a year or even over the course of the year, so a quick weekly brush will benefit you and them.

You will need to check and wipe their eyes quite regularly because this breed is prone to weeping eyes. Use a damp cloth and wipe away tears.

Be prepared to trim their nails roughly once a month, although this might not be required as often if they exercise on concrete or another abrasive surface on a regular basis.

One of the potential benefits of designer breeds is hybrid vigor. This means that the ailments and illnesses associated with purebred parents have been bred out of them. Whether hybrid vigor really exists is a matter for debate, so you will need to keep an eye out for the symptoms of any illnesses that are common in either parent breed. If you see signs or symptoms of the following complaints, visit your veterinarian as soon as possible.

The Boston Huahua combines the friendly and loyal nature of the Boston Terrier with the alert and fun Chihuahua. Both breeds are known for making excellent companions, and the resulting hybrid breed is equally revered for this purpose. You will need to socialize your dog early and you should avoid leaving them alone with small children, but grooming care is easy, their diet and exercise requirements are modest, and with care and persistence, they can be trained.

This Boston Terrier Chihuahua mix does not tend to do well when left alone for long periods of time, but he can easily and happily adapt to life in an apartment, which makes him a great choice for retired owners. He makes an excellent guard dog, too.