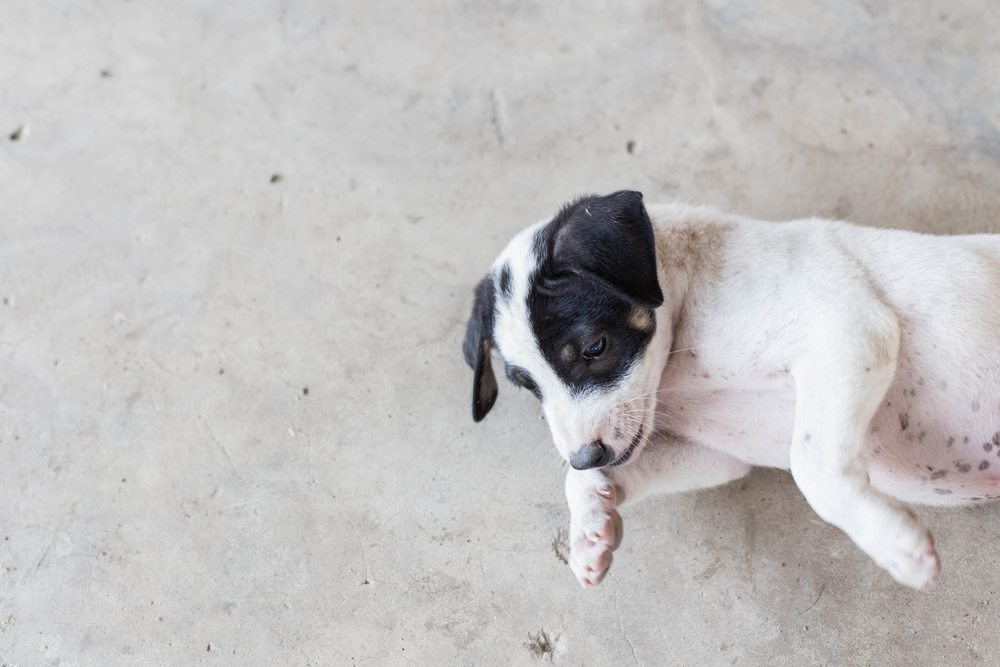 The Boston Spaniel is a mix between a Boston Terrier and a Cocker Spaniel, and being a hybrid, this breed takes traits and behavioral tendencies from both parent breeds.

These dogs can look quite different from one another based on which parent breed they resemble the most, but usually, they are medium-sized pups with adorable drop ears, a medium-length coat, and a stout muzzle that most often resembles that of the Boston Terrier.

Many dog breeds have exercise requirements as one of their most important needs, and while Boston Spaniels do require daily exercise, their emotional neediness is of the utmost importance to them. If you’re considering this breed, make sure you can provide the affection and attention they desire above all else. Along with this need for interaction, we’ll go over everything else you should know before committing to this beautiful dog below.

Boston Spaniel Puppies – Before You Get One…

You may be eager to get one of these adorable puppies home, and we don’t blame you — they’re as cute as they are cuddly. But before you dive into purchasing a Boston Spaniel, there are a few things you need to know about them.

This breed tends to bark a lot, and while training and positive reinforcement can help limit how vocal they are to some extent, you likely won’t avoid their barking altogether. This means that these dogs aren’t suitable for apartment dwellers or those who would be bothered by frequent barking.

You should also know that these dogs can be particularly destructive — the durability of your couches and other furniture stands to be tested with this breed. This behavior doesn’t appear in all Boston Spaniels, and it will be severely limited if they get the exercise and attention they need, but we would be remiss if we didn’t mention their tendency to chew.

1. They Don’t Do Well in Extreme Temperatures

Some breeds are simply more comfortable in a particular climate, but the Boston Spaniel is especially sensitive to very hot and very cold temperatures. It’s highly recommended that you only consider this breed if you live in a moderate climate.

These dogs are brachycephalic, which means they have that adorable smushed-in muzzle. As cute as this is, it also makes it harder for your pup to get the required oxygen. In moderate temperatures it shouldn’t be an issue, but extreme heat makes it even more difficult, so very high temperatures should be avoided.

These dogs also have rather fine hair that protects only against moderate cold, so extremely cold climates should be avoided as well.

2. They Have a Severe Fear of Missing Out

We mentioned that your Boston Spaniel will be needier than most other breeds, but they’ll also be emotionally shaken if they’re left out of family activities or outings. This breed will always want to be a part of the fun, and if they notice you and your family leaving together without them, they’ll likely be upset and wonder why they weren’t included.

This is a very sensitive breed, so if you’re looking for a dog that can happily be independent for stretches of time during the day, this probably isn’t the breed for you. Boston Spaniels want to be a part of the action at all times, and they’re happiest when they get to be included in everything you do.

3. They Have a High Prey Drive

Your Boston Spaniel will inherit the desire to chase anything small and furry from its Cocker Spaniel parent breed, which was originally bred for hunting. This means that your dog should never be walked off-leash, as even the best trained dogs can sometimes be overrun with the desire to chase.

You should also be very careful if you take your pup to a dog park, as they may resort to chasing smaller dogs. Boston Spaniels can also be a bit aggressive toward dogs of any size, especially if not socialized early on, so this may exacerbate their desire to chase down small dogs.

Temperament & Intelligence of the Boston Spaniel 🧠

The Boston Spaniel is generally a very friendly and outgoing dog. They’ll love and adore you and your family, and they’ll usually be great when meeting strangers, friends, or relatives. These are social pups that love human interaction regardless of whom the attention is coming from.

They’re sensitive dogs who are also energetic and love to play, and they enjoy relaxing with their owners as well, so outdoor activities are just as welcomed as movie night snuggled up on the couch. They are protective of their family and home, and they’re loyal to their owners, so they make good guard dogs as well. Their love for you will be evident in everything they do.

Boston Spaniels make excellent family pets. They love human interaction and will fit in with just about any member of your family, and that includes children. In fact, given their emotional neediness, they do best in large families and busy households where there’s always someone around to give them attention. They don’t like being left at home, and they’ll always want to be a part of any activity.

It’s important to note that this crossbreed needs to be socialized early on and often in order for them to adapt best to all kinds of people. They’re intelligent pups, so it’s likely that they’ll be able to tell the difference between high energy and low-key family members. Provided they’re able to meet and interact with many people during puppyhood, they should have no issue adapting to different family members.

Just like their interactions with humans, it’s important for Boston Spaniels to be socialized with other dogs early on. This breed can be unwelcoming or even aggressive toward other dogs, even those they live with. If they’re introduced and exposed early on, there will be far less of a chance of a problem.

Because of this breed’s moderate-to-high prey drive, they aren’t the best breed when it comes to getting along with cats or other small animals. Even early socialization with a cat or rodent probably won’t stop them from resorting to chasing them later on in life.

Things to Know When Owning a Boston Spaniel:

The Boston Spaniel is very easy to please when it comes to food. You should expect to give them the standard amount of food for medium dogs, which is between one and a half to two cups per day. This should be spread out into two meals to help keep your dog’s energy level up. Like all dogs, this breed will require a high-quality diet that’s rich in protein.

This breed is susceptible to hypothyroidism, so if your pup does start to gain weight (a common symptom of the condition), make sure you speak to your vet about the best feeding practices for your individual dog.

The Boston Spaniel has a moderate energy level, so they’re good dogs for people who are active for relatively short portions of the day. In addition to normal play, you should aim to exercise your pooch for around 45 minutes each day. This can include walking or jogging, and it doesn’t need to be very vigorous exercise to keep your pup happy and healthy.

Like we mentioned previously, your Boston Spaniel should always be on a leash or sturdy harness when outdoors in unenclosed areas. This breed has a high prey drive and might take off on a hunt before you have an opportunity to stop them.

You should remember that your pup will want to be included in all family activities, so as often as you can, bring your dog along for rides or other outings, even if the activity only adds to their daily exercise marginally.

These dogs are also intelligent, so in addition to their physical and emotional needs, you should challenge them mentally with puzzle toys or other mentally stimulating exercises.

Boston Spaniels are smart and will likely pick up on commands and tricks quickly, but they inherit some stubbornness from their Boston Terrier parent breed. This will make training somewhat difficult, so this breed is usually not recommended for new or inexperienced dog owners.

You’ll want to use positive reinforcement with this breed given their sensitivity, and you must begin training very early on to drill in the fact that you’re the shot caller. These dogs will gladly take the position of the dominant figure in your home, so you need to establish solid leadership with your puppy. Training these dogs will take patience and consistency, so be prepared to stick with it for the long haul.

This breed has medium-length hair that is straight but dense, so it’s prone to matting and will require brushing with a wire comb on a daily basis. This will also help cut down on shedding a little, but you’ll still need to break out the vacuum regularly, as this dog sheds quite a bit.

Boston Spaniels have drop ears that can drag along the ground and can easily pick up dirt and other debris. For this reason, you should plan to wipe your pup’s ears clean every other day to help avoid ear infections. If there is feathering noticed around the ears, it’s time to bring your pup to the groomer! They’ll be able to trim up your dog’s fur to help prevent ear infections as well.

Beyond these requirements, you should also brush your dog’s teeth once a week or so, and invest in some chew toys that improve dental hygiene. Keeping their nails properly trimmed will also help prevent broken nails that can be painful and lead to infection.

Boston Spaniels are generally a healthy and hearty breed, so vet visits will usually just be checkups. Still, you should keep a close eye out for the below issues that can surface in this breed. Thankfully, most aren’t life-threatening, but they should still be treated early if possible.

The Boston Spaniel is an adorable and beautiful breed that will make a wonderful addition to most families. While they may have issues with other dogs if not socialized properly, they’ll likely get along very well with all human family members.

These dogs are intelligent and emotional, so you should always be kind to them even during training, and you should include them in as many of your daily activities as possible. They have a severe fear of missing out on fun, and they can become destructive if they ever feel like they’re being neglected.

If you’re looking for a dog that will become a key part of your family and daily life and will adore you and love spending time with you, and you don’t mind committing time to give your pup attention and proper training, the Boston Spaniel may just be the perfect breed for you!