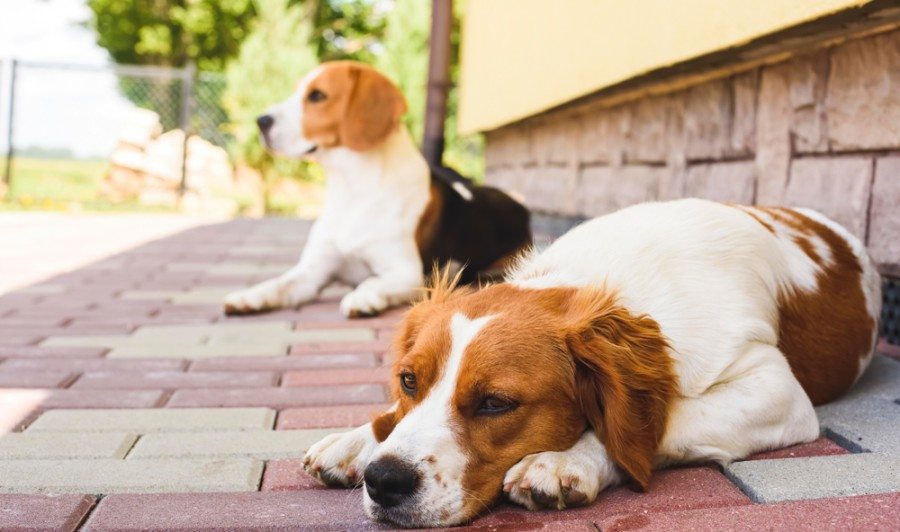 Few dogs can match the energy and eagerness for the hunt like the Brittany-Beagle. Both parent breeds bring this history to this pooch. The Brittany Spaniel traces its background to the area of France of the same name. He is a keen bird dog that has the stamina and endurance for a full day in the field hunting upland game.

The Beagle’s lineage and early ancestors go back to ancient Roman times. His quarry was hare and rabbits for which he succeeded admirably. He was—and still is—the everyday man’s hunting companion. He has an excellent sense of smell with enthusiasm to make the chase enjoyable. Both breeds are outgoing and friendly. They are also both loyal and intelligent, making this pup an excellent family pet.

The Brittany-Beagle doesn’t have to hunt to be happy. His essential needs are someone to love him and give him the attention he wants. He is well-suited toward spending time outdoors and exploring his world. To make sure that this pup is right for you, it pays to learn more about the parent breeds’ history and quirks. Let’s delve into the world of these sporting dogs.

Brittany-Beagle Puppies – Before You Get One…

Both parent breeds bring a happy-go-lucky nature to the mix. However, it’s always smart to research what you can expect from this fun-loving pooch. The Brittany-Beagle is an active dog that needs an owner to provide enough opportunities for him to run and work off his energy. Remember that it’s a part of his history be roaming the field in search of game.

The Brittany Spaniel Beagle mix is a vocal pup that makes his feelings known. He also has a bit of a stubborn streak, which isn’t unexpected given his purpose. That also makes him smart with a touch of independence to boot. He has a strong prey drive and an equally high wanderlust potential. Despite all these facts, this pooch is sensitive to harsh reprimands.

1. President Lyndon B. Johnson Loved His Foot Hounds, a Term That Describes the Breed’s Hunting Style.

President Johnson loves Beagles so much that he had two in the White House: Him and Her. Him fathered two additional pups that Johnson’s daughter, Luci, owned called Freckles and Kim. Alas, Him’s strong prey drive got the best of him. He was run over and killed when he gave chase to a squirrel.

You can think of Brittany Spaniels as the Swiss Army Knife of gundogs. They can retrieve as well as point. They have the stamina to traverse all kinds of terrain. It helps that they have a keen sense of smell, too. This breed is so talented that it has received the prestigious Dual Championship (DC) title for both Champion of Record and Field Champion (FC), the most for any dog in the Sporting Group.

3. Beagles Came Across the Pond to the United States After the Civil War.

Beagles are long-time favorite hunting dogs in England. When people starting bringing them to America, it was love at first sight. They proved themselves just as capable gundogs here as in their native land. The Beagle joined the ranks of the AKC-recognized breeds in 1885, along with the St. Bernard and Bloodhound in the same year.

Temperament & Intelligence of the Brittany-Beagle 🧠

His intelligence, combined with his willful nature, makes the Brittany-Beagle a less than ideal choice for the first-time pet owner. He needs someone that understands his temperament and can handle his independent personality. However, this pup can learn a wide range of skills. He’ll also make an excellent running companion or hiking partner for outdoorsy families.

The friendly demeanor of the Brittany-Beagle makes him a good family pet. He is kid-friendly and will keep up with them all day long. He’ll likely get as excited about play as they will. This pup is also very affectionate, even with strangers. He has a moderate tendency to nip. Both parent breeds bring a vocal nature to the mix, too.

Both parent breeds hunted with other dogs, so they often get along fine with other pets. Early socialization is essential to encourage this behavior. The strong prey drive of the Brittany-Beagle may lead him to chase the family cat if she runs from him. It also raises concerns about other small animals the kids may own, such as rabbits or guinea pigs.

Things to Know When Owning a Brittany-Beagle:

Knowing that the Brittany-Beagle is a bundle of energy only scratches the surface of what this dog has to offer as a family pet. The best way to find happiness with this pooch is to know what he needs and things that you should know upfront. Perhaps the perfect takeaway message is that this pup wants to run and play with you and your family every day.

The Brittany-Beagle is a medium-sized dog and needs a diet formulated for a pup of his stature. Despite his high energy level, this pooch has a tendency to gain weight. Monitor his food intake and activity. Remember that the directions on the label are only a suggestion. We recommend reserving treats as a training aid to tame his stubborn nature.

Food is the second leading category of expenses for owning a dog. Don’t skimp on it with a diet that isn’t right for the breed and life stage of your pet. The latter is especially important to prevent obesity. Puppy products are nutrient-dense to support their rapid growth during that critical first year. As a medium-sized pooch, your Brittany-Beagle will reach his adult size at about one year.

A Brittany-Beagle not only needs exercise, but he’ll do best if he can run every day. His easygoing nature makes him a willing playmate at the doggie park. However, you shouldn’t just leave this pup in the backyard. He craves human companionship and won’t tolerate being alone for long stretches. Daily walks are just the thing to reinforce the bonds between you and your pet.

Intelligence is a double-edged sword with some dogs. That’s the case with the Brittany-Beagle. It isn’t that he lacks the enthusiasm to learn. It’s just that he also gets bored quickly. Then, there’s that independent streak, too. That’s where the treats will come into play. They will make following your commands a no-brainer.

Both parent breeds shed, so it won’t matter which one is dominant in the mix. If your pet is running in the yard all day long, it’s a smart idea to check his coat frequently for burrs and ticks. If there is more Brittany Spaniel in your dog, be sure to examine his ears occasionally for mites or other infections. We suggest getting your pup used to you handling his paws, so that nail trimming isn’t a chore.

Brushing the coat of your Brittany-Spaniel a couple of times a week will ensure that it stays healthy and matt-free. You may find it helpful to reward him for his efforts to sit still long enough for you to groom him.

The popularity of a breed sometimes works against it. That is the case with the Beagle. Joint problems are the primary concern. Therefore, we strongly urge you to only buy from breeders who have done the recommended health screenings. Many of these exams require a follow-up test later in your puppy’s development. Don’t neglect this vital task.

Male and female Brittany-Beagles are closely matched in size and temperament. Anecdotal observations point toward males being the more affectionate of the two sexes. We believe that it’s a matter of upbringing. However, we also suggest consulting with your veterinarian about neutering or spaying your pup when it is appropriate for your pet.

To say that the Brittany-Beagle is a bit of a handful is an understatement for this lively and happy dog. As with any breed that has a job, this pooch does best if he can get plenty of exercise and enough mental stimulation to keep him occupied. In return, you’ll have a loyal companion that will love you and your children as much as you do. This medium-sized pup promises a lot of fun and playtime.