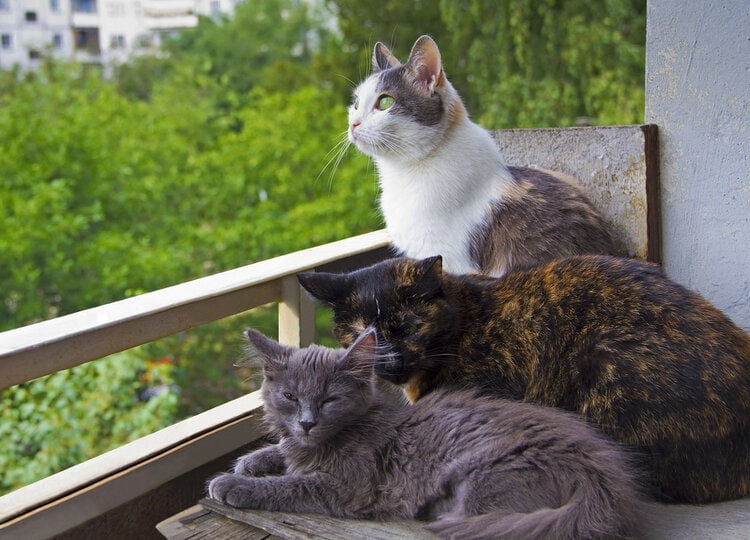 Identifying and naming cat coat patterns and markings can get a little confusing because there are so many different categories and subcategories. It can be difficult keeping track of each one.

We’ve listed some additional rare patterns as well. Keep reading to become more familiar with all the unique and fun types of cat coats.

There’s a wide variety of solid colors that a cat can have. The most common solid-colored cats that you’ll see are black, gray, and white. Rarer colors include chocolate, cinnamon, fawn, lilac, cream, smoke, and chinchilla.

Bi-color cats are white and have one other primary color. Often, this color is black, but this isn’t always the case. Cats with bi-coloration also have the identification as piebald cats because of the piebald gene. This gene adds different amounts of white onto a cat’s coat.

Bi-colored cats have classifications and names depending on the appearance and markings of white on their fur. Locket cats have a small white patch on their chests, and the rest of their fur is another solid color. Tuxedo cats have white chests, stomachs, and paws. Some parts of the face can be white as well. Cats don’t have to be just black and white to be Tuxedo cats. They can be white and any other color. Standard bi-color cats, or true bicolor cats, have equal amounts of white and another color on their fur. Mask-and-mantle cats look like they’re wearing a mask. White is mostly on the underside of the cat and the bottom of the face. Colored fur is on the top part of the cat’s head and back, and the color runs to the tail. Cap-and-Saddle cats are similar to mask-and-mantle cats, except they have fewer colored areas. Colored fur is only on top parts of the cat’s face, such as just the ears. There’s a break of white on the cat’s back, and the colored fur resumes on the lower back. Harlequin cats are white cats with small patches and spots of color. Usually, the tails have color. Van cats only have color on the head and tail.

Within the tabby pattern, there are five main varieties:

Mackerel tabbies are the most common type of tabby cats. They have a stripe that runs down the spine and evenly spaced perpendicular stripes running along the cat’s body. The classic or blotched tabby has stripes on its head, like the mackerel pattern. However, there are swirls on the body instead of straight stripes. Like the name states, the spotted tabby has spots instead of stripes all over its side. The spots can be different sizes, and they’re either circular, oval, or rosettes. Ticked tabbies may not look like typical tabbies at first glance. However, they have agouti hairs, meaning that a single strand of hair has bands of different colors on it. Up close, you’ll see that ticked tabbies do have stripes on their faces and similar markings as tabby cats. Patched tabbies have tortoiseshell coloration mixed with tabby marking and patterns. They also go by “torbies” and are a rare type of tabby cat.

People often confuse calicos with torties. The main difference between the two patterns is the presence of white in calico cats. The most common color combination is white, orange, and black. You can also find cream, blue-black, red, and brown. Most calicos are girls because of the calico pattern’s connection with the X chromosome. Two X chromosomes have to be present for a cat to have a tri-colored coat. In rare cases, males can be calico. They have two X chromosomes and another Y chromosome, and these male cats can have Klinefelter’s Syndrome. They’re also usually sterile.

Tortoiseshell cats, or “torties,” usually have a mix of black and ginger-red colors that are either a brindle pattern or appear in patches. People often confuse torties as a breed, but it’s actually a pattern that many breeds can have.

Several well-known cat breeds can have the tortoiseshell pattern:

Cat breeds that commonly have the color-point marking are the following:

What Are the Rarest Cat Coat Patterns?

Albino cats are the rarest of all cat colors. They’re extremely rare because it requires a kitten to inherit two recessive genes, and it’s impossible to breed them purposely. Albino cats will have pink skin and white fur, and their eyes will either be pink or blue. They’re unfortunately prone to getting sick and often have immunodeficiencies.

Cats with this coloration may first appear as just black cats. However, on closer examination, you’ll notice that they have a band of white near the roots of their hairs. Because of this banded coloration, the coats of black smoke cats have a unique appearance when the cats are in motion. The coat appears wavy, and it’s interesting to watch them move around. Black smoke coloration only applies to solid-colored cats, so tabby cats and other patterned cats cannot receive the classification of black smoke.

Silver cats are different from gray cats because only the tips of silver cats’ hairs are black or gray. This type of coloration makes silver cats appear shimmery. Silver cats can have coats with solid colors or patterns.

As we’ve discussed previously, calicos are rare because the pattern mostly appears in female cats. Most of the rare males with calico patterns are sterile, making it all the more difficult to breed calico cats.

There are a lot of fun and interesting facts about the colors and markings of cats. Some colors and patterns are common, while others are very rare. We hope you have a newfound appreciation for cat colors and patterns. The next time you meet a cat, make sure to stop and admire its coat. It can provide traces of clues that lead to its unique history and heritage.