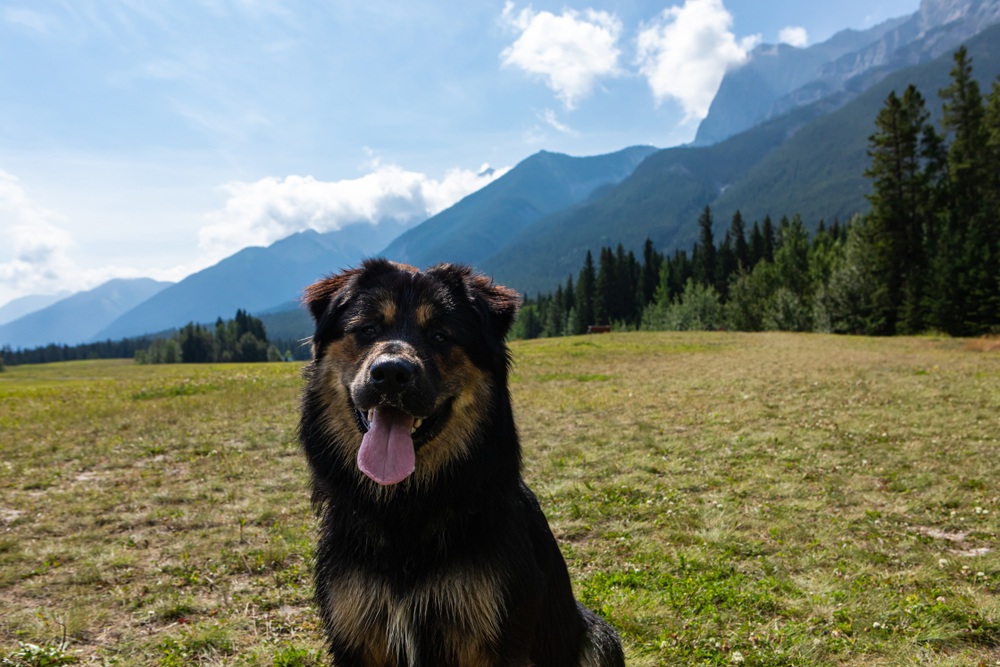 The Euro Mountain Sheparnese is a cross between the Bernese Mountain Dog and the German Shepherd. Since both of these dogs are considered large breeds, their combination creates a formidably sized dog. They weigh up to 110 pounds and have a double coat, making them look even more substantial.

No matter their size, the level of their intelligence and their hearts are just as big. These dogs make excellent family dogs and companion dogs and are especially useful as guard dogs because their sheer size makes them a force to be reckoned with.

The Euro Mountain Sheparnese is not a standard mix, so it can be challenging to find quality breeders. They are still recognized by many clubs and registries, though, such as the American Canine Hybrid Club and the Dog Registry of America.

Euro Mountain Sheparnese Puppies — Before You Get One…

1. The Bernese Mountain Dogs are supposed to have worked on farms 2,000 years ago.

Bernese Mountain dogs were initially called Swiss Mountain dogs. Although they were not originally from the Swiss Alps region, it is the area with which they have become the most strongly associated. The reason for this is their longevity, having been brought to the region by the invading Romans 2,000 years ago.

They were well-suited to the Swiss Alps and quickly became famous as a “farmhand,” being such big dogs that they could help haul carts around. They were also used as herders and traveled the Alps with their shepherding masters.

As in many other areas of the world, the need for so many small farms decreased in the 19th century and the use for these pups along with it. They began to see a sharp decline in overall popularity. Luckily, there were devotees to the breed that worked hard to maintain their bloodlines.

The Bernese Mountain dogs became popular all over Europe. Still, they didn’t see the shores of America until after World War I. When they were imported into the country, they quickly began their climb in popularity and were accepted by the AKC in 1981.

The Euro Mountain Sheparnese still have the hard work ethic and strength of the Bernese parents. It is due to these traits that they make excellent farm dogs. They like to have a job to do and appreciate more space to run around in as well.

2. German Shepherds are a popular but relatively young breed.

German Shepherds are one of the younger dog breeds, although most people wouldn’t guess it because of their extensive popularity. The Germans initially bred them, supposedly a Captain Max von Stephanitz, who wanted to produce the most obedient and well-rounded dog.

He did so by studying desirable traits in many different dog breeds in Germany during the late 19th century and developed the German Shepherd as a result.

Since then, they have spread around the world as a popular dog. It is mostly because of their alert temperaments, loyalty, and high trainability.

However, if you want to invest in a German Shepherd or one of their hybrids, check into the breeder’s reputation and parental background. So much popularity has encouraged bad breeding, where some desirable traits end up in the mix.

3. These dogs can be mistaken for Rottweilers, depending on which parent they favor.

Sometimes, it can be confusing to differentiate purebred and well-known dogs from other lesser-known hybrids. In the case of a Euro Mountain Sheparnese, they can easily be mistaken for a Rottweiler. The reason for this is because of their coat color and texture patterns.

Both the German Shepherd and the Bernese Mountain dog have a double coat, meaning two layers of fur for extra protection from the elements. It also means that they tend to shed quite a bit. They also have similar color patterns to one another, black and tan, with the Bernese typically having white splotches on their chest and paws.

The German Shepherd’s coat is accepted as medium or long haired, while the Bernese has long hair. If the hair ends up being shorter, favoring the typical German Shepherd look, then the combination of physical traits makes them resemble a Rottweiler.

The Euro Mountain Sheparnese makes an incredible pet, being a combination of two competent dogs. They inherit a strong work ethic and demure attitudes from both of their parents. Both can also be serious, although younger pups still like to play with their family members.

These dogs make an excellent watch and guard dogs because they are always alert and ready to protect. They can be cautious of strangers, so if your dog is socialized, be careful about teaching them appropriate social manners.

These dogs are highly intelligent, coming from two independent breeds trained to be thinkers of a sort. They like to have the freedom and trust to make some of their own decisions. They are generally quite easy to train, but their size, energy, and sometimes temperaments make them not fit for first-time owners.

These dogs are generally good family dogs. Our recommendation would be not to keep them around very small children because they can be intense and typically don’t realize their bulk. They are protectors, though, and take this charge quite seriously.

These dogs can be wary of strangers; however, they are friendly and attentive with their own family. Their affection is what makes them a beloved pet.

Early socialization is an essential factor in the training of these dogs. Regarding their parent breeds, it is relatively unpredictable how well they will get along with other dogs.

Sometimes they can be quite territorial, while at other times, they are friendly and extremely social.

Keep in mind that each dog is different, no matter what breed they come from, and they may need extra training to behave appropriately in different social situations.

Things to Know When Owning a Euro Mountain Sheparnese

These dogs are costly to invest in as puppies, but you also have to be ready to pay for their large appetites. It is possible for these dogs to eat you out of house and home. They can eat 3.5-5 cups of food each day, depending on which end of the size scale they end up.

If you have one of these dogs, you will find that vets and breeders highly recommend avoiding food with any fillers or additives. In these dogs, it can lead to behavioral issues.

These dogs are highly active. They need a great deal of exercise each day and are thus not an appropriate choice for those who live in apartments or small homes unless they belong to an active owner.

They need about 3 hours of high to medium levels of activity each day or about 14 miles of walking every week. Since they are highly trainable, you can try agility training. Since they need quite a bit of socialization, it is best to take them to some sort of dog park from as young an age as possible.

The Euro Mountain Sheparnese needs to be leash trained from a young age. They are large dogs that were often used for pulling, especially the Bernese Mountain dog. It means that they are known to pull on the leash, but this can be trained out of them with consistency.

Forming a bond with these dogs is a sure way to find success in obedience training. The trainer needs to establish themselves as the leader. When this is established, their intelligence and willingness make them quick and easy to train.

These dogs have double coats that shed quite a bit year-round. They need daily brushings to keep any knots out of their fur and their skin and coat healthy. You need to clean their ears thoroughly every several days, removing wax and dirt from the inside and preventing infection.

Brush their teeth at least a couple of times a week, preferably daily because these dogs sometimes suffer from dental issues. Clip their nails once a month or so if their daily activities don’t keep them trimmed down far enough.

Unfortunately, these dogs can suffer from quite a few diseases. Like many other big dogs, they have relatively short lifespans. Make sure to bring them to the vet at least once a year to catch any health issues as soon as possible.

Since these hybrids are not common, there are not many characteristics that can be readily attributed to the separate genders.

Males of the Euro Mountain Sheparnese are taller and heavier. They weigh between 80 to 110 pounds and stand at 25 to 28 inches tall.

Female Euro Mountain Sheparnese weigh, on average, slightly less at 75 to 90 pounds. They stand around 23 to 26 inches tall.

The Euro Mountain Dog is a mix of two extraordinary dogs. Both of them combine to make a giant dog breed with a heart that is just as big.

These pups get along well with children, making great family pets. They have a docile yet alert temperament that makes them useful for a position as a guard dog or a watchdog.

The Euro Mountain Dog does need a great deal of exercise, so be prepared to be out and about more than before.

Whether you are looking for a companion as a single, active person or you want a dog friend for your kids to grow up with, the Euro Mountain Dog should be a serious consideration.