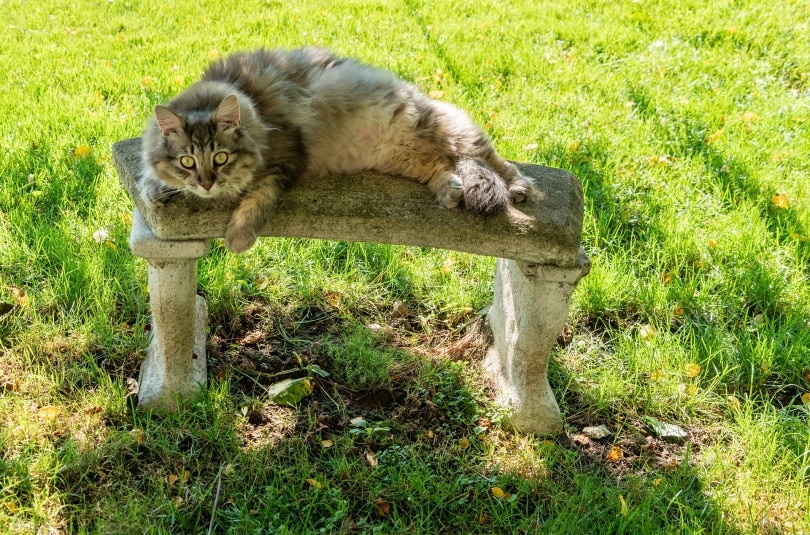 In simple terms, the Grey Maine Coon is a gentle giant. It impresses with its extraordinary size and his rugged appearance. Although its origin has provided it with unfailing hardiness, the Grey Maine Coon adapts easily to domestic life and makes a gentle, affectionate, and devoid of mischief companion. Read on to find more about its history, origin, and unique facts that make this cat special.

The Earliest Records of Grey Maine Coon in History

Several legends run on the origin of the Grey Maine Coon; the most widespread says that it would result from a cross between an American wild cat (bobcat or lynx) with a raccoon, which would explain its color and its type of fur. Of course, it is genetically impossible to achieve such a cross.

In fact, the Grey Maine Coon originated in the United States, specifically in the state of Maine, as the name suggests. This breed is believed to result from crossbreeding native semi-wild cats from the northeastern United States with Angora cats imported by early European settlers. These Angoras are said to have been sent by Marie Antoinette of Austria as she prepared her flight to escape the French Revolution. They were reportedly brought in by Captain Samuel Clough of Wiscasset, along with the Queen’s other personal effects.

At the end of the 19th century, the first specimens were shown at cat shows in Boston and New York. They were very successful, but the breed’s popularity was quickly eclipsed by the popularity of the Persians, Siamese, and other so-called pure breeds. The Maine Coon then became rarer but reappeared in the 1950s.

The conservation of the Maine Coon is due to North American farmers, who took care to preserve the breed during its period of eclipse. Today, the Maine Coon has regained the hearts of Americans and is recognized as the quintessential American cat.

Whatever its exact origin, by the very beginning of the 19th century, farmers and fishermen in Maine already appreciated the skills of hunting mice and other rodents of the Maine Coon. Valuable and robust, this cold-resistant cat began to be featured in local agricultural shows from the 1850s.

This was followed eventually by official recognition by the American Cat Fanciers Association (CFA) in 1976, The International Cat Association (TICA) in 1979, the Fédération Internationale Féline (FIFé) in 1982, and then by the British Governing Council of the Cat Fancy (GCCF) in 1993. So, in just a few decades, the Grey Maine Coon not only rose from its ashes, but it even found itself propelled among the most popular cat breeds in the world.

1. The Main Coon might be the result of a cross between a cat and a raccoon.

Obviously, this is only an urban legend. For a long time, it was believed that the Main Coon was a cross between two animals of different breeds. Years have passed, science has evolved, and we now know that it is impossible. Although its origin is still a mystery, everything suggests that it originated in the United States.

2. The Main Coon is among the top 5 most popular cats in the world.

Do a simple Google search for ‘most popular cats’ and you’ll see the Main Coon among the big names like Ragdoll, Exotic Short Hair, and Persian.

3. The Main Coon is VERY long.

Besides being a massive cat, he is also a very long cat. The Main Coon holds just about all the world records in terms of length. Some cats can reach almost 120 cm in length.

Don’t let his stern demeanor and imposing posture fool you. The Main Coon is gentle, affectionate, and kind. All of these qualities make him a wonderful cat for the whole family.

Unlike many other cat breeds, the Main Coon will not hesitate to dip in the tub.

6. The Main Coon is an athlete.

Due to its large build, the Main Coon needs a lot of exercise and entertainment. He will always be there to play with you. You could even get him a leash and walk him outside.

Not only do you need to provide them with what they need to keep them entertained, but you also need to watch their diet.

He can be pretty talkative, especially when it comes to chatting with family members. It can make a variety of sounds.

9. The Main Coon can grow into an enormous cat.

On average, the male can weigh between 14 and 20 pounds and the female, between 9 and 13 pounds. However, it can weigh up to an astonishing 25 pounds, making it a hugegiant cat. For comparison, other breeds weigh an average of 10 pounds.

Although their origin makes them extremely rustic, the Maine Coon adapts easily to apartment life. Relatively calm, he is not inclined to run and climb everywhere, although his massive build can lead him to knock over some objects accidentally.

For the Maine Coon to exercise enough energy and thrive, it is advisable to provide a cat tree and perches, especially if he lives in an apartment. He must be stimulated at the level of the game to feel good and live happily in a closed space. Very robust, the Maine Coon can adapt to all environments and climates, even the harshest.

Affectionate, the Maine Coon will find happiness with a loving, present, and attentive owner. He will like to be pampered, played with, and even taken for walks on a leash from time to time. Being sociable and having an excellent character, the Maine Coon is compatible with young children and other pets.

Note: The Grey Maine Coon is a massive cat, sure, but that doesn’t mean it should be overfed. It is essential to watch their diet carefully and not exceed the portions suggested by your veterinarian, as this breed is prone to gain weight if you let things go.

And just like dogs, the Maine Coon can suffer from hip dysplasia. Obesity is a significant risk factor in the development of hip dysplasia, as the extra weight carried on the hip joints worsens the condition of these kitties.

Did you know Maine Coons also come in Black and Orange?

In short, the Maine Coon is a magnificent cat who often has great size, who has somewhat nebulous origins (which adds to his aura of mystery), who is kind and pleasant to humans, and who s’ adapts to any environment. If you desire to have one in your home, be sure to refer to a trusted breeder and get ready to share several years of happiness with your furry, loving giant!

Already have a Maine Coon? Check out our 10 Best Cat Beds Reviews to find one that’s right for your feline.

Do Cats Know When They Are Dying?