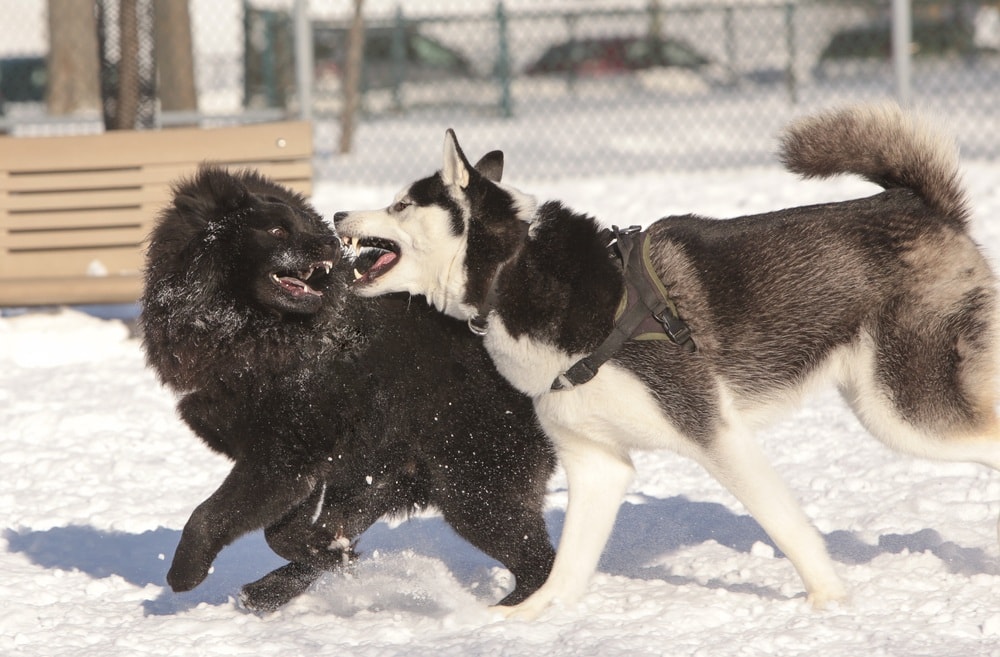 Whether you’re a dog-walking professional or simply a concerned owner, it pays to be prepared in case a dog fight breaks out. In addition to the health of your four-legged friend, your own safety and well-being might be in danger if you fail to follow best practices and keep everybody as calm and secure as possible.

We’ve received dozens of questions and requests for information about what to do if a dog fight breaks out, so we’ve decided to address all of them in one comprehensive guide.

Beginning with some common-sense advice for how to avoid dog fights in the first place, we’ll then cover the warning signs that a dog fight is about to break out. Next, study up on the most effective methods to break up a dog fight in case worse comes to worst – including what you absolutely should not do, as well as next steps to take if your dog gets injured.

How to Prevent a Dog Fight:

Pop quiz: what are the two most common causes of dog fights?

Many people guess “aggressive breeds” first and foremost, but this is rarely the cause of fights.

No, the most common triggers for a dog fight are food and toys, two extremely important items to dogs that can immediately trigger territorial instincts. Right after that, you’ll find two more territorial triggers: perceived aggression towards a dog’s owners, or simply standing too close to a dog that’s feeling nervous or standoffish.

In your own home, preventing dog fights is often a matter of not feeding dogs right next to each other, and making sure to buy enough toys for every pup that wants to play. When you’re finished playing, clean the toys and put them out of sight – this will wash off much of a dog’s smell, and discourage them from claiming a specific toy as “theirs”.

In public places, be mindful of where food, toys, and owners are placed relative to any dogs in your area. Keep a firm grip on your dog’s leash in areas where you don’t know the other dogs who are around and hold your dog very close to you to prevent them from pulling hard on their leash.

When you're trying to understand your pet's behavior, you don't want to have to worry about vet costs. A customized pet insurance plan from Lemonade can help you make sure your pet is well taken care of.

Warning Signs of a Dog Fight

Calmly separating dogs at the first glimpse of any of the following warning signs will help to de-escalate a potentially violent situation:

Keep an eye out for these warning signs, and firmly but quietly redirect your dogs to different areas. If you can prevent the two dogs from being able to make eye contact, this will quickly defuse tense situations.

Depending on the severity of the fight and the size of the dogs relative to their owners, any of the following methods might work to break up a dog fight:

1. Pull Backward on the Collar

For smaller dogs and less intense fights, simply pulling back on the collar of either or both dogs is usually enough to discourage them from continuing to fight. Pull straight backward, not upward, as this can cause your dog to mistakenly identify you as a new aggressor.

If either dog has a tight jaw grip on the other, you’ll need to insert a long stick into the collar of that dog, then twist clockwise or counterclockwise. The uncomfortable tightening will cause the dog to loosen its bite, and the stick will then allow you to pull the dogs apart.

Making very loud noises or throwing a large amount of water over both dogs will sometimes shock them so thoroughly that they forget that they were fighting. Air horns are great for this, as well.

Placing a large barrier between two fighting dogs will quickly de-escalate the situation, especially if it causes them to be unable to see each other. Look for a trash can lid, large box, or similarly oversized object to push between them.

What Not to Do

A big part of successfully breaking up a dog fight is understanding what you should never do, summarized in this list:

What to Do After A Dog Fight

Once you’ve successfully separated two agitated dogs, follow this checklist to ensure their health and safety:

What to Do if Your Dog Is Injured

In the case of minor or severe injury in a dog fight, it’s your responsibility to get your dog to their veterinarian as soon as possible. Once you’ve separated the dogs and established a safe distance, call your vet right away and explain the severity of your dog’s injuries. They’ll either give you instructions for at-home care or tell you to bring them into the office right away for treatment.

Final Thoughts on How to Break Up A Dog Fight

Dog fights can be especially scary the first time you’ve been exposed to one, but understanding what to do next will keep both you and your canine friend safe and healthy. We recommend committing the information shared above to memory, so you’ll be ready and able to use it in case of an emergency. Pay plenty of attention to preventing dog fights based on their warning signs, and we hope that you’ll never have to use any of this info.

Do Dog Whiskers Grow Back? What You Need to Know!