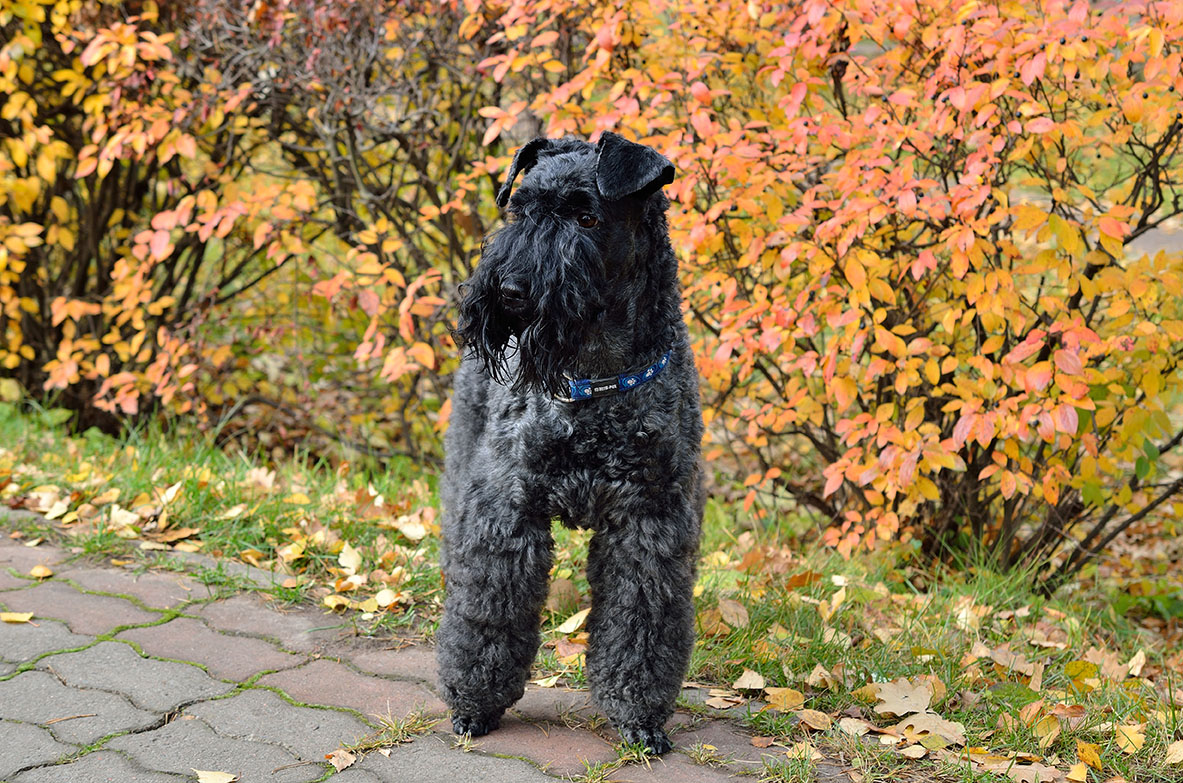 The Kerry Blue Terrier is a medium-sized purebred working dog. He was originally bred to control rats and other vermin including rabbits and hares. Today’s Kerry Blue may maintain some of the instinctive prey drives of his ancestors, but he is more likely to be found in the show ring, performing in agility classes, or sat with his owners at home.

They are named for the country of their origin and the color of their eye-catching coat, which is soft to touch. The breed is affectionate with family members, friendly towards strangers, but may not get along with other dogs, and tends to chase anything smaller than him. He is considered quite easy to train, but he does have high energy needs. Without adequate and regular exercise, he can be prone to destructive behavior — this is especially true because he is a working dog. If he isn’t chasing rats in the barn or through fields, he needs some way to simulate this kind of behavior. Left to his own devices in the yard, he will dig, chew, and investigate anything within the borders of his territory. He is also excellent at jumping, and can easily clear a short fence.

Kerry Blue Terrier Puppies – Before You Get One

Many terrier breeds share similar properties, including being prone to barking at strangers. This attribute makes them excellent guard dogs. They are highly alert, which means that they will easily spot anybody new that might be approaching the home and alert you to their presence. Unfortunately, they will also alert you to the presence of the mailman, delivery man, milkman, and possibly even the neighbors approaching their own door. Although they are considered friendly with strangers, some Kerry Blue Terriers can be apprehensive or shy around people they don’t know.

The coat of the Kerry Blue Terrier is one of the breed’s most prominent features. It looks stunning, but it is far from being low maintenance. You should be prepared to provide daily grooming sessions to prevent their coat from becoming matted and knotted. If you intend to show them, they will also need regular cuts and styling. Unless you are an experienced groomer, this may be best left to a professional that has experience with the breed.

3. It was nearly the National Dog Of Ireland.

The Kerry Blue Terrier is named after County Kerry in Ireland, where it was supposedly first spotted in the mountains of the region. Irish Nationalist, Michael Collins, owned one of the breed and he was so taken with it that he attempted to have it named as the national dog of Ireland. He failed in his attempt, but its popularity led to the formation of the Dublin Irish Blue Terrier Club and the popularity of this group led to the formation of the Irish Kennel Club. The Kerry Blue Terrier was the first breed to be recognized by the Kennel Club.

The Kerry Blue is usually very good with people of all ages, including young children. As such, he has become a popular family dog, as well as still being used as a working dog and being shown at events and dog shows. He is happiest when he is with the group that he calls his family, should never be left outside, and should not be left alone for long periods. A bored or lonely Kerry Blue Terrier can become destructive.

Great with children, the Kerry Blue Terrier makes a good family watchdog. He is constantly alert. While he is not overly prone to barking, he can be quite intimidating when he does. He can be a strong-willed dog, which means that he needs an equally strong-willed owner. If you give him an inch, he will take advantage. As suitable as this dog is for families, he is not considered a good dog for first-time owners because he will walk all over a timid owner that does not set strong boundaries.

The Kerry Blue Terrier also tends to do better as a lone dog. The breed is well known for being dog aggressive. Although breeders have taken some steps to minimize this, while still retaining the breed’s lively and alert nature, it does still exist. Early socialization will help to reduce this aggressiveness, but you should always take care when your Kerry Blue is around other dogs. He will want to dominate any other dogs in the house, too, although if you introduce him to another puppy when he is young, they may learn appropriate roles.

He is more than just a Terrier by name. The Kerry Blue has been used to chase and catch rats, rabbits, and other burrowing animals. He still has a prey drive, although this varies from one dog to the next. As such, it is unlikely that he will make a good companion for cats and other smaller animals. It is this instinct that means you should keep him on a leash when walking him, too.

Things to Know When Owning a Kerry Blue Terrier:

If this sounds like the type of dog that will fit in well with your lifestyle, you should consider the following factors before investing in a puppy of this breed:

The recommended amount of food for this breed is between 1.5 and 2 cups of good quality food every day. This should be divided into two equal meals, typically one at breakfast and one at dinner time. If your Kerry Blue is a working dog, then he may need to eat a little more, or you can feed him a food that is geared towards working dogs.

Your Kerry Blue will require a lot of exercise. He is a muscly and energetic dog. While some will entertain themselves in a securely fenced yard, most will still require additional exercise every day. This also allows you to socialize your Kerry Blue to ensure that he is well adjusted and knows how to behave around other dogs and people. Taking him on walks also provides your Terrier with the mental stimulation that he requires. If your dog does not get any exercise in the yard, expect to walk him three times a day and don’t expect a sedentary or slow walk.

Training and socialization are important for most breeds, but especially for breeds like this one. Start with puppy classes because these will teach your puppy some of the basic commands, while also teaching you how to train your dog in the future. Classes also enable you to socialize your dog, teaching him that new situations, people, and other dogs are not to be feared. It also teaches him manners so that he knows how to behave around others.

Socialization can help control some of the aggression that the Kerry Blue displays towards other dogs, but he will always have the capacity to snap, so you will need to remain cautious.

The Kerry Blue starts with a black coat that becomes blue over time. His coat is usually his most prominent and memorable feature. The coat is soft but dense, and it is wavy. It will require daily brushing, otherwise, it will become matted and knotted over time. His hair will also need trimming roughly every month with particular attention around the eyes and face. His beard can easily become filled with food debris and if you don’t control the fur around his eyes, he will find it difficult to see out.

You should get into the habit of brushing your dog’s teeth three times a week. Ideally, you should start this when they are young and more accepting of new activities. If you try and start brushing the teeth of an older dog without him having any prior experience of this, it will be very difficult to do. If your dog allows it, brush every day to prevent tartar buildup and dental hygiene issues.

Your dog’s nails may need regular clipping, too, although this will depend on the amount and type of exercise he enjoys. If your dog walks on concrete regularly, this will naturally keep his nails short. Otherwise, you will have to take on this role and trim his nails roughly every month.

Finally, check his ears and eyes every week. Check the ears for bad smells and signs of infection. Wipe them with damp cotton wool.

The Kerry Blue is generally considered to be a healthy and hardy dog and enjoys an average lifespan of around 12 to 14 years. If he is healthy, he may live longer than this. However, like all dogs, he is prone to some genetic conditions. Keep watch for symptoms of any of the following and seek medical attention if any are evident.

There will always be debate over whether male or female dogs are better. In terms of size, the male will usually grow a little larger than the female. Males are sometimes considered to be more confident and aggressive than females, but this does depend more on the individual dog and his upbringing and training.

The Kerry Blue Terrier is a Terrier by nature, and not just by name. He has a prey drive, can be considered dog aggressive, and he won’t usually get along with cats and other small animals. However, he is a great companion for humans, including children. He is alert and loving, loyal, and will respond to good training. He is not usually considered suitable for first-time and novice owners, though, because of his dog aggression and because he can be headstrong during training.

Plenty of exercise, early socialization, and regular grooming are necessary for this breed. A lack of exercise or training, as well as being left alone for long periods, will lead to behavioral issues and destructive tendencies. If you have the experience and the patience, though, the Kerry Blue can make an excellent family companion.