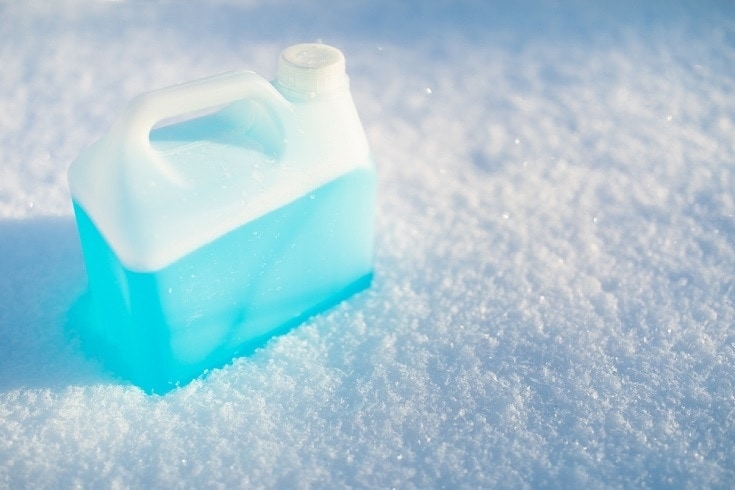 As temperatures drop, one common household product we often reach for is antifreeze- to protect our vehicles and machinery from the cold. Antifreeze is extensively used in car screen wash and radiators, and often found in garden water features, surface water, and puddles. Some types of antifreeze can be very appealing to animals as they taste sweet, and unfortunately, these types can be very poisonous to dogs and cats. Even a small amount can be life-threatening to your pet. Here’s why, and what to do about it if you think antifreeze has been swallowed.

If your dog swallowed antifreeze, immediately remove any remaining. Try to determine what your dog consumed, how much, and when. Then call your veterinarian and follow all advice.

Why is antifreeze toxic to dogs?

The main poison in antifreeze is called ‘ethylene glycol’. Once swallowed, it is rapidly absorbed and is then picked up by the body’s natural metabolism. The liver accidentally turns ethylene glycol into multiple poisons such as glycolaldehyde and oxalic acid. These toxins are much more poisonous than ethylene glycol and can be long-lasting in the body, affecting the dog over a long period of time. The toxins have a variety of effects, from blindness to kidney disease.

What are the symptoms of antifreeze poisoning in dogs?

Stage 1: The first poisons to be produced start to affect and damage the brain in a similar way to alcohol in people, so animals may appear drunk and unstable in the initial stages.

Stage 2: With more time, the poisons affect the chemistry of the bloodstream and internal organs, and so lots of processes around the body start to go wrong.

Stage 3: The final stage happens as the poisons are filtered by the kidneys. Passing through, they start to damage them and are converted again to form sharp crystals called calcium oxalate. Calcium oxalate rapidly causes severe kidney failure by physically and chemically destroying the cells of the kidney as they pass through.

What should I do if my dog has drunk antifreeze containing ethylene glycol?

Any intake of ethylene glycol is potentially dangerous and should be taken seriously as an emergency. Rapid action and seeking the right help will give your dog the best chance of a good outcome. The lethal dose of ethylene glycol in dogs is believed to be around 2 ml per pound of bodyweight, but, as it is usually impossible to know exactly how much has been consumed, it is better that all situations are taken seriously. Cats are even more vulnerable, with the lethal dose being around 0.25 ml per pound bodyweight. Don’t panic, but act quickly.

What treatment might my dog need after swallowing antifreeze?

The information you give about what your dog has swallowed and any symptoms you have seen will be the first stage of the investigation for your veterinary clinic. The veterinarian will then give your dog a thorough check-over and perform lab work to usually include a blood and urine sample. It is vital to establish what stage of poisoning your dog may be suffering. Symptoms, changes in the blood and kidneys, and any production of calcium oxalate crystals in the urine will all give important clues. The sooner this is established, and treatment is started, the better the chances of a good outcome for your dog, so don’t delay in seeking help!

If your dog has only just ingested the antifreeze (within the last couple of hours), and is still well otherwise, then the veterinarian can give a powerful injection to make them vomit it back up and reduce any further absorption. You should not attempt this at home without instructions from a veterinarian, as you can make the situation worse.

If the antifreeze has already been absorbed, then your dog will likely need to be hospitalized so that they can be put on a drip. This will allow the clinic to try to dilute the toxins and flush them out through the kidneys to prevent further damage. If your dog is starting to suffer from kidney failure, then intensive care is needed to try and flush the kidneys and get them restarted.

The further through the poisoning your dog has progressed, the harder it will be to treat the problems that antifreeze causes. All cases of antifreeze poisoning have the potential to be fatal, but this is more likely as time goes on and the poisoning gets worse. The best outcomes are when the problem is identified and aggressively treated at an early stage.

Is there an antidote to ethylene glycol poisoning in dogs?

When your dog first drinks ethylene glycol, there is the possibility of using an antidote. There are two antidotes for ethylene glycol- fomepizole and ethanol- but they are only effective in the very early stages. These antidotes work by keeping the body’s enzymes busy so that they can’t accidentally convert ethylene glycol into the toxic compounds. The ethylene glycol can then be passed out of the body before it can be converted into the oxalic acid. Therefore, if the poisons have already been produced, then these antidotes for antifreeze poisoning in dogs will not help, and other methods, such as being put on a drip, will be used.

I’m not sure if my dog drank antifreeze, or if the type is toxic- now what?

If antifreeze is a possibility but you aren’t sure whether it contains ethylene glycol, it can be difficult for your veterinarian to diagnose with complete confidence. There is no exact test for antifreeze poisoning in dogs. Some types of antifreeze will glow under UV light, so this is worth a try at the clinic. Changes in your dog’s bloodwork can be suggestive of antifreeze ingestion too. Crystals in the urine mean antifreeze poisoning is likely, but by the time these are produced your dog is very ill and may not survive.

What types of antifreeze are safe for my dog?

If you’re using antifreeze at home, it’s a good idea to find a pet-safe one. There are no entirely safe types of antifreeze but the safer ones include those that have a bitter taste added (so they are less appealing), or those that are based on Propylene glycol (a safer alternative to Ethylene glycol).

Why is there ethylene glycol in my dog’s medicine?

You may see either ethylene glycol or propylene glycol listed as ingredients in some liquid drugs, foods and other regularly available products for dogs. Don’t panic- they are common types of solvent for other products and are used at very low concentrations (under 10%) which are not dangerous. Antifreeze contains ethylene glycol at much higher concentrations (95%), which is far more dangerous. The body can safely process very small amounts of Ethylene glycol in the same way it gets rid of alcohol, and problems only occur when these processes are totally overwhelmed.

Antifreeze and Dogs: In Conclusion

Dogs are attracted to the sweet taste of antifreeze products containing Ethylene glycol, but this chemical is extremely poisonous as it is converted in the body to a variety of other toxins. After ingestion, your dog will be more and more affected by these toxins and unfortunately, the poisoning can end in death. It is vital to seek professional veterinary help as soon as possible in order to give your dog the best chance of a good outcome, but every case of antifreeze poisoning is very serious and potentially life-threatening. Look for pet-friendly antifreeze and try to avoid use where possible.