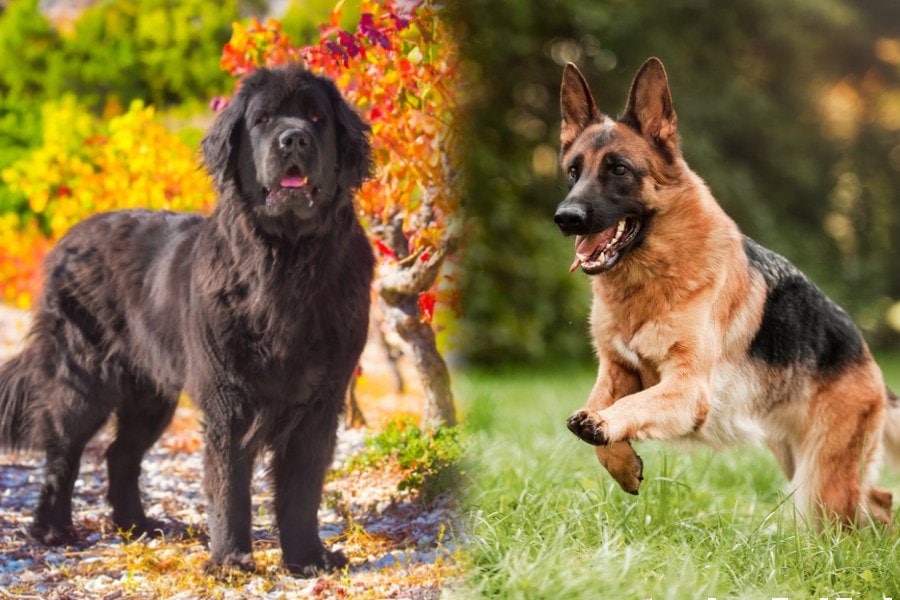 The New Shep is a cross between the German Shepherd and the Newfoundland breeds. German Shepherds are part of the Herding Group and are known for their courage, loyalty, and protective nature. The Newfoundland is in the Working Group and are also known for their loyalty and courage and are very sweet and affectionate. Combine these two breeds, and they create the friendly and energetic New Shep.

The New Shep are very large dogs with an average weight of about 150 pounds. The color range is wide where they can be black, brown, blue, red, sable, white, cream or silver. Both the Newfoundland and the German Shepherd have a thick, soft undercoat and a coarse, short or medium-length outer coat. The New Shep might have a variation of fur and color.

The New Shep are energetic yet laidback dogs. Because of their size, they require extensive walking, but they will do equally well with playing in the water or running after balls in the backyard.

They are quite trainable due to their intelligence, but you do need to be aware that they might have a bit of a stubborn streak. They tend to be healthy and with the average lifespan of a large breed dog of about 10 years.

While they are friendly with everyone they meet, there could be some minor aggression issues with dogs of the same sex.

The price for New Shep puppies could run from $500 to $1500; however, at the time of the writing of this article, there were no New Shep puppies for sale online. The price range is an estimate and a reflection of fees from adopting a dog or puppy from a rescue society as well as from breeders selling puppies, usually at a higher price.

3 Little-Known Facts About the New Shep

1. The New Shep is easily trained but has a stubborn streak.

They are easily trained due to their high intelligence, and they become engaged when fully occupied. Consistency is critical because of their slightly obstinate nature.

2. The New Shep is friendly with strangers.

They make excellent watchdogs partly due to their large size but also because of their protective nature. However, they are generally friendly with people not part of the household.

3. The New Shep tends to be larger than their parents.

The Newfoundland is larger than the German Shepherd can weigh up to 150 pounds. Some New Shep dogs can actually weigh up to 200 pounds.

Temperament & Intelligence of the New Shep

Overall, the New Shep are highly intelligent dogs that are confident, patient, loyal, and loving. They are equally trustworthy with children of all ages as they are with people not part of the immediate family. While their large size might be intimidating for most people, they are generally approachable dogs.

The New Shep makes a fantastic family dog. The Newfoundland has a sweet and patient disposition, which softens any aggressive tendencies that are sometimes found in the German Shepherd. Many large breeds need to be supervised with young children (primarily due to their large size and boisterously knocking the little ones over), but the New Shep is a calmer dog than most and has a tremendous amount of patience with small children.

Like most dogs, the New Shep will get along very well with household pets if they are properly socialized when they are puppies. While they will have positive interactions with other pets within the household, they are wary of other dogs, particularly dogs of the same sex. They will approach most dogs in a friendly manner but be aware that there is the possibility of aggression.

Things to Know When Owning a New Shep:

The New Shep is a large dog and requires a diet designed for large breeds. They should be fed about 3 cups several times throughout the day with a high-quality kibble. As always, talk to your vet if you’re concerned about weight gain or any other health issues that might arise.

They should have a 60-minute walk every day, but the laidback New Shep could handle shorter walks and play. Because of their large size, they will not be as suitable for apartments, but they love being in the water, which will allow them to burn off some of their excess energy.

The New Shep can be obstinate at times, but with persistent and reward-based training, they have the ability to become search and rescue dogs and might do well in advanced obedience training and agility trials. The Newfoundland part of the New Shep makes them excellent at water sports, hauling (such as sleds or small carts) and they have the potential to become exceptional therapy dogs.

The thick undercoat of both of the parents of the New Shep means it will be necessary to brush your dog on a daily basis. The undercoat tends to be dense and will be prone to tangles and matting. Particular attention should be paid during the spring and the summer when they start shedding.

You should only bathe your dog when it’s necessary to remove debris and dirt and with an appropriate dog shampoo. Dog skin differs from human skin and using the wrong shampoo might create skin problems for the dog.

The ears of the New Shep might be erect like the German Shepherd or folded over like the Newfoundland. The ears should be cleaned regularly, but especially if your dog’s ears are floppy. Trimming the nails and brushing your dog’s teeth are also necessary grooming habits.

The German Shepherd is prone to hot spots, skin allergies, cataracts and perianal fistulas. The Newfoundland is also susceptible to cataracts but also abnormal eyelid and lower eyelid droop.

The vet will run allergy, skin and eye tests to screen your dog for any possible inherited health conditions from its parents.

Your vet will run hip, elbow and cardiac tests as well as DNA tests and a full physical exam on your dog. Your New Shep is a hybrid, which means it might inherit some of these conditions from its parents, but it is less likely.

Obviously, female and male dogs also differ biologically. If you decide to have your female dog spayed, the surgery is a little more challenging than neutering the male dog. This comes at a slightly higher expense and a longer recovery time for the dog.

Some believe that there are personality differences between males and females. Generally speaking, males are thought of as being more aggressive than females. In contrast, the females are thought to be more affectionate. However, there are debates on this subject.

The most important thing to consider in the male versus female dog debate is that the primary source of their personalities will come from how you train and socialize them when they are puppies.

When you combine the intelligence and the energy of the German Shepherd with the calm and affectionate Newfoundland, you might just end up with the perfect dog for your family. The New Shep is a beautiful, large dog that loves the water and will make an excellent watchdog but without the aggression.

New Shep puppies are not easy to find so you might want to begin by speaking to breeders of German Shepherds and Newfoundland dogs. Attending dog shows and talking to rescue societies as well as local and national dog clubs could also prove helpful. Last of all, posting messages on social media will help you spread the world to a much bigger audience.

The New Shep requires a fairly vigorous brushing routine, but otherwise, you will end up with a loyal and loving gentle giant that will become a beloved member of your family.