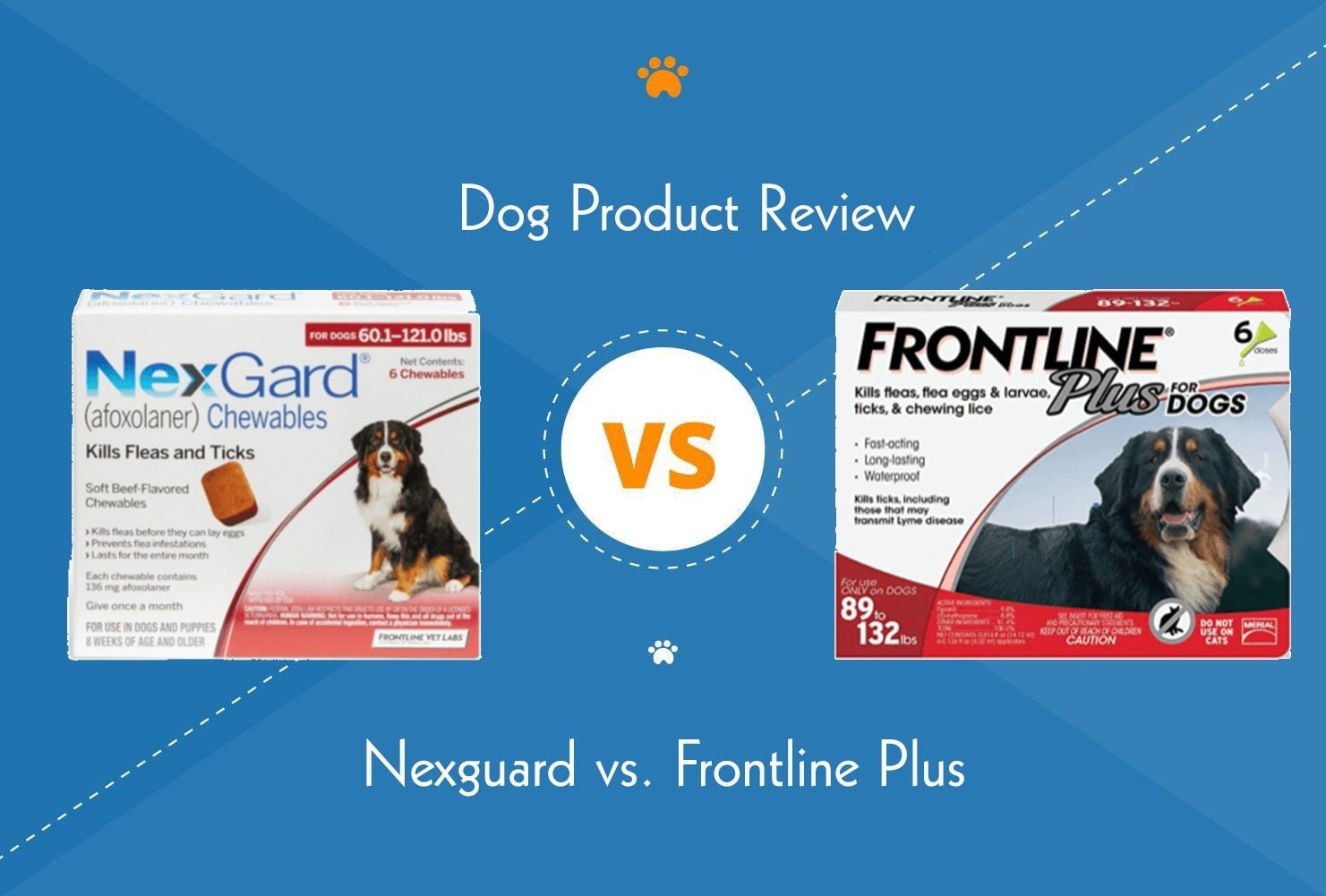 If you’ve ever shopped for flea and tick treatment, then chances are that you’re already familiar with Frontline, as it’s one of the most popular options on the market today. But there’s another treatment launched in 2013, called Nexgard, that might be worth your consideration. So what’s the difference between Frontline vs Nexgard?

The main reason Nexgard is so attractive to many dog owners is that it’s administered orally, so there’s no need to deal with messy topical applications. As a result, it tends to be more convenient for most owners.

However, it’s also more expensive and is available only with a vet’s prescription, so getting your hands on some may be a bit of a pain.

Both products roughly equal in terms of effectiveness, even though they have different active ingredients, so unless you’ve just got your heart set on an orally-administered flea treatment, we think Frontline will likely be your best bet.

A Sneak Peek at the Winner: Nexgard

Nexgard vs Frontline: What Are the Differences Between Them?

The primary difference between the two treatments is the method of application, but there are a few other distinctions worth noting.

Frontline comes in little plastic vials filled with liquid; to apply it, you break open the vial, part your dog’s fur to expose their skin, and rub the liquid directly onto the exposed surface. The whole process only takes a few seconds, but if your dog tends to squirm, putting it on can turn into a bit of a rodeo.

Also, there’s the possibility that you may get it on your skin during the application process, which may pose a risk to pregnant women and individuals with certain conditions.

Nexgard comes in a chewable, beef-flavored tablet, so all you have to do is open the package and offer it to your pup. This is obviously less difficult — provided your dog eats it, that is. If not, you’ll have to hide it in some peanut butter or find some other method of disguising it.

The main downside to using a chewable tablet is that you’ll have to store it somewhere your dog can’t reach, because they’ll likely eat as many as they can get their paws on. It’s been shown to be safe at up to five times the recommended dose, and there are only three doses per package, so you should be safe, but we prefer not to take any chances.

What Are Their Active Ingredients?

Frontline uses three ingredients, Fipronil, S-methoprene, and Pyriproxyfen, whereas Nexgard only has one, Afoxolaner.

They’re roughly equally effective in terms of killing fleas, as both can wipe out 99% of an existing infestation after a single treatment. Both are capable of killing eggs and larvae, as well as full-grown parasites.

Frontline tends to work a bit faster, as it gets into the bloodstream more rapidly, but you should see results from both within 24 hours.

We should note that a recent study has indicated that Fipronil, one of the active ingredients in Frontline, may lose efficacy with continued use, so that’s something to take into consideration. It’s just one study, though, and many people have used Frontline for years with continued success.

Also, insects can develop a resistance to a pesticide that they’ve been exposed to for a long time, and Frontline has been around much longer than Nexgard. However, Frontline is continually tweaking their formula and developing new strategies to combat fleas, so this may not prove to be much of an issue.

Neither one contains any ingredients designed to repel fleas.

The answer to this question is the inverse of the answer given for fleas, which is to say that both are equally effective at killing ticks, but in this case, Nexgard kills them quicker. Nexgard can eliminate the little bloodsuckers in just eight hours, whereas it takes 24-48 hours for Frontline to work.

That’s not a huge difference, but the additional time may be enough for disease transmission to occur. Then again, your dog may be able to catch a tick-borne disease in eight hours just as easily as they could in 48.

Neither one will repel ticks.

Both should be safe for your pooch, although only Frontline has been approved for use on pregnant or lactating dogs.

Also, while both went through extensive testing before being released to the public, Frontline has been around for longer, so there has been more time for any potential issues with it to come to the surface. Nexgard has only been available since 2013.

They both have occasional side effects, as Frontline can cause skin irritation and Nexgard may cause an upset stomach or vomiting. Both are generally gentle, however, and neither are as likely to cause side effects as Seresto, for example.

Neither one is toxic to cats, but Nexgard is only intended for use on dogs, whereas Frontline has a formula specially designed for felines.

On average, Frontline tends to be significantly cheaper than Nexgard.

That’s just for the medicine. Since Nexgard is only available via prescription, you’ll also have to pay for a vet visit at least once.

Each medicine will protect your dog for 30 days per dose. Both are designed to be waterproof, but obviously, Nexgard is probably a little better in that regard (unless your dog drinks tons of water).

Nexgard may be relatively new, but it’s developed quite a following in just a few years. That’s largely due to the convenience factor, but that’s certainly not all this medicine has going for it.

You can find Frontline just about anywhere, as it’s one of the most ubiquitous parasite treatments out there. That doesn’t mean it’s not effective, however.

What the Users Say

Reading the literature behind a medication is an excellent way to get a better understanding of its risks and benefits, but doing so will only provide you with a partial picture. That’s why we believe in examining what real users have to say about it, as they often encounter issues that doctors and researchers never anticipated.

Nexgard users love how convenient it is to just hand your dog a pill, although some have indicated that their mutts don’t care for the tablet’s taste. Some tablets get hard and difficult to chew, especially if they’ve been sitting around for a long time, so it’s important to store yours properly.

Frontline users appreciate being able to take out a flea or tick problem with a single dose of affordable medication, and they report seeing results quickly. No one enjoys putting it on their dog, however, and many people worry about the effects of getting it on their hands after petting their pups.

One thing that users of both products complain about is finding new parasites on their dogs. This could be the result of many things, but it’s likely that many people are under the mistaken impression that these medications will prevent future infestations.

They won’t because that’s simply not how they work. There’s nothing in either treatment to prevent a flea or tick from jumping on your dog. However, once those insects bite your pup, they’ll get a dose of the medication, killing them in just a few hours. If your dog has bugs that don’t go away after a day or two, then it’s time to worry about the efficacy of your treatment.

Ultimately, the bulk of user feedback indicates that you’ll likely experience similar effects from both treatments. At that point, it’s simply a question of which application method you prefer — and how much that preference is worth to you.

If you need an effective flea and tick treatment for your dog, you really can’t go wrong with either Frontline or Nexgard. They’re similar in terms of effectiveness, and both should be capable of completely wiping out any parasites your dog has tagging along.

There are a few key differences to be aware of, however. Nexgard will kill ticks a bit quicker than Frontline does, but Frontline is both less expensive and easier to get your hands on. Of course, Nexgard should be easier to apply, given that it’s a chewable tablet (assuming your dog will eat it, that is).

Ultimately, both treatments should work for most owners. We tend to recommend Frontline a bit more, only because it’s significantly cheaper. However, if money’s no object and you’re really opposed to rubbing oil on your dog’s skin, Nexgard will work just as well.

Can Dogs Eat Jicama? Is Jicama Good for Dogs?

What Kind of Dog is Lassie?