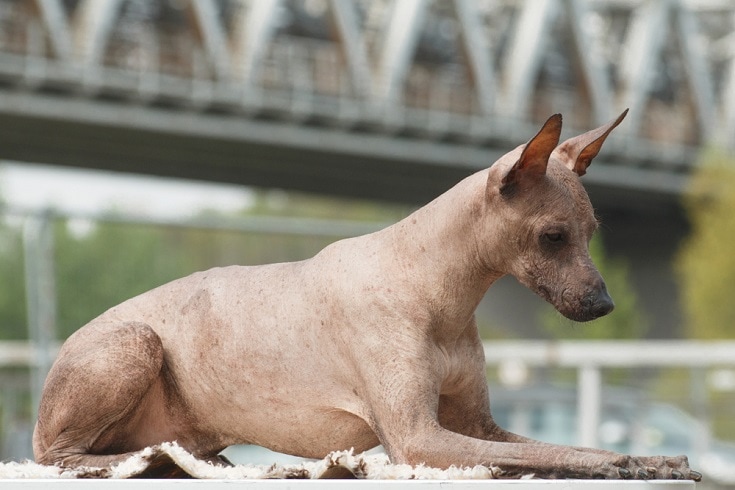 The Peruvian Inca Orchid dog is a mostly hairless breed that was developed in Peru. They can be coated as well, but this is rarer. The hairless variety is more popular in the United States. They come in three different sizes – small, medium, and large. However, crossbreeding between different sizes isn’t absolutely uncommon and there is a blurry line between the different sizes. It is not like poodles, for instance.

These dogs were bred to be awesome hunters, but they are used largely for companionship. They do great with agility, rally, and lure coursing today – even if you don’t want to compete. This can be a great way to wear them out, as they are a bit energetic.

Their skin can come in a variety of colors, as can their coat. They can be black, brown, gray, pink, tan, and white.

Peruvian Inca Orchid dogs are basically sighthounds, like Greyhounds and Whippets. They have the same body shape as these elegant canines. Their size ranges a lot. Technically, they come in three different sizes, but all sizes are basically the same. The only difference is how big they are. The smallest might stand at under 10 inches, while the largest might be 26 inches tall.

One of their distinguishing features is that they are hairless, of course. Their skin is delicate, which means they need some unique care when compared to other dogs. Their skin can be a solid color or it can be spotted. Sometimes, it isn’t pigmented at all.

The hairless and coated varieties can occur in the same litter. They aren’t completely different strains and act very similar. Really, there is not difference between them besides their appearance.

These dogs are slim and elegant. They are speed in dog-form. Overall, these dogs are typically affectionate and loyal at home. They can be a bit wary of strangers and may make good watch dogs. However, when socialized from an early age, they should not be aggressive in the least.

It depends on the size. Smaller dogs are cheaper because it requires less money to bred them. Smaller dogs need less food and room, which means that breeders can keep their costs low. Typically, their savings are passed on to you.

Larger dogs typically cost more because the pregnant female requires more food and room. However, these dogs still tend to be inexpensive. They usually cost between $600-$800.

There are quite a few breeders in the United States, so you can shop around for a better price if need be.

1. While they are hairless, most Peruvian Inca Orchid dogs have small patches of hair.

These patches are usually on their head, extremities, and tail. Some dogs have more hair than others. You won’t know how much hair they have until they reach maturity.

2. These dogs are ancient.

Pre-Inca pottery portrays this breed in great detail, so they are likely thousands of years old. Of course, we do not have an exact date for their existence.

Around their friends and family, these dogs are quite social and friendly. However, they are not the most sociable animals and require extensive socialization from an early age. They should be kept in the house, as their delicate skin can easily be harmed outside.

They are very intelligent, which means that they typically pick up on training pretty early. However, they are pretty stubborn, so they are difficult to train. They aren’t particularly food motivated either, so treats do little to help this situation.

These dogs come in a wide range of temperaments. Some that were bred to be companion animals are very docile and more sighthound-like than other animals. However, some dogs are bred more for guarding purposes and tend to be more feral. There are different strains out there, but they are not well documented or officially recognized.

They are great for families with older children. They tend to stay indoors, so they’re great for families who don’t spend much time outdoors. They do require a bit of work. For example, they need sunscreen when going outside and may require lotion in some circumstances. They also need some early socialization and training, which will require some time commitment.

They are not recommended for families with smaller children because they are not very patient. They do not prefer rough play, which many children seem to prefer.

Do Peruvian Inca Orchids Get Along with Other Pets?

Things to Know When Owning a Peruvian Inca Orchid

Peruvian Inca Orchid do not have any particular health needs. Because they have sensitive skin, they may be particularly sensitive to sun and the elements. They may need a food that is high in omega fatty acids to improve their skin health.

Besides that, though, these dogs are not particularly unhealthy and do not need any specific foods to stay healthy. They can eat any high-quality, commercial dog food. Most of these contain extra omega fatty acids, so as long as you choose a quality food, your dog’s skin should stay healthy.

This breed was bred for function, not necessarily form. Because of this, they require quite a bit of exercise. They were bred to work, whether they’re hunting or guarding. Preferably, you need a fenced-in yard. Otherwise, you will need to take them on several walks each day.

Exercise can come in the form of inside activities too. These dogs are smart enough for things like hide-and-seek and or learning new tricks. Active tricks are a great way to train these dogs, since they love exercise and action.

If you live in a small apartment, this might not be the best dog for you because of their activity level. However, you can make it work if you take your dog on extensive walks regularly. They also like training for things like agility, obedience, and rally.

These dogs need a lot of socialization. They are not outright aggressive, but they do have guarding tendencies. They are not the friendliest dogs out there. However, they were not bred to be companion dogs until recently, so this is to be expected. You can get around their nervous tendencies by socializing them early and often.

This bred is very intelligent. This makes them able to learn a lot of different commands. However, this doesn’t mean they’re easy to train. Often, they have a mind of their own. They can be a bit stubborn and do not always listen to their owners.

They have a wide range of temperaments because they are a primitive breed. They were not bred to have a certain temperament, as they were used for a variety of different jobs. Because of this, some are easier to train than others. It really just depends on the breeder and the parents of the dog.

These are not outside dogs. They require sunscreen on sunny days because of their sensitive skin. However, because they do not have any hair, they do not require brushing or anything like that. They will need a bath occasionally to keep them clean, as they don’t have a self-cleaning coat that most dogs have.

Like many dogs, these canines need their nails clipped regularly. You can do this yourself or take them to the groomers. Most have walk-in services that will clip your dog’s nails for very cheap. Because these canines don’t have hair, they will likely not need to visit the groomer for any other reason.

Their ears should be checked regularly to avoid ear infections and a build up of wax. This can lead to infections if left for too long. Their teeth will need to be brushed as well.

These dogs are generally pretty healthy. They were bred for function, so the healthiest dogs often produced the most puppies. Over time, this led to a very healthy breed. Most of their problems come from their lack of fur, but many problems are avoidable if their skin is taken care of properly.

These dogs are incredibly easy to recognize. They have no hair in most circumstances, though some coated varieties do exist. They are not exactly “family dogs”. However, they are suitable for families with older children if they are socialized and trained from an early age.

They are loyal and very energetic. They love playing games like hide-and-seek due to their high intelligence and activity level.