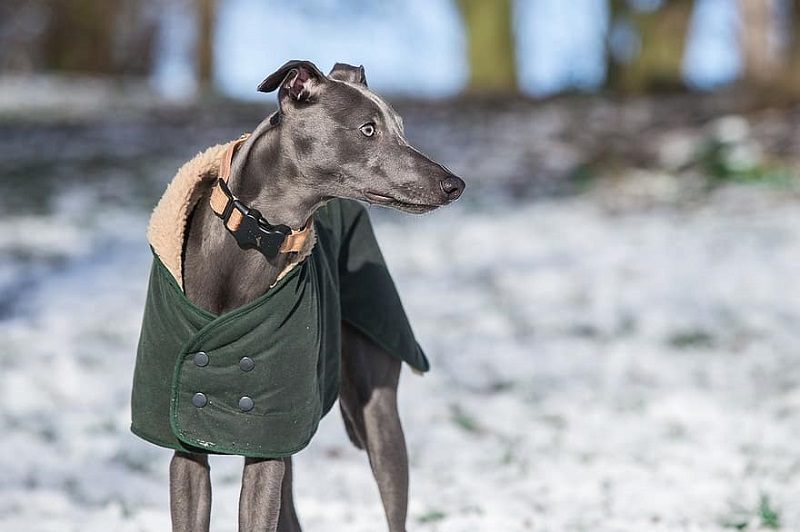 Streamlined and agile, the Whippet is a quick-moving hunter that’s fast enough to outpace wily prey such as rabbits and other small game. They look like miniature and greyhounds and move just as quickly. This helps them to be top competitors in many canine sports such as agility, rally, lure coursing, flyball, and even obedience.

You might expect such a speedy dog to be high energy, but Whippets are actually pretty calm and reserved. They’re friendly and loving, making them excellent companions. Plus, they’re low-energy enough to make good apartment pets, especially since they rarely bark, if ever. However, this also means they’re not good watchdogs.

Be sure not to leave your Whippet at home alone for too long. They’re incredibly affectionate companions and they don’t want to be away from their people. They’re prone to separation anxiety and can develop destructive behaviors if you leave them alone for long periods.

Whippet Puppies -Before you get One

1. Their Nickname is the “Poor Man’s Greyhound”

If you saw a Whippet and didn’t know what it was, you’d be forgiven for mistaking it for a small greyhound. They look so similar to the iconic racing dog that the Whippet was given the nickname the “poor man’s Greyhound.”

But the similarities don’t stop at looks. Just like the Greyhound, the Whippet is an incredibly fast and agile canine. They excel at canine sports and are still used for hunting as well where their incredible speed and agility are used to chase down and catch small game.

2. They’ll Chase Just About Anything

Bred to be hunters, it makes sense for Whippets to chase small creatures. But this breed will chase more than that; they’ll chase pretty much anything. Once it was discovered that they would chase a red rag, people began racing Whippets for entertainment!

3. They’ve Been Known to Kill Cats

Hunting is so deeply embedded in the Whippet’s genes that they still have a very strong prey drive today. It’s so strong that they’ve been known to kill cats that live in their household. They seem to be able to get along with other dogs, but cats initiate their prey drive and it’s not pretty when it happens. If you have cats, you’re better off choosing another breed.

Temperament & Intelligence of the Whippet 🧠

Though fast and agile while hunting, the Whippet is a calm and relaxed dog. This breed is quiet and reserved, rarely barking or making much commotion. They’re also very gentle and affectionate with their family.

On the other hand, they love to chase things and will run after just about anything that moves. Unfortunately, they can chase prey for miles, so if yours starts to chase, you may have a hard time catching up!

Because they’re so calm and quiet, Whippets are well-suited for apartments. They don’t require too much space, provided that you supply sufficient exercise each day.

Are These Dogs Good for Families 🏡

Calm and not too excitable, Whippets make great companions for entire families. They’re great with kids who they tend to bond closely with. But they’re not suitable as outdoor dogs. They want to remain inside with the family.

If you’ve already got other pets, then a Whippet might not be the best choice of dog for you. They’ve got a very high prey drive that can cause them to attack other animals in the household. Though they have been known to generally get along with dogs, even with socialization they don’t usually do well with cats.

Things to Know When Owning a Whippet:

Whippets are small to medium-sized dogs and they don’t require too much food. They do well on high-quality dry dog food. Usually, a Whippet will eat between 1-1.5 cups of dry food in a day. You can divide this up into two feedings; once in the morning and once in the evening.

Though Whippets aren’t an overly energetic breed, they still need to get plenty of exercise or they can become destructive and misbehave. For this breed, about 30-60 minutes of exercise each day should be good. It’s even better if they have a yard they can run around in to release any extra energy they might have, but it’s not necessary.

Don’t be surprised if your Whippet’s spurts of energy for exercise or playtime are short-lived. They have the energy they need to chase and capture small animals, but they don’t generally expend too much energy past this initial burst.

Whippets are highly intelligent dogs with a background in hunting. They’re good at taking instructions and are smart enough to learn all the commands.

You’ll find these dogs excelling at obedience training, but they do have a bit of an independent streak. To train a Whippet, you’ll need a firm hand and probably a bit of previous dog-training experience.

More than just obedience, Whippets have proven to be winners at a variety of dog sports. They learn quickly and follow instructions well, which helps them when performing these sports. But they also have agile, fast bodies that help them blast through agility courses and more at high speeds.

Though they shed an average amount, the Whippet needs a below-average amount of grooming and maintenance. They hardly even need to be brushed since their coat is so short.

To keep it looking shiny and healthy, just give your Whippet a good rub down with a damp chamois. Bathing should only be done when necessary, which should be rarely since their coat is naturally pretty much odor-free.

Generally speaking, purebred dogs are susceptible to quite a few health concerns. But the Whippet doesn’t subscribe to this rule. Overall, it’s a very healthy breed, though there are a few rare conditions that can occasionally pop up, even if they’re not commonplace.

Male Whippets seem to be a bit more loyal than the females who are often more strong-willed. They also like repetitive play, making them a great choice for families with kids. The females are still devoted to their owners, they’re just a bit more independent.

With looks that earned them the nickname of the poor man’s Greyhound and an agile body with similar capabilities, the Whippet is a top-performer at dog sports, agility, and even obedience. They’re very trainable, intelligent dogs, though they can sometimes have an independent side.

The Whippet was trained for hunting and they have the physical abilities and desire to chase down small prey. They’re not great for families with other pets, particularly cats. But despite their high prey drive and short bursts of high energy, Whippets are a relatively calm breed that’s usually pretty low-key and relaxed.

These dogs are great family companions and even do well in apartments. Though they need about an hour of exercise each day, they don’t need a lot of space to run around since they’re not very energetic dogs. Whippets also don’t bark much, another trait which helps to make them well-suited for apartment living.