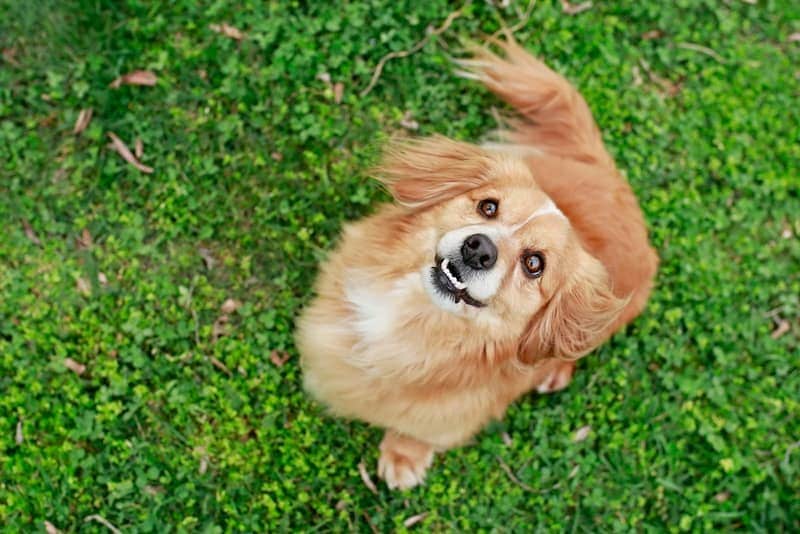 A tiny dog with a giant personality, the Pom Terrier is the embodiment of “small dog syndrome.” This breed is bold like a big dog stuck in a little dog’s body. They’re adorably cute, with a puffy coat and the high-energy antics of a terrier.

At most, these dogs weigh about seven pounds. The average weight is about five pounds, though they can reach about a foot in height. They’re a mix between the Pomeranian, an affectionate and cute dog of small stature, and the Toy Fox Terrier, a bold and energetic dog with a tiny size and a tough personality underneath.

When combined, you get the Pom Terrier; a lapdog with a courageous personality, plenty of spunk, and an adorable exterior that endears many to them based on looks alone. But there’s plenty to like in the Pom Terrier’s personality as well. They’re loving and affectionate, looking to be a part of everything their humans do.

This Pomeranian Terrier mix won’t want to be left alone. They prefer to go everywhere with you. Luckily, they’re small enough to make an easy go-everywhere companion. Plus, they’re great for apartment dwellers who want the companionship of a canine but don’t have the space for a larger-sized pup.

Pom Terrier Puppies – Before You Welcome One Into Your Family…

1. They Don’t Do Well in Cold Climates

Pom Terriers don’t have a particularly thick or long coat, especially if yours happens to take more after the Terrier side of the family tree. In that case, they’ll have a short coat like the Toy Fox Terrier does.

But even if they have a bit longer of a coat from the Pomeranian side, they still won’t be well-suited for cold climates. You’ll want to give your dog a coat if you’re anywhere too chilly.

2. They Inherit A Strong Prey Drive from The Terrier

That drive to hunt doesn’t breed out easily. Even when mixed with the Pomeranian, which was bred as a companion dog in Europe, the prey drive can still be quite strong in a Pom Terrier.

Luckily, this is something that can be easily cured if you train and socialize your Pom Terrier often, and from a young age.

3. Their Hairy Ears Can Lead To Ear Infections

Pom Terriers have very hairy ears. Not just on the outside, but on the inside as well. This can cause dirt, dust, and more to get trapped in their ears. If left unchecked, this can develop into an ear infection, which could get serious.

Because of this, you’ll want to clean your Pom Terrier’s ears regularly. You’ll need to wipe the inner ear out to remove the build-up. You can do this with a damp cloth, taking care to dry the area thoroughly once you’re finished.

Temperament & Intelligence of the Pom Terrier 🧠

The Pom Terrier is the ultimate case of a small dog that thinks it’s a big dog. It makes sense though. When you look back at the Pom Terrier’s lineage, both parents were bred from much larger groups of dogs originally.

These dogs are also very people-oriented. They want to be with you all the time and will resent being left home alone. They’re best for people who like to include their dog in just about everything they do, or for households where someone is almost always home.

Pom Terriers are also known for being very clever, smart dogs. This can help them when it comes time for training, but their sometimes stubborn nature can get in the way.

If you want a high-energy dog that’s always ready to play and loves to perform goofy antics to get your attention, then the Pom Terrier is a good match for you.

Pom Terriers are generally good family pets. They can do well with children, as long as the kids know how to behave with a dog. If the kids hurt or scare the Pom Terrier, it might react out of fear, though they’re not aggressive dogs by nature.

Once they get to know the children, they’ll form close bonds with them and grow together as they each mature.

Pom Terriers can get along well with other pets as long as they’re socialized early on. Because they have a natural prey drive from the Terrier in their genes, they might not do so well with other small pets if they’re not socialized properly from a young age.

Things to Know When Owning a Pom Terrier:

Pom Terriers are very small dogs, so they don’t need to eat much food. Because of their small stature, they’re easily overfed. This can lead to weight gain and a generally unhealthy dog.

Be sure to monitor your Pom Terrier’s food intake to ensure that you’re not feeding them too much. About one to one and a half cups of high-quality dry dog food each day should suffice. More than that and you’ll risk making your dog unhealthy and overweight.

Pom Terriers have tons of energy, and it’s your job to help them get it out through exercise, playtime, and training. Each day, you’ll need to provide 60 minutes of exercise to keep your Pom Terrier healthy and happy.

A long walk is a good place to start. Structured playtime is also a great way to exercise your Pom Terrier, and it can be done inside since they’re so small.

This breed is very intelligent. That doesn’t mean they’re easy to train though! They can definitely learn the commands, but you’ll have to make it fun for them because they can get very temperamental if you let them get bored.

Worse, they can also get pretty stubborn at times. A firm hand that shows them who’s in charge and plenty of positive reinforcement to make the training fun can both help to make training go smoother with a Pom Terrier.

If your Pom Terrier inherits a coat that takes after the Terrier side more, then you can expect very little in the way of grooming. An occasional brushing to remove loose and dead hair should suffice.

On the other hand, your Pom Terrier could show more of the Pomeranian side in its coat. In that case, you’d need to perform much more regular brushing to keep their longer coat from getting tangled and matted.

No matter which type of coat your Pom Terrier has, you’ll want to be sure to keep their ears very clean. As mentioned before, they have very hairy ears that can trap dirt and cause infections.

Be sure to clean their ears regularly with a damp cloth to prevent an infection from occurring.

There are a few health conditions that the Pom Terrier’s parents suffer from that you’ll want to keep an eye out for in this hybrid breed:

Patellar luxation: This is a kneecap that’s able to move out of place, and it’s one of the most common reasons for lameness in dogs. Toy breeds are most susceptible to this condition, so it makes sense that it’s a common health concern for Pom Terriers.

Hyperthyroidism: When your dog’s body produces too much of the thyroid hormone and their metabolism climbs to unsafe levels, it’s called hyperthyroidism. It can be a fatal condition for dogs, and it should always be taken very seriously.

Legg-Calve Perthes disease: This condition is when the head of the femur that fits inside of your dog’s hip socket begins to deteriorate. Eventually, this will cause the hip to collapse, with arthritis to top it off. It’s most commonly seen in dogs under 20 pounds and will first be noticed as limping.

Von Willebrand’s disease: In humans and dogs alike, this disease is the most commonly inherited bleeding disorder. In your dog, it can cause spontaneous hemorrhaging and prolonged bleeding.

Ear Infections: These are caused by dirt being trapped in the hair in your Pom Terrier’s ears. You can easily avoid this by properly cleaning their ears on a regular basis.

Cataracts: If you see your Pom Terrier’s eye start to get cloudy and opaque, it’s likely a cataract. Left untreated, this can result in blindness. But there’s a surgical procedure that is very effective at removing the cloudiness and returning eyesight to the affected dog.

While most breeds show some obvious physical differences between males and females, the Pom Terrier is one of the rare breeds that don’t. Both sexes can weigh the same three to seven pounds, and both can reach a maximum height of 12 inches with neither tending to outsize the other.

Pom Terriers have been growing in popularity, and there’s a good reason for this. They make excellent companions, with personalities that are several times the size of their very small bodies. But that small stature brings some advantages of its own. For instance, the Pom Terrier is one of the best dogs for apartment dwellers specifically because of its smaller size.

These are loving dogs that will trail you around everywhere you go, but they don’t want to be left alone. In fact, they’d prefer to go just about everywhere with you, never leaving your side.

Though they might not need much space, two things that all Pom Terriers will definitely require are exercise and attention. Make sure that you can provide ample amounts of both before adding one of these spunky, fun-loving pups to your family.