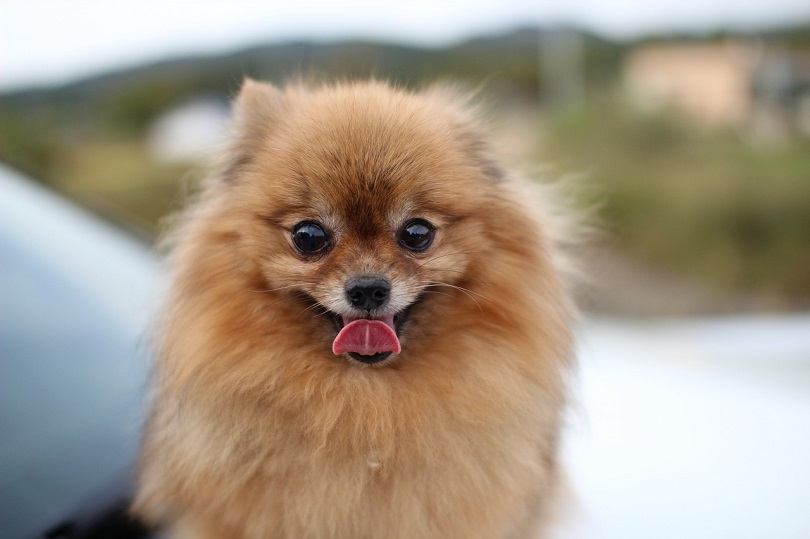 Pomeranians are one of the most popular dog breeds today, even comparable to Labradors and other famous breeds. These little Spitz-type dogs are companion-type dogs with energy that seems to never run out, making them a popular choice for families as well. Though they may be small, Pomeranians have giant-sized personalities that they proudly display. Always on the alert, Pomeranians are big watchdogs in tiny bodies. Let’s take a closer look at this adorable lapdog and what it takes to own a Pomeranian:

Pomeranian Puppies – Before You Buy…

What’s the Price of Pomeranian Puppies?

Pomeranians are purebred dogs that are always in demand, so it’s no surprise that they can be costly. A purebred Pomeranian can cost anywhere from $500 to upwards of $6000, with an average price of around $750 per puppy. Factors like genetics, lineage, and physical attributes can influence the final price. Pomeranians bred for certain physical characteristics or breed competitions will be more expensive than, say, Poms bred for companionship. Regardless of the price, it’s important to find a reputable Pomeranian breeder and to avoid “backyard” or “fashion” dog breeders.

Pomeranians have three facial variations: teddy-bear face, fox face, and baby-doll face. Each variation has a specific set of characteristics that give them the “fox”, “teddy-bear”, and “baby-doll” look. However, it should be noted that the “fox face” Pomeranian is mainly used to describe the breed.

Pomeranians come from Pomerania, which is a region between Poland and Germany. Though little now, Poms are the descendants of German Spitz dogs. German Spitz dogs were once bred for sled dogs, which explains the high energy levels that Poms are famous for.

3. Queen Victoria once owned a Pomeranian

Pomeranians have always been popular, especially amongst the nobles and royals in Europe. Queen Victoria once owned a particularly tiny Pomeranian, which eventually became the breed’s standard size.

Temperament & Intelligence of the Pomeranian

Pomeranians are boisterous and alert dogs, often taking center stage wherever they are. They need to know not only what is going on in their environment but to alert you as soon as possible, which is why they’re excellent watchdogs. It’s crucial to train your Pomeranian to stop barking on command since they’ll keep barking and barking until they’re satisfied.

While they can be rowdy, Pomeranians are also quite affectionate. These little lapdogs want nothing more than to spend time with their favorite person, so this isn’t a good breed to leave alone for long periods. This affectionate side may not pour over to visitors and strangers- Pomeranians tend to be wary of any new people. Thankfully, Pomeranians can be happy and friendly with people if they’re socialized immediately and consistently.

Bold personalities aside, Pomeranians are incredibly smart and active dogs. They can easily excel in obedience and are quite willing to learn, but patience and consistency are key. Pomeranians can do so well in training that they’re often found in obedience competitions- and winning them, too. They’re so smart that many Poms have become registered service dogs, which is great for owners looking for a small service dog.

However smart and loving they can be, Pomeranians do have some stubborn tendencies that can turn into full-blown behavioral problems if left unchecked. These dogs can and will take over the household and designate themselves as the boss, so it’s especially important to start training your Pomeranian right away.

Generally speaking, yes, Pomeranians usually do well with other pets. This question is always hard to answer when asking about Pomeranians because their tolerance of other pets can vary wildly. While some Poms get along right away with most dogs and pets, others will be pushy and bossy. Some Poms may also try to bark and chase new dogs, so it’s crucial to introduce your new Pomeranian puppy slowly to any new pet.

Things to Know When Owning a Pomeranian:

Pomeranians may only weigh around 5 pounds, but they have important dietary needs to keep them healthy and strong. Poms need a nutrient-dense diet that is high in protein, especially animal-based proteins like salmon or beef.

Similar to other small dogs, Poms are prone to dental problems that can lead to serious tooth and gum conditions. We recommend finding a crunchy kibble to help clean their teeth and gums, but it should be high in protein and specifically formulated for small breeds.

In addition to dry food, wet canned food is usually recommended for additional calories and nutrients. However, it’s important not to overfeed your Pomeranian as they’re prone to obesity. If you’re unsure of what your Pomeranian needs, consult your veterinarian for a more customized diet plan.

Exercise is one of the most overlooked parts of owning small dogs, even with high-energy dogs like Pomeranians. At a bare minimum, a few short but brisk walks and an hour of playtime in an enclosed area may be enough to keep your Pomeranian happy. However, most Poms will demand “attention” when they’re usually asking for some kind of way to burn off energy.

They’ll also need some form of mental stimulation to prevent boredom and behavioral issues from forming. A puzzle toy is a great way to provide entertainment and instill confidence in your Pom, though they’ll probably figure it out quickly.

Since Pomeranians are naturally energetic dogs, they enjoy running around and have the endurance to do so. Consider taking up agility with your Pomeranian, which they can excel at as well. Find a local dog training center and inquire about any agility programs. Alternatively, you can find agility equipment online and create a course in your backyard!

Training can be a fun experience for you and your Pomeranian. They may not always want to listen, but persistence and consistency are the keys to training a Pom successfully. Positive reinforcement training methods with a mix of low and high-value treats are best for these little dogs, since they’re food-driven and catch on quickly to basic obedience. Pomeranians are very smart and are quite eager to show off their intelligence, so it won’t be long before your Pom knows a handful of tricks. Similar to agility, Poms can do really well in obedience competitions.

One important aspect of training Pomeranians should be focused on the barking, especially if you’re in an apartment building. Pomeranians love to bark and they will gladly alert you of anything they deem necessary, so it’s important to nip the excessive barking in the bud right away. While this may sound difficult, Poms can easily learn to stop barking on command.

Another important part of training your Pomeranian is housebreaking, which can be hard for little dogs and their pint-sized bladders. Crate training is a great way to prevent accidents while reinforcing the idea of “going outside”, but Poms should not be crated for long periods. Since Pomeranians are intelligent, they can be trained to go on puppy pads if crate training isn’t working. However, it’s important not to mix the crate method with puppy pads or you’ll end up confusing your Pom.

Lastly, Pomeranians need early socialization with people and animals to prevent aggressive or possessive tendencies. These dogs love their owners, which can lead to a very bossy, aggressive Pom. Make sure to socialize your Pomeranian puppy right away and to continue socialization throughout its life.

Pomeranians have thick double coats that have moderate grooming needs. They should be brushed at least twice a week to prevent matting, which also helps reduce shedding. Some Pomeranians have coats that may need more brushing out, especially during the shedding seasons. In addition to brushing, Poms can benefit from a bath once every two to three months to prevent foul odors from forming. Some owners may clip or trim their Pom’s coats, but this is usually not necessary. Shaving your Pomeranian down to its skin should never be done unless medically recommended since their coats will struggle to grow back in full.

Aside from a few more serious conditions, Pomeranians are relatively healthy dogs that usually live full, long, healthy lives. However, even with purebred dogs, it’s impossible to know what your Pomeranian’s health will be in ten years. It’s best to prepare for medical emergencies, should any of these conditions develop in your Pom. Here are some of the conditions that Pomeranians are prone to:

Male and female Pomeranians are similar in temperament and personality, so it’s a matter of personal decision. Some argue that males are harder to train, but there’s no definitive proof of this claim. The only potential issue you may face with a male Pom is territory marking, but this can be stopped with proper training. Otherwise, the decision of male or female is a personal preference.

Pomeranians are the firecrackers of the small dog world, having the energy levels of large dogs with the bodies of lapdogs. They enjoy their place as the companion of the household, but they’ll quickly take over if you let them. Regardless of their outgoing and bold demeanors, Pomeranians are still highly sought after. If you have the time, dedication, and energy to keep up with these little Spitz dogs, the Pomeranian will exceed any expectations.