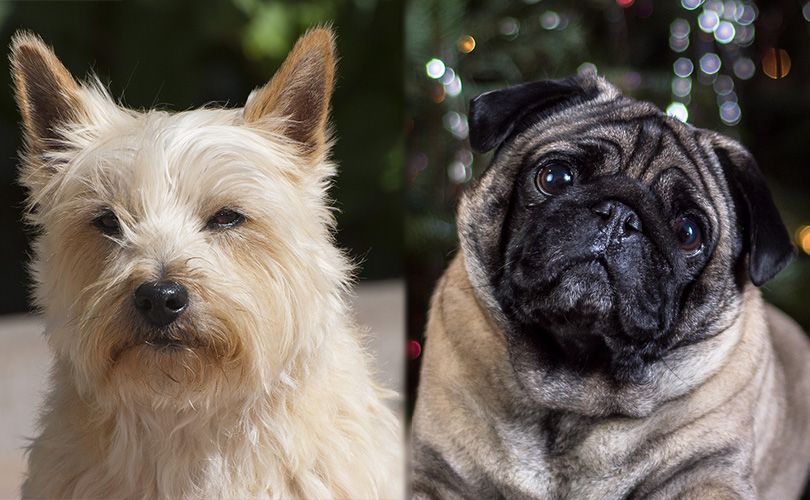 The Pugairn is a mix between the Pug and the Cairn Terrier. These dogs often inherit a mix of traits from both of their parents, both physically and temperamentally. They tend to be mellow dogs and are highly adaptable to any number of living and family scenarios.

A Pugairn will often be a small dog with a Terrier’s fur and a shape similar to that of a Pug. They might have a brachycephalic face or an elongated muzzle that allows them to breathe easier. They have an excellent temperament, with predominant playfulness, and are an overall sweet and patient pup that is low-maintenance in most aspects.

Pugairn Puppies — Before You Buy…

What’s the Price of Pugairn Puppies?

The price of a Pugairn puppy ranges widely based on their overall popularity in the region, the breeder’s reputation, and their parents’ pedigree. The price can be between $500 to $2,000 in the U.S.

The Pugairn is a mixed breed but they are quite popular. Their overall popularity makes them more expensive in some areas. If you are looking for a breeder, you should expect to be placed on a waiting list for a while before adopting one.

Another aspect of the price is the pedigree of the parents. Sometimes, this isn’t as important with mixed breed dogs. However, the Pugairn is a mix of two popular dogs with extensive and impressive pedigrees. If one or both parents have a pedigree or well-bred lineage, then expect your puppy to be more expensive.

The overall reputation of the breeder can also play into their price. A breeder who commits more money to feed the dogs well and take care of them will have higher prices.

To ensure that your breeder of choice is taking care of their dogs the way that they should, ask to get a tour of their breeding facility. They should be willing to take you into any area that the dogs can access and show you the cleanliness and methods for which they care for their pups.

If your puppy is supposedly coming from dogs with good pedigrees, then ask to see their papers and certifications. It is also good practice to look into the parents’ vet records to become aware of any genetic predispositions that your puppy might have.

3 Little-Known Facts About the Pugairn

1. The Pug was treated like royalty for many centuries in ancient China.

The Pug is one of the oldest breeds in the world for which we have a recorded history. They used to be medium-sized dogs and were the dogs of the Han dynasty, kept in the Imperial Palace, and treated like royalty. They were revered so much that they were often provided with personal guards to keep them safe.

After centuries of this treatment, globalization influenced their spread worldwide, and they arrived in Europe during the 1500s. The Dutch traders had a considerable influence in their spread, and they quickly became popular as gifts to royalty. Pugs found their place into the laps of the nobility once again across Europe.

Some of the most famous people in history, especially in Europe, have owned Pugs. Marie Antoinette was said to have one that came with her everywhere. Josephine, the first wife of Napoleon Bonaparte, also had one that she was devoted to, though Napoleon is rumored to have despised the dog.

Finally, there was Prince William of Orange. The dog was said to have saved his life at one point, and thus, the Pug continued to grow in popularity.

These dogs didn’t find their way to America until after the Civil War. They were one of the earlier dogs to be recognized officially by the American Kennel Club in 1885 and have remained one of the most popular dogs in America, ranking 28 out of the currently recognized 196 dogs. This love is what generates the many mixed breeds with the Pug as one of the parent breeds.

2. Cairn Terriers have typically been more of a working pup.

Cairn Terriers originally come from Scotland, specifically the Isle of Skye. There is no detailed record of their breeding or origination, but the generally accepted idea is that they have been around since the 16th century.

These adorable little dogs were a beloved pet in the area and useful dogs on the island and then the mainland. They were used in the rocky mountainsides and cliffs to trap prey in the holes and bark until their humans came to collect. Holes in Scotland were also called cairns, which is how these dogs received their name.

Cairn Terriers excelled at their job of trapping and alerting because of their larger front paws. They can quickly dig into the earth and squeeze their small bodies into the hole. They have the characteristic of fearlessness to top off their overall lovability.

For many years, these Terriers were considered the same as the Scottish Terrier and the West Highland Terriers. It wasn’t until the early 1900s that devotees of the different Terrier breeds began breeding them separately and instating breed standards.

3. The Pugairn tends to inherit some of the sweetest personality traits from both parents.

The Pugairn was bred because of the overall lovability and popularity of both of the parental breeds. Pugs also tend to be bred with dogs that have a longer muzzle. There’s a greater chance of the puppies being born without a brachycephalic face.

The Pug’s smushed face can make it difficult for them to breathe and can lead to other issues with their digestive system. Breeding puppies to get rid of this but still have the affability of the Pug is often a primary goal in Pug crosses.

Temperament & Intelligence of the Pugairn

Pugairns are a relatively new hybrid breed. They do not yet have an established breed standard in terms of their personality or even their appearance. However, looking at the characteristics of their parents, it is easy to get an idea of what your puppy is going to be like.

Since Cairn Terriers are brave and both the Pug and the Terrier are extremely loyal and devoted, Pugairns are valiant protectors even with their small size. They can often also have a bold character, defending what they want or what they think is right. They are rarely aggressive because they have an overall attitude of curiosity combined with a general friendliness.

The clownish personality of the Pug is even more lovable in a Pugairn because they have the bubbly energy of the Cairn Terrier. They will often be able to go out for more intense exercise than a Pug and are more robust and healthy.

These little dogs are excellent family dogs. They are so adaptable and accepting that they can put up with the rougher play of children, easily keeping up with their energy. They are also always ready for a snuggle and want to be best friends with everyone they encounter.

The Pugairn likes to make friends with anything. They tend to get along with any dog, cat, or other animal. If you have very small animals, such as rodents, then you will want to be careful, socializing them slowly and steadily. The hunting instinct of the Cairn Terrier might cause them to react negatively toward these animals.

Things to Know When Owning a Pugairn

The Pugairn is a dog that needs a moderate amount of activity and is quite a small pup. They only need about 1-2 cups of food each day. It is important to feed them a diet with high-quality food. Pugs tend to struggle a bit more with obesity and gain weight quickly if they are fed many additives. They can also be susceptible to food allergies, so if you switch out their food, observe them carefully.

Even though Cairn Terriers have a high aptitude for exercising more, Pugairns do not need much exercise each week. They are not lazy dogs and like to get the chance to get out and explore.

Pugairns love to go out for walks, hikes, or explore anywhere that you have time to take them. If you are going to take them out for walks during the week, try to hit at least 7 miles each week. They need about 45 minutes of activity each day.

A Pugairn is easy to train. They are committed to your happiness, and knowing that they satisfy you will make them happy enough to keep doing well. Make sure to award them with plenty of praise and affirmation because that will let them know that they are doing well.

Grooming tends to be low-maintenance with this breed. They tend to inherit the short, more wiry coat of a Cairn Terrier. They should be brushed at least once a week to reduce the amount of shedding that they do around the home. They might also need a bath every 6 to 8 weeks because they can have a bit of a doggy smell.

Beyond grooming their coat, they need attention directed to their ears, nails, and teeth. Clip their nails about once a month. If you can hear them clicking against hard flooring while they walk, it is time to clip them.

Since Pugairns can have floppy or erect ears, depending on which parent they favor, you might need to clean them out more often. With floppy ears, clean out any moisture and debris. The same goes for erect ears, but you will not need to do it as often to prevent ear infections. Brush their teeth at least once a week to reduce the chance of dental issues as they age.

Pugairns can inherit the brachycephalic faces from their Pug parents and thus be more susceptible to respiratory and digestive issues. If not, they tend to be healthier. Either way, maintain their annual vet checkups to catch any issues early.

There are no recognizable differences between a male and a female Pugairn.

If you need a pup that will fit in well with your family or suit an apartment situation, then the Pugairn is a good option. Although they are not always the most affordable hybrid mix, they are a sweet-natured dog that loves to be around their family and make them happy.

10 Most Popular Dog Breeds by State