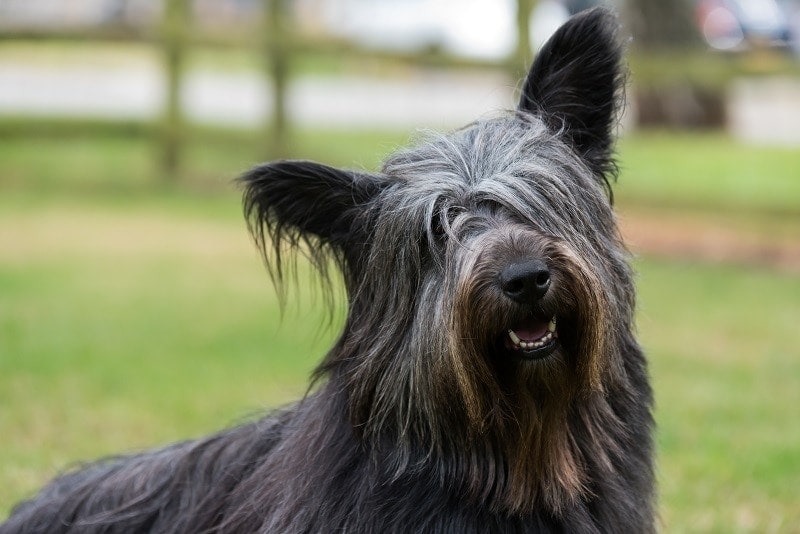 The term “terrier” covers a vast selection of dogs bred for hunting—a characteristic that has not left the terrier gene pool. Most terriers still today love digging, chasing, and stalking prey. But how do they differ? Some are larger and some are smaller. Some have long hair, others have short hair, and some even have no hair. Some are prudish, some are peppy, some are pushy. One thing is for sure, these cute faces will be sure to stay in your memory for days to come.

The 12 Types of Terrier Dogs:

Airedale Terriers have the look of a proper gentleman, with stiff posture and a long-bearded snout. They are the largest of all the terrier breeds and weigh an average of 40-64 pounds.

These dogs are incredibly intelligent and full of life. They are generally very docile, patient and alert with children. They are very devoted, doting, and trainable, making them suitable for most families. They love to play and require attention to channel their exuberance properly.

While enthusiastic, Airedales can also be destructive. If they have no proper outlet, they can dig holes in yards and destroy personal property in the home. They can also be defensive and predatory. Therefore, it is better if they are well socialized early on.

Related Read: How Much Does an Airedale Terrier Cost? (2021 Price Guide)

Bull Terriers are quite famous, having roles in movies and commercials throughout the decades. They are instantly recognizable, as they have egg-shaped heads and often a bullseye around their eye. These stout brutes are small to medium-sized and weigh an average of 50-70 pounds.

They are known for their beautiful personalities, being both entertaining and charismatic. They are brilliant and tremendously loyal pets. In addition to their loving nature, they are also highly protective of family members, making excellent guard dogs.

Because of their powerful builds, it is imperative to seek proper training. They can show aggressive tendencies and will need to learn manners and restraint.

The lifespan of a Bull Terrier averages 10-14 years. The most significant health issues with this breed are patellar luxation, which is a dislocation of the kneecaps. They are also known to have allergies, heart complications, and deafness.

The Jack Russell is quite a popular terrier breed known for its distinct looks. They are smaller dogs and have a lean, muscularly athletic frame. The average weight of one of these adorable balls of energy is between 13 to 15 pounds.

Jack Russell dogs are quite hyper and agile, requiring plenty of exercise. They make great pets for children, as they can match their energy very well. They are fiercely loyal and happy-go-lucky. Their spunky personalities can be challenging, but when trained correctly, they are fantastic companions.

While brave, their fearlessness can get them into trouble. They have high prey drives, making them incompatible with much smaller animals. Their hunting instinct is not able to be conquered, even with guidance. They are known to be diggers, so securing fences and enclosures is a must.

The average lifespan of a Jack Russell terrier is between 13 and 16 years. Common health problems that are seen in this breed include Legg Perthes, dislocated knee joints, deafness, and issues with sight.

The Cairn Terrier is a shaggy-coated, small-statured dog with dark doe eyes. They are lengthy and short-legged with an intact tail. On average, they weigh between 13 and 14 pounds and are one of the most popular types of terrier dog breeds.

This breed can be bossy and demanding. Due to their playfulness, they can be a perfect match for children. They love romping around and can serve as fantastic playmates. They are also highly affectionate and attentive to their owners.

They have quite a high prey drive, posing as a potential threat for smaller animals. They may do well with cats if they get to know them from puppyhood. If raised with other dogs, they will adapt. However, they can sometimes challenge strange dogs, so caution must be applied.

Cairn Terriers have an average lifespan of 14 to 16 years. Health-related concerns seen in this breed include cataracts, allergies, and heart defects.

Scottish Terriers are likely one of the most recognizable terrier breeds. They carry themselves with a proper, chivalrous stride and have long, flowy beard. They weigh an average of 18-22 pounds.

Scotties are very dapper and put-together. They have an aloofness about them, which leads to them taking watchdog duties very seriously.

Because of their deep incline to please you, they are quite sensitive to approval and disapproval. They are brainy, playful, vocal, and friendly. They are typically friendly with strangers and good with children.

Scottish Terriers live an average of 12-15 years. Health issues often seen in this breed are neurological problems, certain types of cancers, and deafness.

American Pit Bull Terriers may have gotten quite a bad rap in recent years, but they are smiley sweethearts. This muscly dog may come across as intimidating due to their stance and reputation. They are one of the larger terrier breeds, weighing an average of 30-60 pounds.

They were once known as “nanny dogs” due to their docilely gentle demeanor with children. They are generally goofy, playful and eager-to-please. Their energy levels may be high, but they also enjoy cuddling and lounging with their humans.

If well socialized at a young age, they can do very well with other animals. If not, they may show aggressive and territorial behavior. They also have alpha-like tendencies that will need proper guidance. Typically, they do not instigate a fight, but they will finish one when provoked.

The average lifespan for this breed is 8-15 years. They have common health ailments such as skin allergies, hip dysplasia, and heart defects.

You may notice the Boston Terrier by their flat muzzles, pointed ears, and tuxedo coats. These little guys stay quite light, weighing between 12-25 pounds.

This breed is vivacious and affectionate. They enjoy many activities with their humans and love to accompany you wherever you go. That trait makes them awesome to have as travel buddies.

They are gentle and sweet-spirited. While not the best guard dogs, they will alert you if something is not right. Most have terrific dispositions and get along well with unfamiliar people and pets.

The average lifespan for this breed is between 13-15 years. Common health issues seen with Boston Terriers are cataracts, glaucoma, and patellar luxation. Because of their short snouts, they are also prone to brachycephalic syndrome.

Yorkshire terriers are known for their long silky hair and petite builds. While they may look cute and cuddly, they are quite spirited and spunky. Even though they are little, weighing an average of 7 to 15 pounds, these guys pack a punch.

Yorkies can be very animated and independent. With other animals, they can sometimes suffer a small dog complex, defending their personal territory unnecessarily. Because of their low tolerance for annoyance, they aren’t suitable for young children or overbearing animals.

While they can be quite finicky and picky about who and what they enjoy, they love their owners. They are notably affectionate with familiar faces. They also make great apartment dogs due to their size and temperament.

The American Hairless Terrier truly is hairless, yet their skin can have a wide variety of colors and patterns. This breed is not very common, ranking 136-193 on the AKC’s popularity list. They are relatively small, weighing an average of 12-16 pounds.

This breed is very vigorous, bright, and curious. They make lovely additions to the family and do quite well with strangers. They can be quite vocal and are quick to alert owners of potential threats.

Because these dogs are hairless, owners will need to be well-educated about the breed. They will need to be shielded from the sun, as they can sunburn. They are also particularly affected by extreme temperatures due to their bare skin.

Welsh Terriers are similar in looks to the Airedale Terrier. While very comparable in build and color, they are smaller than their Airedale cousins. They weigh an average of 20-22 pounds.

This breed has an extreme lust for life. They are joyous and happy, having a good time no matter what. Their peppy nature makes them ideal for large families with active lifestyles.

While they will be your best pals, they do have a natural desire to hunt. This may put small animals in harm’s way, both wild and domesticated. It will serve them well to be socialized early with dogs and cats. But no matter the training, they may never do well with smaller animals.

Welsh Terriers live an average of 12-15 years. They have a few prevalent health concerns but may suffer from eye issues, hip dysplasia, and epilepsy.

Sealyham Terriers are one of the less common terrier breeds. While not as popular, they are both fluffily cute and compact. They are long-bodied and small in stature, weighing an average of 20-24 pounds.

Because of their stubborn and independent personalities, Sealy’s require firm and consistent reinforcement. Other than them being a bit overbearing, they are wonderfully charming pets. They are loving and humorously spirited, providing years of entertainment for owners.

Even though they have nothing but love for their families, they don’t share the same sentiment with strangers. They can be reserved, standoffish, or even territorial with newcomers. If introduced early on, they can be very good with children and other pets.

Sealy’s have an average lifespan of 12-14 years. While health concerns are few, some include retinal dysplasia, lens luxation, and deafness.

Norwich Terriers may be small, but they are stocky. They have a long, wiry coat to the touch. They are among the most miniature terrier breeds, weighing a maximum of 12 pounds as adults.

Norwich Terriers do best with positive reinforcement when training. They are stubborn but love to please. Therefore, it can be quite easy to teach this lovable little bruiser. They love to run around and enjoy interactive games. Even though they are energetic and lively, they do best with older children.

They can be a bit cautious about new people. It is best to involve strangers and animals as soon as possible. They are highly inquisitive and love to chase, so they will need to be leash trained or in an enclosed area to prevent venturing off.

The average lifespan of the Norwich Terrier is 12-14 years. While they are generally healthy, health complaints of this breed involve hip dysplasia, allergies, and seizures.

We have covered the rare, the common, and even the famous terriers. Each of these breeds has its own quirks and distinctiveness, separating them from the rest. While most may not be used for their original purpose anymore—hunting—they do make wonderful family members.

When Will My German Shepherd’s Ears Stand Up?