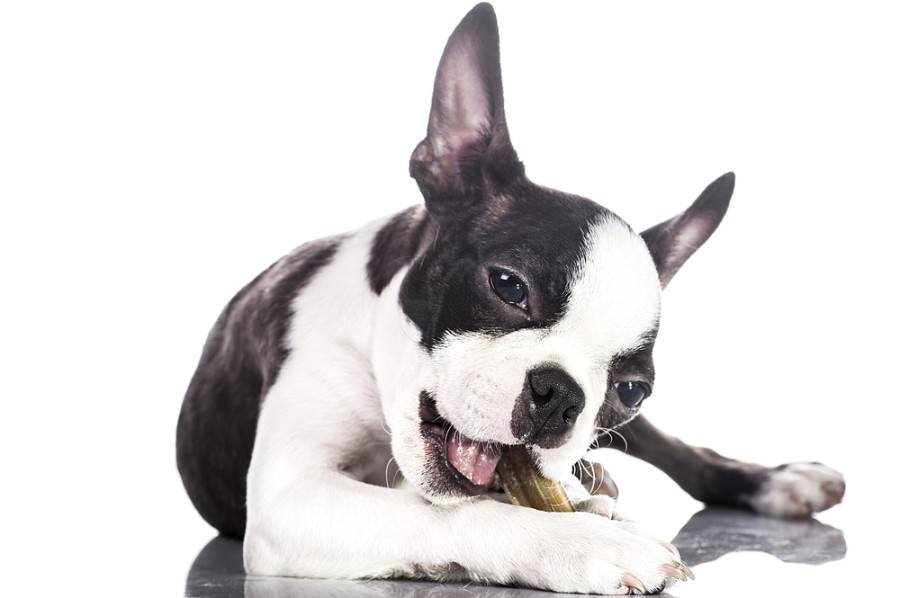 The Boston Lab is a hybrid mix of the Boston Terrier and the Labrador Retriever. They turn out to be a medium-sized dog that sits right in between the two sizes of both of the parental dogs.

The Boston Lab combines the best personality traits of both the Terrier and Retriever to end up with a playful, happy dog that is quite loyal and loves a good cuddle. They are great listeners — although they won’t always obey what they hear.

Boston Labs have eager personalities that make them happy to please their favorite people. They love to be rewarded and lap up any positive attention they can find. They are typically calmer than the Labrador, but they still need enough activity to keep them from loneliness and boredom.

Boston Lab Puppies — Before You Get One

3 Little-Known Facts About the Boston Lab

1. They are part American gentlemen and part hunting heir.

The Boston Lab is a unique mix of animals. The Boston Terrier was originally bred in the 19th century as a fighting dog. They weren’t as small as they are now and had more aggressive tendencies bred into them.

They are currently known for having a tuxedo-colored coat, which has given them the nickname of the “American Gentleman.” This name is also fitting because they were among the first 10 dogs recognized by the AKC.

Labrador Retrievers are one of the few breeds that originate from North America, hailing from both Canada and the United States. Since their beginning, they have been used as hunting dogs and have always been affectionate and highly trainable.

Boston Labs inherit a waterproof coat from their Boston Terrier parents. Their coat makes them excellent swimmers. They love to spend time in the water and will jump right in.

3. These dogs tend to have what is known as a “soft mouth.”

The Labrador Retriever was used as a hunting dog for years. Part of this preference was because of their high trainability, but another was due to their “soft mouth.” It meant that they were good at retrieving prey without harming them in the process. Where other dogs would end up ripping them apart, the Labs carefully brought the bird or animal to the hunter.

Temperament & Intelligence of the Boston Lab 🧠

The Boston Lab is a happy, energetic, affectionate dog. They learn quickly and have a high desire to please their trainer. They are attentive dogs, sitting and seemingly listening to all that you have to say. That attitude is part of what makes them a good companion dog.

This breed is intelligent. If they are left alone for a long time, they tend to get into mischief. They enjoy feeling like they are part of a pack, but they are one of the few breeds that appreciate having a fair pack leader.

They form bonds quickly in life and should be trained and praised as early as possible to keep their attention and become close to each other.

These dogs are a lovely choice for families. They have a great deal of patience and kindness in them, making them a happy companion for kids of practically any age. Their size makes it difficult for them to accidentally do any harm to young kids, but they are big enough where young children have a harder time accidentally hurting them as well.

Since these dogs are so active, adventurous, and social, they enjoy being included in as many family outings as possible.

These dogs typically get along well with any other animal in the household or out and about. Labrador Retrievers were meant to retrieve, so they don’t have much of a prey drive bred into them.

Although the Boston Terriers were initially used for fighting, hundreds of years of breeding have created an extremely mellow and friendly dog. Their combination makes them highly social.

They prefer to have another dog or even a cat around to play with during the times that people are out of the home.

Socialize them early on to guarantee friendliness and appropriate behavior around other animals.

Things to Know When Owning a Boston Lab

Although these dogs are only a small to medium-sized breed, they have such a high activity level that they go through a large amount of food.

Boston Labs eat around 2-3 cups of food every day. Make sure to talk to your vet about their daily requirements, since it changes based on their size and activity levels.

Both Boston Terriers and Labrador Retrievers quickly gain weight if they eat too much without exercising enough. A good method to use to avoid this is to portion their meals out, never free-feeding them.

Give them two or three meals a day. Keep them on a schedule to get their digestive systems accustomed to mealtimes.

Boston Labs need about 120 minutes of exercise each day. Part of this can be lowkey, taking shorter walks in the morning and in the evening.

The rest of it should be at least one good trip to get a strenuous activity. Engaging activities can be going to a dog park, hiking, or running. They should walk or run around 9 miles a week to keep them healthy.

Since this breed is so intelligent and loving, they are highly trainable. They like to be able to please their trainer, especially when they have been rewarded with positive reinforcement.

With early socialization, they can get along with any family members and other animals. They like to be around kids and are not especially vocal. They might need training if they start to get protective of the house or jump on strangers.

The Boston Lab inherits a short coat from both of their parents. This means that they don’t need much maintenance. They only need to be brushed once a week with a bristle brush or a pin brush.

They do love the attention, though, so consider rubbing them down with a soft damp cloth to get the coat to shine and the puppy to smile.

Pay attention to the length of their nails, clipping them whenever they need it. Brush their teeth at least once a week, preferably once a day to avoid any dental issues. They can inherit mouth and dental problems from the Boston Terriers.

Boston Terriers are brachycephalic, meaning that they have a pushed-in face typical of Pugs and other terriers. This facial formation causes them quite a few problems, particularly respiratory and dental problems.

When Boston Terriers are bred with other dogs like the Lab, they gain a longer snout and lose much of the proclivity to suffer from such health issues. However, keep an eye out by taking them to a vet at least once a year.

Although there is not a highly established size, males do tend to be larger than females. Males are also commonly taller and weigh closer to 50 pounds. Females commonly weigh between 25 to 30 pounds.

The only other difference between the two is the level of territoriality. Males are commonly more territorial than females and might need more socialization training.

Final Thoughts on the Boston Lab

This forever-happy dog loves to be a part of the family, being affectionate to every member of their pack. They do need to realize that they are not the alpha, and then training will run much smoother.

Start your training and bonding early with this puppy, and you will both benefit from it. Either way, they will always love to play and bound about, so try to incorporate games into their daily training sessions.

If you are looking for a great pup to add to your family, consider this one. As long as you are active, they will be happy and content participating with everyone and having a great time.