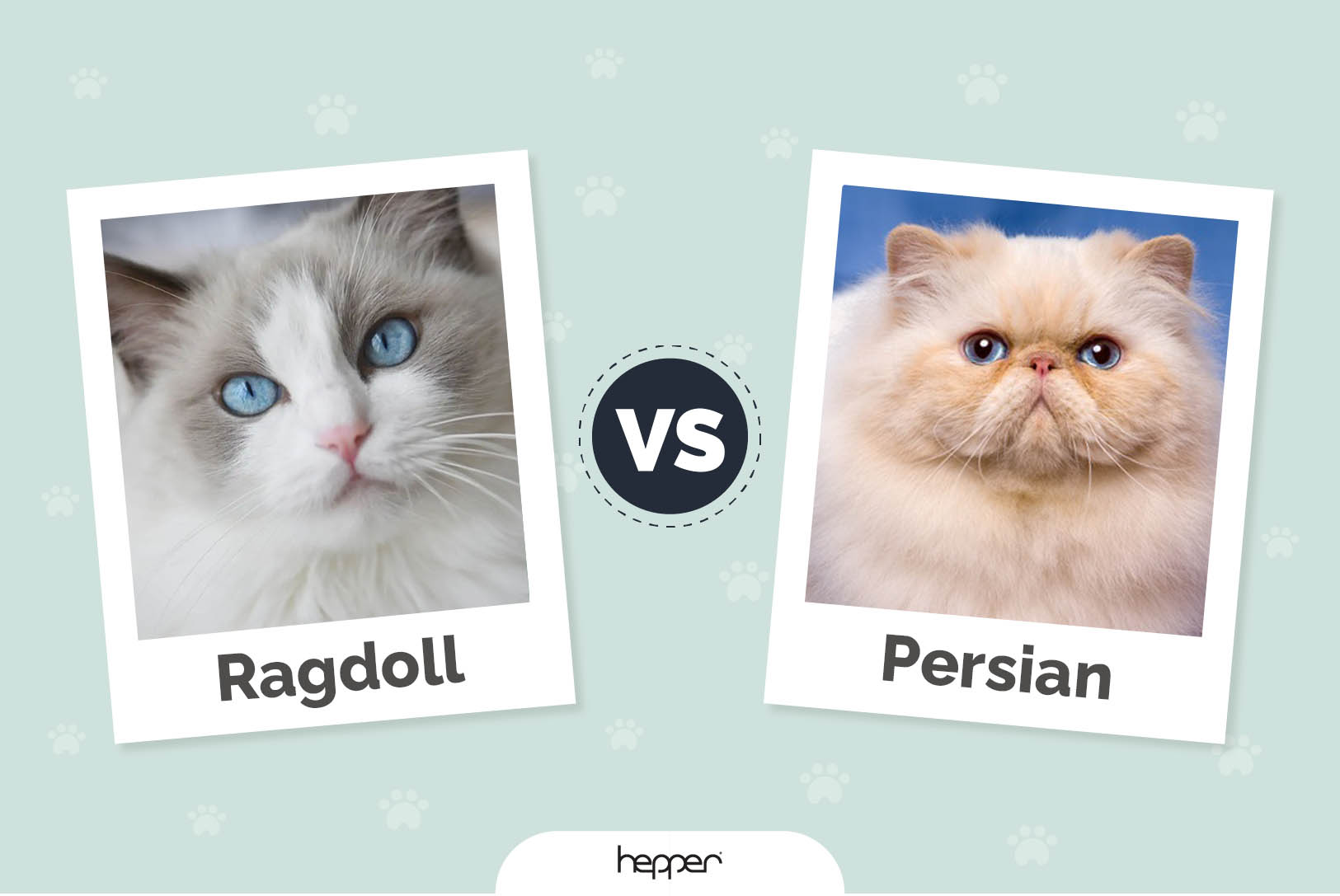 However, these two breeds also share a lot of similarities. They are both considered quite demanding cats that require attention from their humans, although the Ragdoll is a lot more accommodating and less needy. They are also both thoroughbred cats and recognized by most catteries and cat registries in the world.

Read on to find out more about these two beautiful cat breeds and to determine which would prove the better fit for your life and your requirements.

The Ragdoll is one of the newest cat breeds, having been first bred in the 1960s. It is a very large cat, weighing up to 20 pounds when fully mature, and got its name from its laid back and very relaxed attitude. It is a friendly breed that can be a little talkative and that enjoys spending most of its time on the ground. They do love attention and can throw themselves back into the arms of their owner, giving yet more credence to the breed’s name.

The Ragdoll is a very new cat breed. It was bred from a Persian and a Birman-type cat in the 1960s and originates from California, USA. The breeder credited with the birth of the Ragdoll is Ann Baker. The breed gets its name from the fact that when picked up, it goes floppy and falls into the owner’s arms like a ragdoll. Legend has it that the breed’s floppiness stems from the fact that one of the original breeding cats had been in a car accident and couldn’t feel pain, although this is impossible because such a trait would not be passed on genetically.

The breed has blue eyes, a flat head, and a broad body. Its large paws are tufted and its tail bushy. The breed is not only known for being large, but standards demand a somewhat hefty cat that is muscular and strong looking. Six different coats are recognized as standard: seal, chocolate, lilac, red, blue, and cream, although dilute versions of each also exist.
Temperament

Having been bred as a companion pet, the Ragdoll is a very affectionate and loving animal that loves to spend time with its owners. They are considered gentle and relaxed animals that don’t take a lot of care, although they do need companionship and their coat does require some attention. The breed tends to be very good with children, gets on with strangers, and can be mixed with other cats and even dogs, in a home environment.

Ragdolls have dense fur, but they do not have an undercoat which means that they are less prone to tangling and knotting. You will need to brush two or three times a week to maintain good coat condition, however. The breed does a very good job keeping itself clean but can benefit from a monthly bath. While the Persian has a Brachycephalic, or flat, face, the Ragdool’s face is a standard shape so it does not suffer from tear staining.

Although the Ragdoll is a purebred, it is generally considered a healthy breed. It is prone to some hereditary conditions, however, including hypertrophic cardiomyopathy and polycystic kidney disease. Like most cat breeds, it is also prone to dental issues and obesity.

In contrast to the Ragdoll, the Persian is one of the oldest cat breeds and dates to the 17th Century. They were first bred in Mesopotamia, which later became known as Persia, and is now Iran. It is a long-haired cat that is a medium-sized breed. This quiet breed can be demanding of attention and struggles if left alone for too long but makes an excellent family companion.

The exact origins of the Persian cat are unknown, but they come from Mesopotamia, now Iran, in the 17th Century. It is believed that they were smuggled to Europe, where they became popular because of their unique looks and their loving nature. Famous owners have included Queen Victoria and Florence Nightingale, and arguably the most famous of Persian cats was Blofeld’s cat in the James Bond movies.

The Persian is a medium-sized cat, weighing approximately 12 pounds when fully mature. They have thick legs, causing many Persians to prefer lower levels and staying on the ground, rather than jumping and climbing to elevated positions. Unlike the Ragdoll, they have an undercoat and overcoat and they come in a great variety of colors. They can also have blue, green, or copper-colored eyes.

Known to be friendly and loving with family, the Persian is not overly demanding and may not get on with strangers until they become better acquainted. They don’t vocalize excessively and are not as playful as the Ragdoll.

When it comes to care and maintenance, the biggest factor in looking after a Persian is that coat. Because it has a dense undercoat, the Persian can become knotted, which is uncomfortable and looks messy. Even with daily grooming, the coat will shed frequently, and you will find stray hairs on clothing and furniture all around the house. This breed also needs regular bathing, typically every month, and you may want to trim the hair around the paws and back end to prevent them from tracking too much litter and other debris through the property.

The Persian is known to live as long as 17 years or more, but they are also considered prone to genetic conditions, especially those concerning their brachycephalic faces. Their small nose means that they can struggle to breathe, and they suffer from teary eyes. You should have veterinary checkups twice a year to ensure the continued health of your Persian cat.

What Are the Differences Between Ragdolls & Persians?

Both breeds are affectionate and loving with family, but the Persian tends to shy away from games and too much activity. The Ragdoll, on the other hand, enjoys playing games and is considered one of the easier cat breeds to train. You may even be able to teach your Ragdoll how to play fetch. For these reasons, the understanding and gentle Ragdoll, is usually preferred as a family cat for households with small children.

Again, the Ragdoll comes out on top, this time for intelligence. The Persian is considered somewhat slow to learn and can be a challenge to train, although they tend to be quiet. The Ragdoll, on the other hand, is described as dog-like in its capacity to learn.

The Persian’s Brachycephalic face and its double coat mean that it is more of a challenge to care for and to keep healthy. It is somewhat prone to respiratory and breathing difficulties, while its coat is more prone to becoming matted and knotted. The Persian also tends to suffer from teary eyes, and the tears can stain if they are not properly and regularly cleaned. However, both breeds do benefit from fairly regular baths, so if you want to avoid cat bath time, you should look at other breeds.

Which Breed Is Right For You?

The Ragdoll and Persian breeds are both considered excellent family pets because they are friendly, sweet-natured, and they have a lot of love for their human owners. They tolerate and even enjoy the company of children, will get along with other pets in the house, and neither breed is particularly vocal, although the Persian is a little more likely to talk to you.

Cat Respiration Rate: How Many Breaths Per Minute is Normal?

How Do Mother Cats Discipline Their Kittens? Cat Behavior Explained