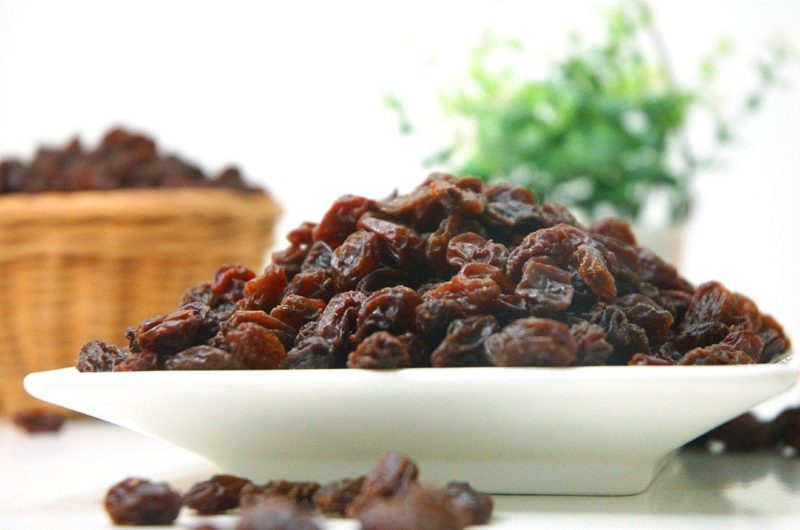 There are quite a few foods that you probably already know not to feed your dog: chocolate, chicken bones, alcohol…the list goes on and on. But one food that doesn’t get as much publicity as some others is also one of the deadliest: raisins.

So what causes raisin toxicity? How many raisins can a dog safely eat? We answer all these questions and more below.

What Causes Raisin Toxicity in Dogs?

Raisin toxicity is one of the most unusual conditions in dogs. The fact is, we don’t know much about it, including what causes it. What’s even stranger is the fact that not all dogs suffer from it. And we don’t just mean not all dog breeds — it’s truly an individual thing.

One dog can eat them and be fine, while another dog will be dead within hours if he doesn’t get to the hospital in time. (We don’t recommend feeding your pup any a raisin to see which group he’s in, either.)

Also, it should be noted that grapes are dangerous and potentially fatal, too, but raisins are more potent.

What Happens If My Dog Eats a Raisin?

The biggest thing you have to worry about is kidney failure and lack of urine production. This can happen in a matter of hours, so time is of the essence.

Other symptoms to watch out for include:

How Many Raisins Can a Dog Eat Before Toxicity Sets In?

There is no amount that is safe to eat. Even the slightest bit can cause toxicity, so if you suspect your dog has had even a single raisin, take immediate action.

What Should I Do If My Dog Eats a Raisin?

The most important thing you can do is act quickly. Start by inducing vomiting, unless your dog is already unconscious, having breathing problems, or showing signs of serious distress. If you can get the raisins out of his stomach before they’re fully absorbed, you may be able to stop the toxins from getting in his bloodstream.

If your dog hasn’t eaten recently, offer him a little food. If he ate a raisin and is prone to toxicity, he shouldn’t be able to hold the food down. Don’t force him to eat if he’s not interested, though.

If that doesn’t work, you’ll need to give him hydrogen peroxide. Using a syringe without the needle or a turkey baster, inject 1 ml of hydrogen peroxide per pound of body weight into the back of his throat, but don’t exceed 45 ml.

Wait 15 minutes. If he doesn’t vomit in that time, try again with the same amount of hydrogen peroxide, but don’t do this more than twice. Regardless of whether he vomits or not, take him to a vet immediately.

What Can a Vet Do?

The vet will induce vomiting if you weren’t successful. If the vet can’t do it, either, or if it’s been too long since the raisins were eaten, they may try to wash out the stomach and give your dog activated charcoal to soak up the toxins.

Your dog will likely need to be hooked up to an IV to flush the toxins from his system and encourage his kidneys to keep producing urine. Your pooch will also likely be given medication to control vomiting and keep his kidneys healthy, and regular blood checks will be performed to monitor his condition.

What Happens If I Wait Too Long?

If your dog gets to the point where his kidneys are no longer making urine, the situation will take a grim turn. Some dogs can be put on dialysis to see if their kidneys will recover, but this is a long shot.

A kidney transplant may be an option, but this is expensive and not always feasible.

Sadly, if your dog reaches this point, there’s often little that can be done other than to put him down humanely.

How Do You Prevent Raisin Toxicity?

Obviously, the best way to prevent this condition is to ensure your dog never eats a raisin. Don’t even bring them into the house if you can help it, but if you must, be very careful not to drop any when eating them, store them where your dog can’t get to them, and make sure everyone in the family knows how dangerous they are for your pooch.

You should also teach your dog the “leave it” command. You can use this to get him to ignore a dropped raisin long enough for you to pick it up. It doesn’t last forever, though, so any raisin you miss could be a ticking time bomb.

If he does manage to eat one, we hope we’ve impressed upon you the importance of taking immediate action.

Despite its lack of publicity, raisin toxicity is no joke. If you don’t want to get stuck with a hefty vet bill (or something much worse), then it’s important to take the condition seriously, and do anything you can to prevent it from befalling your dog.

This may mean cutting raisins out of your diet — but isn’t that a small price to pay for keeping your best friend safe?