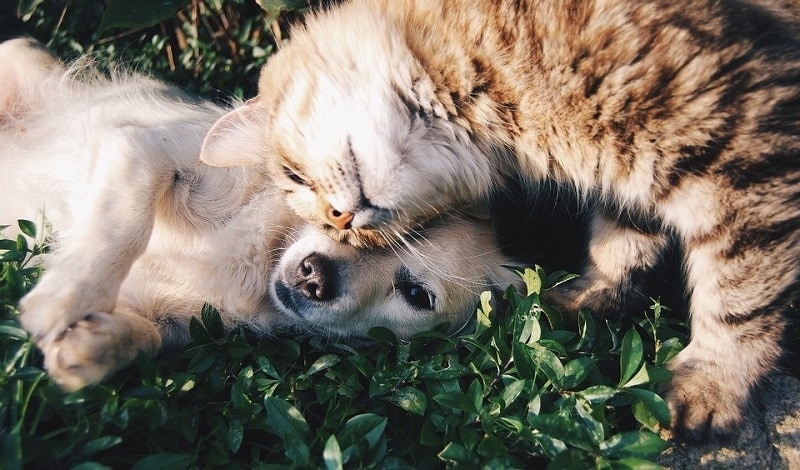 Some ongoing disputes will never be settled: Mac vs. PC, Coke vs. Pepsi, Spy vs. Spy, etc.

However, there’s one age-old debate that we’re ready to put to bed right now: Dogs are definitely better than cats, and we have 13 reasons to prove it.

Now, to be fair, some of these reasons are completely subjective, but that doesn’t make them less true!

So, the next time that someone tries to tell you that cats are the superior animal, you can simply whip out one of these arguments to prove them completely wrong. So why are dogs better than cats? Here are 13 reasons.

The 13 Reasons Dogs Are Better Than Cats:

The first reason why dogs are better than cats is laughter. According to a 2006 study, dog owners laugh significantly more than cat owners do. Laughter is good for the soul, and a goofy pup will have you constantly holding your sides from all the hilarity.

Best of all? Your dog will never laugh at you. A cat, on the other hand, will constantly roast you behind your back — right before acting like you’re still besties just because you cracked open a can of Fancy Feast.

2. You Don’t Have to Clean Litter Boxes

Sure, you’ll have to take your dog outside every few hours to let them do their dirty business, but at least they’re not doing it inside a glorified cardboard box right there in your house. All you have to do is put a bag around your hands, scoop up your dog’s poop, and throw it away.

If your pup pees, you don’t even need to do that much! Also, you can skip picking up the poop if you train your dog to go on your mean neighbor’s lawn across the street (note: don’t do this).

Dogs like their routines as much as anyone, but change won’t throw off their entire lives, like it will with cats. Dogs can roll with the punches, so no matter what the day throws at you, they’ll be ready for it. After all, the only thing that they have on their to-do list is to spend time with their favorite human (and lick themselves).

Cats, on the other hand, will never forgive you if you make them move to a new house. You might think that a cat holding a grudge isn’t a big deal — but just wait until you find the surprise that they left in your new shoes.

You can teach a dog to do just about anything, from fetch the newspaper to play dead. Not only will dogs do anything you ask, but they’re also happy to do it. Again, they put your happiness above their own.

Have you ever tried to get your cat to do anything? If you ask them to do even the simplest task (like get off your laptop), they’ll give you an icy look of death. You don’t have that problem with dogs.

There’s a reason that you’ve never heard the phrase “guard cat.” If an intruder breaks into your house, the only thing that your cat will do is throw up on the broken glass left behind.

6. A Dog Will Come When Called

If you’re having a bad day (or just don’t want to pick up that slice of turkey you dropped on the floor), all you have to do is call for your dog and your problem is immediately solved. A pup will drop whatever they’re doing to come racing to your side at the mere mention of their name.

Try calling a cat. Go ahead, try it. It didn’t work, did it? It will never work unless you also jiggle a bag of treats at the same time — and let’s face it, that doesn’t count.

While most dogs are kept strictly for companionship these days, they’re still not afraid of a hard day’s work. A pooch will fit right in on a farm, in the military, or even on a search-and-rescue team.

Cats don’t like to work. If you try to give them a job, they’ll give you every one of their claws in response (and maybe a few teeth).

8. Dogs Will Keep You Healthy

If you have a dog, you’ll need to get up and get moving. They need to go for walks, they need to run around and get all their energy out, and they need to explore their surroundings. You’ll get in better shape while you’re giving them the exercise they need — a true win-win.

You may be able to walk a cat, but that will likely end in disaster. Instead, the bulk of your activity will involve shooting a laser pointer or flicking a feather on a stick around. Sure, you may end up with super-jacked forearms and index fingers, but that’s the best you can hope for.

9. Dogs Will Introduce You to New People

If you’re walking an adorable dog around, you’ll naturally attract a great deal of attention — and that will give you plenty of opportunities to make new friends.

Cats are naturally withdrawn and mysterious. Do they have friends? If they do, they certainly won’t introduce you to them — and when your friends come over, you’ll have to say, “I have a cat somewhere around here.”

10. Dogs Can Save Your Life

Dogs can be trained to sense all sorts of illnesses, from cancer to seizures. They can alert their owners that the problem exists, giving them plenty of time to do something about it — literally saving their lives, in some cases.

To be fair, some cats can sense cancer and seizures as well. They’re just not as common as their canine counterparts.

According to at least one study, cat allergies are twice as common as dog allergies — and they tend to be more severe too. If you have respiratory issues, you’re much more likely to be better off bringing a dog home than a cat.

12. Dogs Are Always Happy to See You

When you get home from work, your dog will throw a ticker-tape parade celebrating your return. They’ll act like you just came home from winning a war (probably against cats), racing around the house and jumping all over you. It’s a feeling unlike any other.

When you come home to a cat, they may peek their heads out to see if you brought any chicken with you. If the answer is no, they’ll probably yawn and go back to destroying your furniture.

No matter what you do — no matter how badly you’ve failed or how horribly you’ve behaved — your dog will offer you more love than you can imagine. They’ll look at you like you hung the moon. Most people never experience that in any other way.

Cats offer love, to be sure — but theirs is the definition of conditional. They’ll purr and let you rub their bellies, but the minute that stops being pleasurable for them, they’ll turn on you. They also tend to love you more when you’re eating.

While this list may have been devoted to all the reasons that dogs are better than cats, we can’t fault you for feeling differently. Both animals are pretty fantastic, and your life will be significantly better for having either or both of them in it.

Whichever animal you choose to share your life with, just promise us one thing: You’ll adopt them.

Younger Dog Attacking Older Dog? Here’s What to Do!