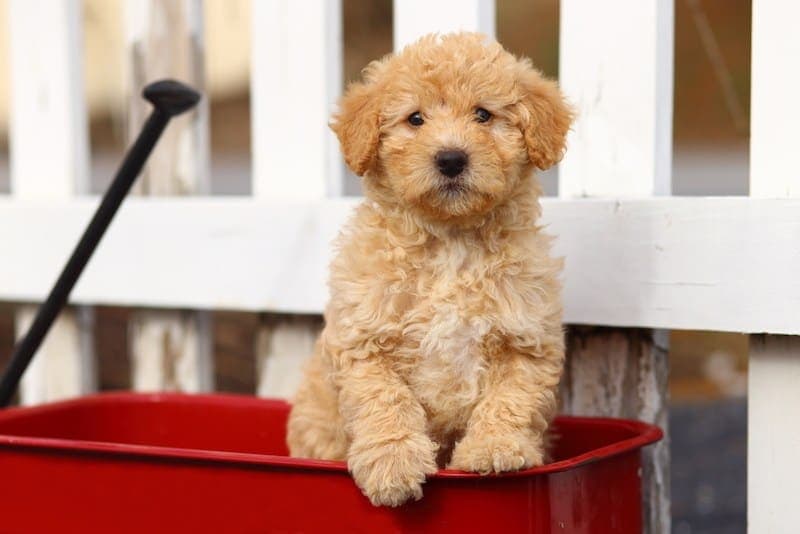 The Redbone Coonoodle is a mixed breed created by mixing the Redbone Coonhound with a Poodle. It may look more like either parent. However, it’s likely to be a medium to large dog with a long neck and long muzzle. It has brown or amber eyes, and a brown or black nose.

The Redbone Coonoodle is an intelligent breed, but the Redbone Coonhound in it may make it challenging to train. This breed is notorious for being stubborn, so an experienced owner is preferred unless you can spring for puppy school or obedience classes.

Redbone Coonoodle Puppies – What You Should Know Before You Buy…

How Much Do Redbone Coonoodle Puppies Cost?

A Redbone Coonhound mix usually costs between $500 and $800 depending on your location and the quality of the breeder. Breeders that specialize in this breed will often charge more but will produce higher quality puppies due to their intimate knowledge of its genetics. The tests they run will increase the cost as will breeding rights. Many times show quality dogs will also cost more.

When choosing a breeder, make sure you can learn about and even meet the parents of your puppy. Doing so can tell you a lot about when you can expect as your puppy grows, particularly in terms of coat color and personality. You should avoid breeders that hide away the parents.

3 Little-Known Facts About the Redbone Coonoodle

1. The Redbone Coonhound parent is a tireless tracker.

2. Owners originally trimmed the Poodle parent’s hair to make it a better swimmer.

3. The parent Poodle was originally bred as a water retriever more than 400 years ago.

Temperament & Intelligence of the Redbone Coonoodle

The Redbone Coonoodle is affectionate and loyal. It’s a good family dog and enjoys children. It’s also very playful and loves games of fetch and tug of war. It likes to follow you around and go for walks.

Thee Redbone Coonoodle is extremely intelligent and can learn quickly when it wants to. Unfortunately, the Redbone Coonhound in him is quite stubborn and known for not following orders. An experienced owner that knows how to train them at an early age is best, but puppy schools can help teach you how to train your pet to behave. Typically, the faster you address bad behavior, the better.

Redbone Coonoodles make great family pets and like when you include them in family functions. They may be a little too big for toddlers, but anyone older than that will likely have a best friend for years. They love to play and will often coax family members into games.

Things to Know When Owning a Redbone Coonoodle

Let’s look at some things you will need to consider before you purchase a Redbone Coonoodle.

The Redbone Coonoodle is a medium to large dog that will require two to three cups of food per day spread out over several meals. Spreading the food out helps reduce the chance your pet will swallow too much air resulting in a potentially life-threatening condition known as Bloat. It also helps keep your pet from developing digestive issues and helps prevent obesity.

We recommend a high-quality food fortified with vitamins and other essential nutrients that will help your puppy grow into a healthy dog.

The Redbone Coonoodle is a moderately active dog that will require about 45 minutes of exercise per day to ty healthy and ward off obesity. They enjoy going for walks, running in the park, and playing fetch. A household with children can often provide enough exercise each day while they play, but if you don’t have children, you’ll need to set aside a little time each day to help your pet stay fit.

The Poodle parent is extremely intelligent and easy to train; however, the Redbone Coonhound can be stubborn and even defiant. The Redbone Coonoodle has the capacity and intelligence to be an obedient, well-trained pet, but achieving that goal is dependent on which parent the puppy takes after more, as well as the experience of the owner. Enrolling your pet in Puppy classes is the best way for an inexperienced owner to learn how to train properly to achieve maximum results.

The amount of grooming your pet requires will also depend on which parent they take after more. The Poodle sheds very little, while the Redbone Coonhound is a moderate shedder, and their coat also tends to develop a musty smell requiring frequent baths.

The ears of your Redbone Coonoodle will need frequent cleaning and drying to avoid ear infections that often result from too much moisture sitting in the ear. Tooth brushing is another requirement to help keep your pet’s teeth and gums healthy. When brushing, always use dog toothpaste, as many kinds of human toothpaste contain the artificial sweetener Xylitol that can be deadly to dogs.

Mixed breeds often have far fewer health problems than pure breeds because due to selectively breeding. However, there are still a few common problems that we’ll look at in this section.

Entropion is a painful condition that causes the dog’s eyelid to roll in on itself. As the eyelid rolls in, it rubs on the cornea. This rubbing can cause corneal ulcers, tears, and can even result in pigment deposits on the cornea, which can blur your pet’s vision. Symptoms include holding the eye shut, excessive tearing, and squinting. Surgery is usually required to fix Entropion.

Corneal dystrophy is a term used for a collection of conditions that result is a foggy or hazy cornea. It is a genetic condition that can reduce vision, cause pain, sensitivity to light, squinting, and may cause patches of white or grey to appear on the eye. There is very little treatment for this condition, and many times it does not affect the dog’s vision.

Hip Dysplasia is a common problem in many larger dogs, and the Redbone Coonoodle is no exception. This genetic condition affects the way the hip joint forms, which prevents the leg bone from moving smoothly. As the two bones rub together, they begin to wear out and deteriorate. Improper nutrition and obesity can make Hip Dysplasia progress faster. Symptoms of this condition include a decreased range of motion, difficulty getting up from a resting position, and a swaying gate. In some cases, surgery can help, as can modifications to diet and physical therapy.

Coonhound Paralysis is a condition that affects the nerves of your pet, often caused by a reaction to raccoon saliva but can also occur in pets that have not encountered a raccoon. Symptoms include a stiff leg that spreads to all four legs. They may also experience slowing reflexes and decreased muscle mass. Treatment includes intense physical therapy and can include hospitalization.

There is very little difference between the male and female Redbone Coonoodle. Both are typically the same size and weight and have similar temperaments. The biggest factor contributing to size and behavior is which parent the puppy takes after.

The Redbone Coonoodle is an intelligent and attractive breed that’s great for families and large homes. They are better suited to experienced owners, but new owners can still enjoy them if they exercise plenty of patience or get help from puppy classes or obedience training.

We hope you have enjoyed our look at this little-known mixed breed and have learned something you didn’t know before. If we have helped you find your next pet, please share this complete guide to the Redbone Coonoodle on Facebook and Twitter.